We carry authentic Germany Flags in both indoor and outdoor varieties. Our flags are proudly made in the United States from durable nylon and are printed with vibrant long-lasting inks. The Germany national flag is often displayed at embassies, outside of businesses associated with Germany, and at the homes of people who take great pride in their German heritage.

Our indoor flags are finished with a pole hem and your choice of with or without golden fringe. Gold fringe is the traditional way to display an indoor flag, however, some people choose without fringe for a simple and clean look that is also less expensive. If you are looking for a complete indoor presentation set, our Build Your Own Indoor International Flag Set program allows you to select a durable nylon indoor Germany Flag and choose between premium quality poles, bases, and ornaments, and tassel. For indoor applications, most buyers choose a 3ft. x 5ft. flag with an 8ft. pole, however, if you have a low ceiling, you may opt for a 7ft. pole, which is designed to work with drop ceilings. If you are looking for a very substantial international flag display, our 4ft. x 6ft. indoor flags can be paired with a 9ft. pole for our largest indoor display option.

Our outdoor international flags are finished with a canvas header and brass grommets and are offered in four sizes: 2ft. x 3ft., 3ft. x 5ft., 4ft. x 6ft., and 5ft. x 8ft., to fit any sized flagpole. Typically, outdoor flags are flown outside of government organizations, businesses, and institutions on in-ground and wall-mount flagpoles, however, some people also buy these flags to display their international pride at home. If you are looking for a wall-mount Germany flag set to display outside of your home, our Build Your Own Outdoor International Flag Set program will allow you to choose between premium quality 6ft. poles and brackets to display the Germany Flag on your front porch. Outdoor flags can also be displayed indoors on interior walls of your home with screws anchored in the wall to attach to the grommets.

In addition to the flags we offer for purchase, we maintain an archive of the audio and lyrics of the Germany National Anthem, historical information about the Germany flag, demographic data about Germany, and free high resolution images of the Germany flag for use in projects and on websites. 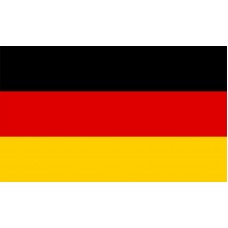 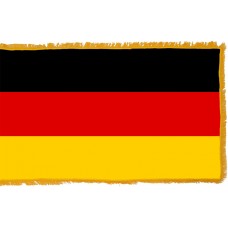 History of the German Flag

The German Flag was adopted as the national flag in 1919 and features three horizontal bands with the colors, black, red, and gold. There are many different meanings and interpretations of the colors that are used on the flag. The black and gold colors are thought to be used as they are the same colors on the coat of arms of the Roman Empire (Germany was part of the Roman Empire until 1806). The colors of the German flag were also the colors that were worn by the German soldiers during the Napoleonic Wars as their uniforms were black coats with red braids and gold buttons. It is also claimed that following World War I, the colors of the flag represented the "Centrist, Republican and Democratic" political parties. The German Flag, seen as a whole, represents the unity of Germany and the people, but the colors separately represent, generosity (gold color), bravery and strength (red color), and determination (black color).

The current flag that is used today, was first used in 1848 as the German flag. In 1871, when Bismarck (Prussian Prime Minister) took control of the country, the flag was changed but re-adopted again in 1919 when Germany became a republic. In 1933, the flag was changed once again following the takeover of Germany by the Nazis and was re-instated in 1949, following World War II.

Germany is a country in Central Europe that shares borders with Denmark, Poland, Czech Republic, Austria, Switzerland, France, Luxembourg, Belgium, and the Netherlands. The capital city of Germany is Berlin. It is a country that has much history and endured many wars and troubles. During the very early years of Germany (formerly known as Germania), it was a country that consisted of small states that were ruled by Kings. In 1618, following the "Thirty Years War," it was divided into Bavaria, Saxony, and Prussia.

In 1815, after the Napoleonic Wars, Germany became a very successful country and grew, resulting in its unity in 1871. In 1914-1918, during World War I, Germany fought against Great Britain, Russia, France and America but they were defeated which led to the German Monarchy being demolished. In the 1930s, during the Great Depression, Germany was no longer a successful country as the economy suffered majorly and by 1933, six million people in Germany were unemployed.

In 1933, when Hitler gained power, he promised to make Germany the successful and great country that it was before and established his first concentration camps in Germany before and during World War II. World War II ended in 1945, and, as part of a settlement with the Soviet Union, Germany was divided into two countries, "East Germany" and "West Germany" and the two countries were not united until 1990, following the Cold War. Germany now, despite its history and many tragic wars, is the largest economy in Europe and is also the second most populated European country.

The Song of the Germans (Das Lied der Deutschen)

We offer free images of the Germany Flag in four sizes (small, medium, large, and high resolution). These images are distributed royalty free for both personal and educational use and are ideal for use in projects and on websites. If you choose to use one of our images, attribution is appreciated, but not required.

The following html code snippets can be copied and pasted to add an image of the Germany Flag to your website: