Our indoor flags are finished with a pole hem and your choice of with or without golden fringe. Gold fringe is the traditional way to display an indoor flag, however, some people choose without fringe for a simple and clean look that is also less expensive. If you are looking for a complete indoor presentation set, our Build Your Own Indoor International Flag Set program allows you to select a durable nylon indoor United Arab Emirates Flag and choose between premium quality poles, bases, and ornaments, and tassel. For indoor applications, most buyers choose a 3ft. x 5ft. flag with an 8ft. pole, however, if you have a low ceiling, you may opt for a 7ft. pole, which is designed to work with drop ceilings. If you are looking for a very substantial international flag display, our 4ft. x 6ft. indoor flags can be paired with a 9ft. pole for our largest indoor display option.

Our outdoor international flags are finished with a canvas header and brass grommets and are offered in four sizes: 2ft. x 3ft., 3ft. x 5ft., 4ft. x 6ft., and 5ft. x 8ft., to fit any sized flagpole. Typically, outdoor flags are flown outside of government organizations, businesses, and institutions on in-ground and wall-mount flagpoles, however, some people also buy these flags to display their international pride at home. If you are looking for a wall-mount United Arab Emirates flag set to display outside of your home, our Build Your Own Outdoor International Flag Set program will allow you to choose between premium quality 6ft. poles and brackets to display the United Arab Emirates Flag on your front porch. Outdoor flags can also be displayed indoors on interior walls of your home with screws anchored in the wall to attach to the grommets. 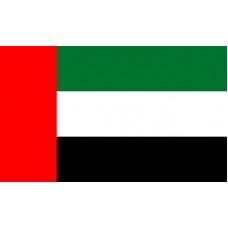 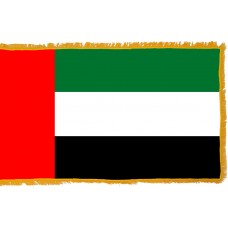 The United Arab Emirates (also referred to as Emirates or UAE) is a country located in the Middle East that consists of seven emirates (state or province) which are, Abu Dhabi, Ajman, Dubai, Fujairah, Ras al-Khaimah, Sharjah, and Umm al-Quwain. It shares borders with Oman, Saudi Arabia, and maritime borders with Qatar and Iran. The capital and second most populated emirate is Abu Dhabi and the most populated emirate is Dubai. Each emirate has its own ruler who is also known as an "emir."

The United Arab Emirates has a very large economy with high-income. The economy in most of the emirates is reliant on oil. It is also very reliant on tourism, with Dubai being the most popular tourist destination in the Middle East. Dubai is home to many famous landmarks such as the "Burj Khalifa" which is the tallest man-made building in the world. It also has the most floors in the world, the highest restaurant and nightclub in the world, and the world’s longest elevator.

The Dubai Mall is another popular attraction and, by area it is the largest mall in the world as well as the most visited building in the world and attracts approximately 80 million tourists a year. The Emirate of Fujairah is home to the "Al-Bidyah Mosque" which is thought to be one of The United Arab Emirates most important historical sites. A major attraction located in the capital of Abu Dhabi is the "Sheikh Zayed Grand Mosque" which is considered to be the most beautiful mosque as its made mainly from marble and features enormous crystal chandeliers, colorful stones embedded on the walls and floors, and has the largest hand-knotted carpet in the world. As well as the mosque, Abu Dhabi is also home to the "Emirates Palace" which was the world's most expensive hotel to build and is a huge a tourist attraction.

We offer free images of the United Arab Emirates Flag in four sizes (small, medium, large, and high resolution). These images are distributed royalty free for both personal and educational use and are ideal for use in projects and on websites. If you choose to use one of our images, attribution is appreciated, but not required.

Add the United Arab Emirates Flag to your Website:

The following html code snippets can be copied and pasted to add an image of the United Arab Emirates Flag to your website: