We carry authentic Latvia Flags in both indoor and outdoor varieties. Our flags are proudly made in the United States from durable nylon and are printed with vibrant long-lasting inks. The Latvia national flag is often displayed at embassies, outside of businesses associated with Latvia, and at the homes of people who take great pride in their Latvian heritage.

Our indoor flags are finished with a pole hem and your choice of with or without golden fringe. Gold fringe is the traditional way to display an indoor flag, however, some people choose without fringe for a simple and clean look that is also less expensive. If you are looking for a complete indoor presentation set, our Build Your Own Indoor International Flag Set program allows you to select a durable nylon indoor Latvia Flag and choose between premium quality poles, bases, and ornaments, and tassel. For indoor applications, most buyers choose a 3ft. x 5ft. flag with an 8ft. pole, however, if you have a low ceiling, you may opt for a 7ft. pole, which is designed to work with drop ceilings. If you are looking for a very substantial international flag display, our 4ft. x 6ft. indoor flags can be paired with a 9ft. pole for our largest indoor display option.

Our outdoor international flags are finished with a canvas header and brass grommets and are offered in four sizes: 2ft. x 3ft., 3ft. x 5ft., 4ft. x 6ft., and 5ft. x 8ft., to fit any sized flagpole. Typically, outdoor flags are flown outside of government organizations, businesses, and institutions on in-ground and wall-mount flagpoles, however, some people also buy these flags to display their international pride at home. If you are looking for a wall-mount Latvia flag set to display outside of your home, our Build Your Own Outdoor International Flag Set program will allow you to choose between premium quality 6ft. poles and brackets to display the Latvia Flag on your front porch. Outdoor flags can also be displayed indoors on interior walls of your home with screws anchored in the wall to attach to the grommets.

In addition to the flags we offer for purchase, we maintain an archive of the audio and lyrics of the Latvia National Anthem, historical information about the Latvia flag, demographic data about Latvia, and free high resolution images of the Latvia flag for use in projects and on websites. 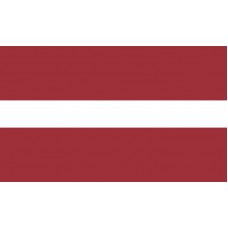 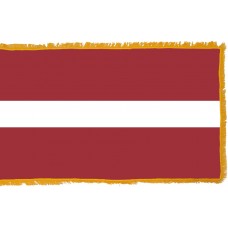 History of the Latvian Flag

The Latvian Flag features 3 stripes in the colors of red, white, and red. The white stripe is half the size of the two red stripes. The Latvia flag was originally adopted on January 20, 1923 and used until 1940 when it was occupied by the Soviet Union but was re-adopted again on February 27th, 1990. According to the "Rhymed Chronicle of Livonia," the Latvia flag actually dates back to 1279 (which makes it one of the oldest national flags).

The Rhymed Chronicle of Livonia documents the history of Latvia and Estonia and refers to the use of the flag during 1279-1280 and states that a Latvia leader was injured during a battle and a white sheet was wrapped around him, with the two edges of it being covered in his blood. The white stripe on the Latvia flag represents the sheet and the two red stripes represent his blood on the sheet. Another interpretation of the colors used is that the red represents the "readiness of the Latvians to give blood from their hearts for freedom and willingness to defend liberty", and the white represents the purity of the Latvians and the peace.

Latvia is a country in Europe (one of the Baltic States) that shares borders with Russia, Belarus, and Sweden. It is thought to be one of the greenest countries due to the fact that the majority of the country is covered with forests and over one fifth of the country's landscape are protected natural areas. These are home to 4 national parks, 42 nature parks, and 260 nature reserves. The forests in Latvia are often referred to as "Green Gold" as Latvia's economy relies heavily on them due to the timber and wood that they produce, making them the most important products in the country. The capital city of Latvia is called Riga.

Lativa is a country that has been invaded and occupied by many different countries and over the 800 years, these countries included, Germany, Denmark, Sweden, Poland, and Russia. It was during the Soviet Union Rule, however, that the country suffered the most after they invaded in 1940 as they killed many Latvians or moved them to another country. During WW II (while it was still under the rule of the Soviet Union), over half of Latvia's Jews (12.5%) were killed by Nazi Germany making this the highest number of any of the European countries. Once the Soviet Union collapsed, Latvia was able to regain its independence in 1991.

Latvia has become a very popular country for tourists, with many historic buildings and monuments, white sand beaches, and forests to visit. The country is home to over 12,000 rivers and 2,000 lakes. The Venta River is home to the "Venta Rapid" which is the widest waterfall that Europe has. The capital city of Riga is home to 800 art nouveau buildings which are a popular destination for tourists and it is also home to the Central Riga Market which is the largest one in Europe.

We offer free images of the Latvia Flag in four sizes (small, medium, large, and high resolution). These images are distributed royalty free for both personal and educational use and are ideal for use in projects and on websites. If you choose to use one of our images, attribution is appreciated, but not required.

The following html code snippets can be copied and pasted to add an image of the Latvia Flag to your website: