We carry authentic Vanuatu Flags in both indoor and outdoor varieties. Our flags are proudly made in the United States from durable nylon and are printed with vibrant long-lasting inks. The Vanuatu national flag is often displayed at embassies, outside of businesses associated with Vanuatu, and at the homes of people who take great pride in their Vanuatu heritage.

Our indoor flags are finished with a pole hem and your choice of with or without golden fringe. Gold fringe is the traditional way to display an indoor flag, however, some people choose without fringe for a simple and clean look that is also less expensive. If you are looking for a complete indoor presentation set, our Build Your Own Indoor International Flag Set program allows you to select a durable nylon indoor Vanuatu Flag and choose between premium quality poles, bases, and ornaments, and tassel. For indoor applications, most buyers choose a 3ft. x 5ft. flag with an 8ft. pole, however, if you have a low ceiling, you may opt for a 7ft. pole, which is designed to work with drop ceilings. If you are looking for a very substantial international flag display, our 4ft. x 6ft. indoor flags can be paired with a 9ft. pole for our largest indoor display option.

Our outdoor international flags are finished with a canvas header and brass grommets and are offered in four sizes: 2ft. x 3ft., 3ft. x 5ft., 4ft. x 6ft., and 5ft. x 8ft., to fit any sized flagpole. Typically, outdoor flags are flown outside of government organizations, businesses, and institutions on in-ground and wall-mount flagpoles, however, some people also buy these flags to display their international pride at home. If you are looking for a wall-mount Vanuatu flag set to display outside of your home, our Build Your Own Outdoor International Flag Set program will allow you to choose between premium quality 6ft. poles and brackets to display the Vanuatu Flag on your front porch. Outdoor flags can also be displayed indoors on interior walls of your home with screws anchored in the wall to attach to the grommets.

In addition to the flags we offer for purchase, we maintain an archive of the audio and lyrics of the Vanuatu National Anthem, historical information about the Vanuatu flag, demographic data about Vanuatu, and free high resolution images of the Vanuatu flag for use in projects and on websites. 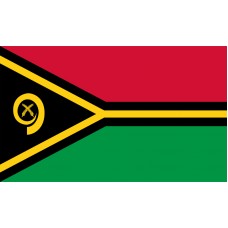 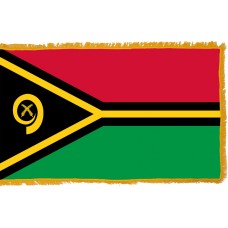 History of the Vanuatu Flag

The Vanuatu flag consists of two horizontal bands in the colors of red and green. On the left-hand side of the flag is a gold horizontal "Y" which has a thick black border and the inside of the "Y" is colored in a black triangle. In the middle of the black triangle is an emblem of a boar's tusk and two "Cycad" leaves (also known as fern leaves). The red color of the Vanuatu flag represents the blood of the wild boars and of the men, the green color represents the richness and agriculture of Vanuatu's land, the black color represents the Melanesian people, the original inhabitants of the island and the gold color represents the sunshine. The boar's tusk is seen as a symbol of hope and prosperity in Vanuatu and is one by the majority of the natives as a pendant and the Cycad leaves represent peace. The Vanuatu flag was adopted on February 18th, 1990.

Vanuatu is an island country in the South Pacific Ocean and is made up of 83 small islands, 65 of which are inhabited. Its neighboring countries are New Caledonia, Solomon Islands, Fiji, and Tuvalu. The main islands of Vanuatu are Espiritu Santo (also the largest island), Malakula, Efate, Erromango, Ambrym, and Tanna. The largest and capital city is called Port Vila, which is located on the island of Efate. The islands were first discovered in 1606 by a Portuguese explorer called Pedro Fernandez de Quiros, who named the islands "La Austrialia del Espiritu Santo" which translates as "The Southern Land of the Holy Spirit" as the explorer thought he had arrived in Australia when he discovered them. Due to this, Europeans did not return to the islands again until 1768 when they were rediscovered by Louis de Bougainville. In 1774, Captain Cook named the islands the "New Hebrides" and they were known as this until they changed the name upon gaining independence. From 1906, the islands were controlled by the British and the French and it was called the "British-French Condominium" which was a special government. Vanuatu gained independence on July 30, 1980.

The economy in Vanuatu is reliant on agriculture, tourism, financial services, and raising cattle. In recent years, tourism is becoming increasingly popular here and the main attraction that tourists visit the country to see is "Mount Yasur" which is one of the most active volcanoes in the world. Another main attraction is the "Millenium Cave" which is approximately 20m wide and 50m high and has a bamboo bridge that takes people from the cave down to the pool. The Blue holes (naturally formed swimming holes) located on the island of Espiritu Santo are also visited frequently and a popular attraction. Vanuatu is renowned for its beautiful beaches with clear waters and white sands, the most popular one being Mele Cascades, which is also considered to be one of the most photogenic beaches in the world.

God has given us this land,
We have great cause for rejoicing
We are strong and we are free in this land
We are all brothers

We work hard on our many islands
God helps us in our work
He is Our Father!

We offer free images of the Vanuatu Flag in four sizes (small, medium, large, and high resolution). These images are distributed royalty free for both personal and educational use and are ideal for use in projects and on websites. If you choose to use one of our images, attribution is appreciated, but not required.

The following html code snippets can be copied and pasted to add an image of the Vanuatu Flag to your website: