We carry authentic Chad Flags in both indoor and outdoor varieties. Our flags are proudly made in the United States from durable nylon and are printed with vibrant long-lasting inks. The Chad national flag is often displayed at embassies, outside of businesses associated with Chad, and at the homes of people who take great pride in their Chad heritage.

Our indoor flags are finished with a pole hem and your choice of with or without golden fringe. Gold fringe is the traditional way to display an indoor flag, however, some people choose without fringe for a simple and clean look that is also less expensive. If you are looking for a complete indoor presentation set, our Build Your Own Indoor International Flag Set program allows you to select a durable nylon indoor Chad Flag and choose between premium quality poles, bases, and ornaments, and tassel. For indoor applications, most buyers choose a 3ft. x 5ft. flag with an 8ft. pole, however, if you have a low ceiling, you may opt for a 7ft. pole, which is designed to work with drop ceilings. If you are looking for a very substantial international flag display, our 4ft. x 6ft. indoor flags can be paired with a 9ft. pole for our largest indoor display option.

Our outdoor international flags are finished with a canvas header and brass grommets and are offered in four sizes: 2ft. x 3ft., 3ft. x 5ft., 4ft. x 6ft., and 5ft. x 8ft., to fit any sized flagpole. Typically, outdoor flags are flown outside of government organizations, businesses, and institutions on in-ground and wall-mount flagpoles, however, some people also buy these flags to display their international pride at home. If you are looking for a wall-mount Chad flag set to display outside of your home, our Build Your Own Outdoor International Flag Set program will allow you to choose between premium quality 6ft. poles and brackets to display the Chad Flag on your front porch. Outdoor flags can also be displayed indoors on interior walls of your home with screws anchored in the wall to attach to the grommets.

In addition to the flags we offer for purchase, we maintain an archive of historical information about the Chad flag, demographic data about Chad, and free high resolution images of the Chad flag for use in projects and on websites. 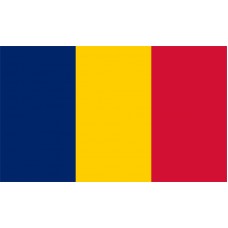 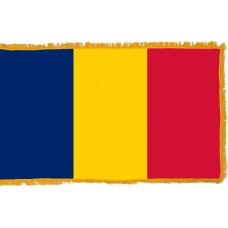 History of the Chad Flag

The flag of Chad features a tricolor design of three equal-sized vertical stripes in the colors, blue, yellow, and red. Those colors are used to represent a fusion of the French tricolor flag (red and blue) and the Pan-African colors (red and yellow). The blue color is also symbolic of hope and strength, the yellow color symbolizes the sun, and the red signifies the blood that was shed in the struggle for independence as well as harmony. The Chad flag, which is almost identical to the Romanian flag, but with a darker shade of blue, was adopted on November 6th, 1959.

In 1891, Chad was invaded by France and in 1899, it was finally conquered and became a French protectorate. Following World War II, in 1946, Chad began to fight against France for their freedom. They fought for many years, but didn't gain freedom until August, 11th 1960. During the years of being a French protectorate, the French flag was flown in the country. Despite gaining independence, Chad struggled and still does with conflicts, mainly between the Muslims and the Christians in the country.

Chad is the largest landlocked country in Africa and it shares borders with Libya, Sudan, Central African Republic, Cameroon, and Nigeria. The Sahara Desert covers at least one third of the country. N'Djamena is the largest and capital city in Chad, with many enchanting landmarks including The Grand Mosque and Cathedral and Avenue Charles De Gaulle.

Chad's name derived from Lake Chad, which is the 17th largest lake in the world and the 2nd largest lake in Africa. It is a very important source of water for Chad and some of the neighboring countries. Since 1963, the lake has shrunk by 95% but it still remains one of the major tourist attractions in the country. Other popular attractions in Chad are the Lakes of Ounianga which feature 18 lakes of various colors, including, red, blue, and green and the Emi Koussi, which is a dormant volcano that is the highest point in Chad and in the Sahara.

Chad is also referred to as the "Dead Heart of Africa" due to its proximity to the deserts and "The Babel Tower," which pays homage to the fact that Chad is home to over 200 ethnic groups and over 100 languages with much cultural diversity. The geography of Chad is quite diverse including beaches, mountains, lakes and deserts. Unfortunately, Chad is also one of the poorest and most corrupt countries in the world; It is estimated that over 147,000 children in Chad that are suffering from malnutrition. The primary industry in the country since 2003 has been crude oil, followed by cotton.

We offer free images of the Chad Flag in four sizes (small, medium, large, and high resolution). These images are distributed royalty free for both personal and educational use and are ideal for use in projects and on websites. If you choose to use one of our images, attribution is appreciated, but not required.

The following html code snippets can be copied and pasted to add an image of the Chad Flag to your website: