We carry authentic Iraq Flags in both indoor and outdoor varieties. Our flags are proudly made in the United States from durable nylon and are printed with vibrant long-lasting inks. The Iraq national flag is often displayed at embassies, outside of businesses associated with Iraq, and at the homes of people who take great pride in their Iraqi heritage.

Our indoor flags are finished with a pole hem and your choice of with or without golden fringe. Gold fringe is the traditional way to display an indoor flag, however, some people choose without fringe for a simple and clean look that is also less expensive. If you are looking for a complete indoor presentation set, our Build Your Own Indoor International Flag Set program allows you to select a durable nylon indoor Iraq Flag and choose between premium quality poles, bases, and ornaments, and tassel. For indoor applications, most buyers choose a 3ft. x 5ft. flag with an 8ft. pole, however, if you have a low ceiling, you may opt for a 7ft. pole, which is designed to work with drop ceilings. If you are looking for a very substantial international flag display, our 4ft. x 6ft. indoor flags can be paired with a 9ft. pole for our largest indoor display option.

Our outdoor international flags are finished with a canvas header and brass grommets and are offered in four sizes: 2ft. x 3ft., 3ft. x 5ft., 4ft. x 6ft., and 5ft. x 8ft., to fit any sized flagpole. Typically, outdoor flags are flown outside of government organizations, businesses, and institutions on in-ground and wall-mount flagpoles, however, some people also buy these flags to display their international pride at home. If you are looking for a wall-mount Iraq flag set to display outside of your home, our Build Your Own Outdoor International Flag Set program will allow you to choose between premium quality 6ft. poles and brackets to display the Iraq Flag on your front porch. Outdoor flags can also be displayed indoors on interior walls of your home with screws anchored in the wall to attach to the grommets.

In addition to the flags we offer for purchase, we maintain an archive of the audio and lyrics of the Iraq National Anthem, historical information about the Iraq flag, demographic data about Iraq, and free high resolution images of the Iraq flag for use in projects and on websites. 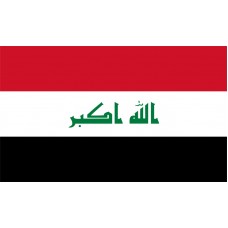 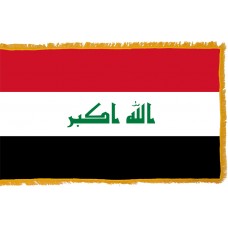 History of the Iraq Flag

The flag of Iraq is a tricolor consisting of red, white and black horizontal sections of equal size. The takbir is featured in the white central section of the flag in green Kufic script. This has been used since July 31st, 1963 with some minor changes to the green symbols.

In 1921, modern Iraq adopted its first flag, "The Kingdom of Iraq." The flag featured black, white, and green horizontal bands and a red triangle inset on the mast side, bearing two seven-pointed white stars, denoting the two Principles in the Kingdom. After the merger of Egypt and Syria in the United Arab Republic in 1958, Iraq and Jordan, which are the two Hashemite Kingdoms, responded by establishing the Arab Federation, an alliance of the two states. The design used to represent this merger was essentially the Jordan Flag without the star, however, this lasted less than six months.

The Hashemite Monarchy was abolished in Iraq following the revolution in July 1958 and a new flag was adopted to represent the new republic. This new flag was a black, white, and green vertical tricolor and featured a a yellow circle surrounded by a red, eight-pointed star located at the center of the flag. The red star was representative of the minority Assyrian people and the ancient heritage of Iraq. The black, white, green, and red, the pan Arab colors, whilst the yellow center of the circle represents the sun. The people in the Kurdish minority region of Iraq are still allowed to fly this version of the flag, but the later versions which were used between 1963 to 2008 are forbidden because of the representation of pan Arabism.

On July 31st, 1963, after the republic was overthrown, a new tricolor flag of red, white and black with three green stars in the middle was implemented. This flag was representative of the hope for a new United Arab Republic which would consisty of Iraq, Egypt and Syria. Syria hoped for the same and also adopted this flag until 1971 when The Hawk of Qureish replaced the green stars. The flag remained the same during Saddam Hussein's Presidency with the meaning of the three stars being altered to signify unity, freedom, and socialism. Saddam Hussein prompted the phrase "God is Great" in Arabic to be added between the stars in what is said to be Saddam's own handwriting on January 13th, 1991.

In 2004 the Iraqi interim US appointed administration adopted a compromise due to an opposition of the abandonment of the flag due to a difference of views. A stylized Kufic script replaced the handwriting on the flag. The modified flag was presented at a handover ceremony on June 28th, 2004.

The current version and design of the flag of Iraq was confirmed on January 22nd, 2008. The three stars were removed, but the red, white, and black horizontal stripes remain. There was an attempt to replace the flag with another design in 2012 as the version was only intended to last for one year but this never came to fruition.

My homeland, My homeland
The youth will not tire, 'till your independence
Or they die
We will drink from death
And will not be to our enemies
Like slaves, Like slaves

The sword and the pen
Not the talk nor the quarrel
Are our symbols, Are our symbols
Our glory and our covenant
And a duty to be faithful
Moves us, moves us

We offer free images of the Iraq Flag in four sizes (small, medium, large, and high resolution). These images are distributed royalty free for both personal and educational use and are ideal for use in projects and on websites. If you choose to use one of our images, attribution is appreciated, but not required.

The following html code snippets can be copied and pasted to add an image of the Iraq Flag to your website: