We carry authentic Lebanon Flags in both indoor and outdoor varieties. Our flags are proudly made in the United States from durable nylon and are printed with vibrant long-lasting inks. The Lebanon national flag is often displayed at embassies, outside of businesses associated with Lebanon, and at the homes of people who take great pride in their Lebanon heritage.

Our indoor flags are finished with a pole hem and your choice of with or without golden fringe. Gold fringe is the traditional way to display an indoor flag, however, some people choose without fringe for a simple and clean look that is also less expensive. If you are looking for a complete indoor presentation set, our Build Your Own Indoor International Flag Set program allows you to select a durable nylon indoor Lebanon Flag and choose between premium quality poles, bases, and ornaments, and tassel. For indoor applications, most buyers choose a 3ft. x 5ft. flag with an 8ft. pole, however, if you have a low ceiling, you may opt for a 7ft. pole, which is designed to work with drop ceilings. If you are looking for a very substantial international flag display, our 4ft. x 6ft. indoor flags can be paired with a 9ft. pole for our largest indoor display option.

Our outdoor international flags are finished with a canvas header and brass grommets and are offered in four sizes: 2ft. x 3ft., 3ft. x 5ft., 4ft. x 6ft., and 5ft. x 8ft., to fit any sized flagpole. Typically, outdoor flags are flown outside of government organizations, businesses, and institutions on in-ground and wall-mount flagpoles, however, some people also buy these flags to display their international pride at home. If you are looking for a wall-mount Lebanon flag set to display outside of your home, our Build Your Own Outdoor International Flag Set program will allow you to choose between premium quality 6ft. poles and brackets to display the Lebanon Flag on your front porch. Outdoor flags can also be displayed indoors on interior walls of your home with screws anchored in the wall to attach to the grommets.

In addition to the flags we offer for purchase, we maintain an archive of the audio and lyrics of the Lebanon National Anthem, historical information about the Lebanon flag, demographic data about Lebanon, and free high resolution images of the Lebanon flag for use in projects and on websites. 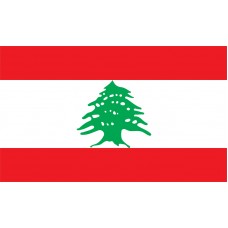 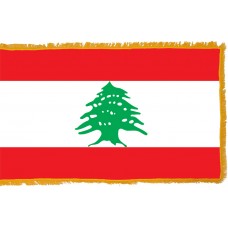 History of the Lebanon Flag

The Lebanon flag has three horizontal bands, in the colors of red, white, and red. The white band is double the size of the two red bands and in the middle of the white band is a green cedar tree. The red colors represent the bloodshed in the struggle for independence against the Ottoman Empire and the French, and the white color represents the snowy mountains of the country as well as peace and purity. The Cedar tree is very symbolic to the country and the natives, representing holiness, eternity, happiness, and hope. There Cedar Tree is mentioned 77 times in the bible, one of them being: "The righteous shall flourish like the palm tree, He shall grow like a Cedar in Lebanon." The Lebanon flag was adopted on December 7th, 1943.

In 1926, Lebanon became a French Protectorate and in 1939, the French tricolor was the official flag of Lebanon. During WW II, it was occupied by both the French and British forces until France declared Lebanon's independence in 1944. In 1946, all the French troops left. The majority of wars and battles that have occurred in Lebanon were religion-based wars.

Following Lebanon's independence, parliament is now divided equally according to religious groups. Lebanon has 18 religious communities and the political system is referred to as "Confessionalism." However, there have still been struggles and battles since its independence due to religion, and between 1975-1990, there was a civil war between the Christians and the Muslims.

Lebanon is referred to as "God's Country on Earth" as it is believed that it was God who planted the first Cedar Tree in Lebanon and it was also here that god was said to have created the miracle of turning water into wine. It is also thought that the word "Bible" is derived from Lebanon's city "Byblos" which is the oldest existing city in the world. The capital city, Beirut is another important city as it has been destroyed and rebuilt 7 times over the years and it has now become the 10th most popular shopping destination in the world.

All of us! For our Country, for our Flag and Glory!
Our valor and our writings are the envy of the ages.
Our mountains and our valleys, they bring forth stalwart men.
And to Perfection we devote our words and labor.

Our Elders and our children, they await our Country's call,
And on the Day of Crisis they are as Lions of the Jungle.
The heart of our East is ever Lebanon,
May God preserve him until the end of time.

The Gems of the East are his land and sea.
Throughout the world his good deeds flow from pole to pole.
And his name is his glory since time began.
The cedars are his pride, his immortality's symbol.

We offer free images of the Lebanon Flag in four sizes (small, medium, large, and high resolution). These images are distributed royalty free for both personal and educational use and are ideal for use in projects and on websites. If you choose to use one of our images, attribution is appreciated, but not required.

The following html code snippets can be copied and pasted to add an image of the Lebanon Flag to your website: