We carry authentic Sweden Flags in both indoor and outdoor varieties. Our flags are proudly made in the United States from durable nylon and are printed with vibrant long-lasting inks. The Sweden national flag is often displayed at embassies, outside of businesses associated with Sweden, and at the homes of people who take great pride in their Swedish heritage.

Our indoor flags are finished with a pole hem and your choice of with or without golden fringe. Gold fringe is the traditional way to display an indoor flag, however, some people choose without fringe for a simple and clean look that is also less expensive. If you are looking for a complete indoor presentation set, our Build Your Own Indoor International Flag Set program allows you to select a durable nylon indoor Sweden Flag and choose between premium quality poles, bases, and ornaments, and tassel. For indoor applications, most buyers choose a 3ft. x 5ft. flag with an 8ft. pole, however, if you have a low ceiling, you may opt for a 7ft. pole, which is designed to work with drop ceilings. If you are looking for a very substantial international flag display, our 4ft. x 6ft. indoor flags can be paired with a 9ft. pole for our largest indoor display option.

Our outdoor international flags are finished with a canvas header and brass grommets and are offered in four sizes: 2ft. x 3ft., 3ft. x 5ft., 4ft. x 6ft., and 5ft. x 8ft., to fit any sized flagpole. Typically, outdoor flags are flown outside of government organizations, businesses, and institutions on in-ground and wall-mount flagpoles, however, some people also buy these flags to display their international pride at home. If you are looking for a wall-mount Sweden flag set to display outside of your home, our Build Your Own Outdoor International Flag Set program will allow you to choose between premium quality 6ft. poles and brackets to display the Sweden Flag on your front porch. Outdoor flags can also be displayed indoors on interior walls of your home with screws anchored in the wall to attach to the grommets.

In addition to the flags we offer for purchase, we maintain an archive of the audio and lyrics of the Sweden National Anthem, historical information about the Sweden flag, demographic data about Sweden, and free high resolution images of the Sweden flag for use in projects and on websites. 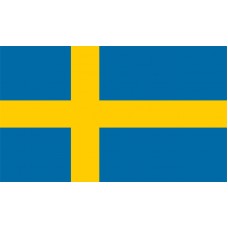 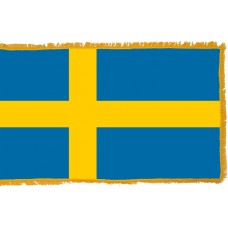 History of the Sweden Flag

The Swedish flag consists of a blue field with a yellow Scandinavian Cross. The vertical part of the cross is more towards the left side of the flag and not in the center. It is thought that the Swedish flag was inspired by the Coat of Arms. The cross on the flag was taken from the Danish flag and the blue and yellow colors have been the traditional colors of Sweden. According to Swedish legend, during the First Swedish Crusade in 1157, King Eric IX saw a golden cross in the sky which he saw as a sign from God and took these colors as the colors of his banner and the colors have remained the Swedish colors since then.

According to other historians, the Swedish flag was blue with a white cross on it until 1420 and the reign of King Gustav I. The first legal description of the Swedish flag that included the colors yellow and blue was made on April 19th, 1562 as "yellow in a cross fashioned on blue."

Sweden is a country that is located in Northern Europe and shares borders with Norway, Finland, and Denmark. Sweden is thought to be the third largest country in Europe, yet the country has the lowest population. The largest and capital city of Sweden is Stockholm. Stockholm is also referred to as the "Venice of the North" as the entire city has been built around water and consists of 12 islands and 42 bridges. It is also considered to be one of the most beautiful cities in the world due to the centuries of history and culture that it contains.

In 1387, Sweden joined with Denmark and Norway and became part of the "Kalmar Union" which was ruled under a single monarch. The union was between 1397-1523. During the union, however, there were plenty of conflicts and battles which resulted in the "Bloodbath of Stockholm" in 1920, where 80 Swedish Nobles were executed at the hands of the Danish King. The bloodbath caused a major rebellion and on June 6th, 1523, Sweden became a separate country and Gustav Vasa was appointed as King. Following their independence, there were many wars and battles fought with Denmark for control of the Baltic Sea, which resulted in Sweden being defeated.

Sweden is the seventh richest country in the world. The main contributor to the economy is export, mainly of timber, hydropower, and iron. Tourism also contributes to the economy and the most popular tourist destination that attracts over one million tourists a year is the "Vasa Museum." The Vasa Museum is home to the Vasa battleship which sank in 1628 on its maiden voyage. The ship was salvaged over 30 years later, in 1961, and is now displayed in the museum. Another main attraction is the "Fairytale Drottningholm Palace" located on the island of Lovo which is the official residence of the Royal family.

Thou ancient, thou free and mountainous North
Thou quiet, thou joyful beauty!
I greet thee, most beautiful land upon earth,
Thy sun, Thy sky and meadows green.

Thou rest upon memories of great olden days,
When honored thy name flew across the world,
I know that thou art and will be as thou were,
Yes, I want to live I want to die in the North

I forever will serve my beloved country,
Faith until death I will swear,
Thy right I will protect with mind and with hand,
thy banner, full of feats, carry high.

Along with God shall I struggle (fight), for home and for hearth,
for Sweden, the dear Fatherland.
I trade thee not, for anything in the world
No, I want to live I want to die in the North.

We offer free images of the Sweden Flag in four sizes (small, medium, large, and high resolution). These images are distributed royalty free for both personal and educational use and are ideal for use in projects and on websites. If you choose to use one of our images, attribution is appreciated, but not required.

The following html code snippets can be copied and pasted to add an image of the Sweden Flag to your website: