We carry authentic Tanzania Flags in both indoor and outdoor varieties. Our flags are proudly made in the United States from durable nylon and are printed with vibrant long-lasting inks. The Tanzania national flag is often displayed at embassies, outside of businesses associated with Tanzania, and at the homes of people who take great pride in their Tanzanian heritage.

Our indoor flags are finished with a pole hem and your choice of with or without golden fringe. Gold fringe is the traditional way to display an indoor flag, however, some people choose without fringe for a simple and clean look that is also less expensive. If you are looking for a complete indoor presentation set, our Build Your Own Indoor International Flag Set program allows you to select a durable nylon indoor Tanzania Flag and choose between premium quality poles, bases, and ornaments, and tassel. For indoor applications, most buyers choose a 3ft. x 5ft. flag with an 8ft. pole, however, if you have a low ceiling, you may opt for a 7ft. pole, which is designed to work with drop ceilings. If you are looking for a very substantial international flag display, our 4ft. x 6ft. indoor flags can be paired with a 9ft. pole for our largest indoor display option.

Our outdoor international flags are finished with a canvas header and brass grommets and are offered in four sizes: 2ft. x 3ft., 3ft. x 5ft., 4ft. x 6ft., and 5ft. x 8ft., to fit any sized flagpole. Typically, outdoor flags are flown outside of government organizations, businesses, and institutions on in-ground and wall-mount flagpoles, however, some people also buy these flags to display their international pride at home. If you are looking for a wall-mount Tanzania flag set to display outside of your home, our Build Your Own Outdoor International Flag Set program will allow you to choose between premium quality 6ft. poles and brackets to display the Tanzania Flag on your front porch. Outdoor flags can also be displayed indoors on interior walls of your home with screws anchored in the wall to attach to the grommets. 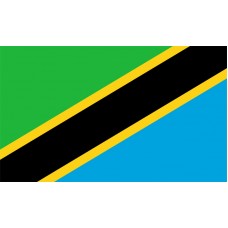 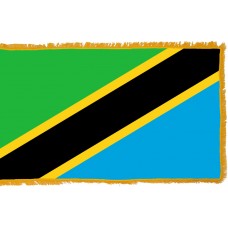 History of the Tanzania Flag

The Tanzania Flag features a black diagonal line with a yellow border beginning from the bottom left hand corner and ending in the top right-hand corner. The upper triangle is in the color green and the lower triangle is in the color blue. The green color represents the country's natural vegetation and "rich agricultural resources" as well as the peace of the country. The blue color represents the Indian Ocean and the many lakes and rivers that Tanzania is home to. The black color represents the native Swahili people and their black skin and is a reminder that all the people are the same and no one should be divided.

Tanzania is a country that is located in Eastern Africa and shares borders with Kenya, Uganda, Rwanda, Burundi, Democratic Republic of Congo, Zambia, Malawi, Mozambique, and the Indian Ocean. The capital city of Tanzania is called Dodoma (it was declared the capital city in 1974). Prior to that, the capital city was Dar es Salaam which is also the largest city. In the late 19th century, Tanzania was conquered by Germany and it was incorporated into German East Africa. It remained a part of this until 1919, when it became a British Mandate. In December 1961, Tanzania (Tanganyika) gained independence from Britain and Zanzibar (also a British protectorate) gained independence in January 1964. Following their independence, the two states merged.

Tanzania is considered to be one of the poorest countries in the world. The main export that the economy is reliant on is the fish from the Lake Victoria. Tourism is also a major factor and contributor to the economy and Tanzania is home to plenty of landmarks and sights. One of Tanzania’s main attractions is Mount Kilimanjaro which is the highest peak in Africa.

It is a free-standing mountain (doesn't belong to a mountain range) which makes it the tallest free-standing mountain in the world. Mount Kilimanjaro is home to three volcanic cones which are, "Kibo," "Mawenzi," and "Shira" which are all dormant volcanos. Tanzania is home to three of the biggest lakes in Africa which include, Lake Victoria (the biggest lake in Africa), Lake Tanganyika (the deepest lake in Africa) and Lake Nyasa. The Serengeti National Park has also become a famous attraction due to the migration of wildebeest that it sees and the 250,000 zebras.

God bless Africa
Bless its leaders
Wisdom, unity and peace
These are our shields
Africa and its people

We offer free images of the Tanzania Flag in four sizes (small, medium, large, and high resolution). These images are distributed royalty free for both personal and educational use and are ideal for use in projects and on websites. If you choose to use one of our images, attribution is appreciated, but not required.

The following html code snippets can be copied and pasted to add an image of the Tanzania Flag to your website: