We carry authentic Dominica Flags in both indoor and outdoor varieties. Our flags are proudly made in the United States from durable nylon and are printed with vibrant long-lasting inks. The Dominica national flag is often displayed at embassies, outside of businesses associated with Dominica, and at the homes of people who take great pride in their Dominica heritage.

Our indoor flags are finished with a pole hem and your choice of with or without golden fringe. Gold fringe is the traditional way to display an indoor flag, however, some people choose without fringe for a simple and clean look that is also less expensive. If you are looking for a complete indoor presentation set, our Build Your Own Indoor International Flag Set program allows you to select a durable nylon indoor Dominica Flag and choose between premium quality poles, bases, and ornaments, and tassel. For indoor applications, most buyers choose a 3ft. x 5ft. flag with an 8ft. pole, however, if you have a low ceiling, you may opt for a 7ft. pole, which is designed to work with drop ceilings. If you are looking for a very substantial international flag display, our 4ft. x 6ft. indoor flags can be paired with a 9ft. pole for our largest indoor display option.

Our outdoor international flags are finished with a canvas header and brass grommets and are offered in four sizes: 2ft. x 3ft., 3ft. x 5ft., 4ft. x 6ft., and 5ft. x 8ft., to fit any sized flagpole. Typically, outdoor flags are flown outside of government organizations, businesses, and institutions on in-ground and wall-mount flagpoles, however, some people also buy these flags to display their international pride at home. If you are looking for a wall-mount Dominica flag set to display outside of your home, our Build Your Own Outdoor International Flag Set program will allow you to choose between premium quality 6ft. poles and brackets to display the Dominica Flag on your front porch. Outdoor flags can also be displayed indoors on interior walls of your home with screws anchored in the wall to attach to the grommets. 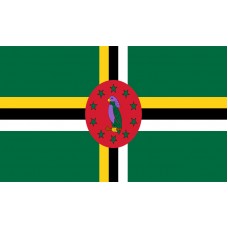 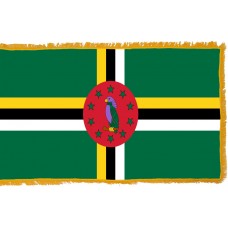 History of the Dominica Flag

The Dominica Flag designed by playwright, Alwin Bully and was adopted on November 3rd, 1978. The flag is green in color with a large yellow,white, and black cross in the center that meets all the edges. In the middle of the cross is a red oval with a Sisserou parrot in the center surrounded by ten small green stars.

The actual cross symbolizes Christianity and the use of three colors in the cross is symbolic of the Trinity. The Dominica flag displays the Sisserou parrot which is the national bird and is an endangered species that is only found in Dominica. The bird has been nicknamed, "The Pride of Dominica." The ten green stars represent the 10 parishes of the country as well as representing the equality of the people, and the red disc is symbolic of social justice.

Dominica is an island country that is located in the Caribbean Sea and is part of the Windward Islands. It is located between Guadeloupe and Martinique. Its capital and largest city is called "Roseau." Dominica is derived from the Latin word for Sunday and the famous explorer, Christopher Columbus named it this as Sunday was the day that the Spanish first discovered the island in 1493.

In 1632, Dominica was claimed by the French but it was not occupied until 1690 when the French established settlements. Dominica was the last of the Caribbean islands to be colonized. In 1727, Dominica became a French Colony. In 1763 following the seven years war, where France was defeated, the British managed to conquer the island from them and in 1805, Dominica became a British Colony. Between 1958-1962, when the Caribbean islands were fighting for independence, for a short period, Dominica was known as a province of the West-Indies Federation but it was still a British colony until it was granted independence in 1978.

Dominica is an island country comprised of more than 70% rainforest. It is home to many beautiful and popular attractions including "Morne Trois Pitons National Park" which is also known as the "miracle of nature." This park is home to volcanoes, canyons, lakes, hot springs, and many wildlife areas.

The "Trafalgar Falls" in the park are one of its most famous sites. The falls consists of two waterfalls known as "Mother" and "Father." It is also home to the "Boiling Lake," which is one of the world's largest thermal lakes. Another popular site to visit in Dominica is the "Champagne Reef" which is very renowned for the diving and snorkelling.

Isle of Beauty, Isle of Splendour

Isle of beauty, isle of splendour,
Isle to all so sweet and fair,
All must surely gaze in wonder
At thy gifts so rich and rare.
Rivers, valleys, hills and mountains,
All these gifts we do extol.
Healthy land, so like all fountains,
Giving cheer that warms the soul.

Dominica, God hath blest thee
With a clime benign and bright,
Pastures green and flowers of beauty
Filling all with pure delight,
And a people strong and healthy,
Full of godly reverent fear.
May we ever seek to praise Thee
For these gifts so rich and rare.

Come ye forward, sons and daughters
Of this gem beyond compare.
Strive for honour, sons and daughters,
Do the right, be firm, be fair.
Toil with hearts and hands and voices.
We must prosper! Sound the call,
In which ev'ryone rejoices,
"All for Each and Each for All."

We offer free images of the Dominica Flag in four sizes (small, medium, large, and high resolution). These images are distributed royalty free for both personal and educational use and are ideal for use in projects and on websites. If you choose to use one of our images, attribution is appreciated, but not required.

The following html code snippets can be copied and pasted to add an image of the Dominica Flag to your website: