We carry authentic San Marino Flags in both indoor and outdoor varieties. Our flags are proudly made in the United States from durable nylon and are printed with vibrant long-lasting inks. The San Marino national flag is often displayed at embassies, outside of businesses associated with San Marino, and at the homes of people who take great pride in their San Marino heritage.

Our indoor flags are finished with a pole hem and your choice of with or without golden fringe. Gold fringe is the traditional way to display an indoor flag, however, some people choose without fringe for a simple and clean look that is also less expensive. If you are looking for a complete indoor presentation set, our Build Your Own Indoor International Flag Set program allows you to select a durable nylon indoor San Marino Flag and choose between premium quality poles, bases, and ornaments, and tassel. For indoor applications, most buyers choose a 3ft. x 5ft. flag with an 8ft. pole, however, if you have a low ceiling, you may opt for a 7ft. pole, which is designed to work with drop ceilings. If you are looking for a very substantial international flag display, our 4ft. x 6ft. indoor flags can be paired with a 9ft. pole for our largest indoor display option.

Our outdoor international flags are finished with a canvas header and brass grommets and are offered in four sizes: 2ft. x 3ft., 3ft. x 5ft., 4ft. x 6ft., and 5ft. x 8ft., to fit any sized flagpole. Typically, outdoor flags are flown outside of government organizations, businesses, and institutions on in-ground and wall-mount flagpoles, however, some people also buy these flags to display their international pride at home. If you are looking for a wall-mount San Marino flag set to display outside of your home, our Build Your Own Outdoor International Flag Set program will allow you to choose between premium quality 6ft. poles and brackets to display the San Marino Flag on your front porch. Outdoor flags can also be displayed indoors on interior walls of your home with screws anchored in the wall to attach to the grommets.

In addition to the flags we offer for purchase, we maintain an archive of historical information about the San Marino flag, demographic data about San Marino, and free high resolution images of the San Marino flag for use in projects and on websites. 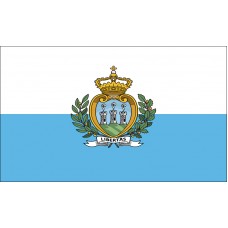 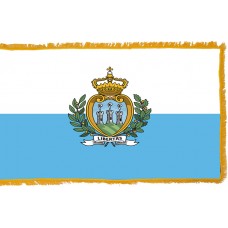 History of the San Marino Flag

The San Marino Flag features two equal horizontal bands in the colors of white and blue. In the center, is the national Coat of Arms. The Coat of Arms is a shield, surrounded by an oak and laurel wreath, that contains three mountains, three towers on top of the mountains, with a crown on top of the shield. At the bottom of the shield is a ribbon which contains the word "LIBERTAS" which means Liberty.

It is thought that San Marino was discovered by a stonemason named Marinus (which is where the country's name originates from). Marinus escaped from the Roman Empire and founded a monastic community where he built a chapel and monastery on Mt. Titano. The state of San Marino grew from the small community that Marinus had created.

The small community, also known as the "Titanic Republic" was founded on September 3rd, 301. In 1631, the independence of San Marino was recognized. During WWI, when Italy declared war on Austria-Hungary, on May 23rd, 1915, San Marino chose to remain neutral, which made the Italians question their motives and suspect that San Marino had Austrian spies. Between 1923-1943, San Marino was ruled by the Sammarinese Fascist Party (PFS) until their collapse during WWII, following Mussolini's collapse. On April 1st, 1944, the PFS regained power until September 1944 when the German forces occupied San Marino for three days (September 17th – September 20th) as they were attacked by Allied forces.

San Marino's economy is reliant on tourism, manufacturing, and the export of ceramics, paint, clothing, and fabric, making San Marino one of the wealthiest nations. Over three million tourists visit the country each year with the main tourist attraction being Mt. Titano and the three towers. La Guaita is the oldest of the towers and the most well-known. It was built during the 11th century and for a short period of time, it was used as a prison. La Cesta tower which was built on the highest point of the mountain was built during the 13th century and La Montale tower, which was built at the lowest point of the mountain, is the only tower that is not open to the public as it is still privately owned.

We offer free images of the San Marino Flag in four sizes (small, medium, large, and high resolution). These images are distributed royalty free for both personal and educational use and are ideal for use in projects and on websites. If you choose to use one of our images, attribution is appreciated, but not required.

The following html code snippets can be copied and pasted to add an image of the San Marino Flag to your website: