We carry authentic Erin Go Bragh Flags in both indoor and outdoor varieties. Our flags are proudly made in the United States from durable nylon and are printed with vibrant long-lasting inks. The Erin Go Bragh national flag is often displayed at the homes of people who take great pride in their Irish heritage.

Our indoor flags are finished with a pole hem and your choice of with or without golden fringe. Gold fringe is the traditional way to display an indoor flag, however, some people choose without fringe for a simple and clean look that is also less expensive. If you are looking for a complete indoor presentation set, our Build Your Own Indoor International Flag Set program allows you to select a durable nylon indoor Erin Go Bragh Flag and choose between premium quality poles, bases, and ornaments, and tassel. For indoor applications, most buyers choose a 3ft. x 5ft. flag with an 8ft. pole, however, if you have a low ceiling, you may opt for a 7ft. pole, which is designed to work with drop ceilings. If you are looking for a very substantial flag display, our 4ft. x 6ft. indoor flags can be paired with a 9ft. pole for our largest indoor display option.

Our outdoor Erin Go Bragh flags are finished with a canvas header and brass grommets and are offered in four sizes: 2ft. x 3ft., 3ft. x 5ft., 4ft. x 6ft., and 5ft. x 8ft., to fit any sized flagpole. Typically, Erin Go Bragh outdoor flags are flown outside of peoples homes. If you are looking for a wall-mount Erin Go Bragh flag set to display outside of your home, our Build Your Own Outdoor International Flag Set program will allow you to choose between premium quality 6ft. poles and brackets to display the Erin Go Bragh Flag on your front porch. Outdoor flags can also be displayed indoors on interior walls of your home with screws anchored in the wall to attach to the grommets. 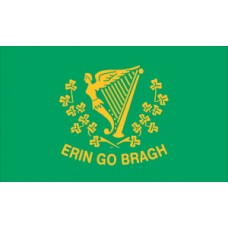 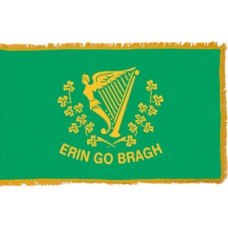 The Erin Go Bragh flag was used from 1846-1848 by the Saint Patrick's Battalion. The flag was designed to represent the importance of Catholicism. The color green was chosen for its association with Saint Patrick who represents Roman Catholicism. The harp is used as it is a national emblem and "Erin Go Bragh" (Eirinn Go Brach in Irish) translates as "Ireland Forever." The Erin Go Bragh flag was used by European immigrants (mainly of Irish descent) of the Saint Patrick's Battalion who were not able to practise their religion freely and were being forced into Protestant Churches.

The Saint Patrick's battalion was a group of approximately 175 immigrants who resided in America due to the famine in Ireland during the 1840s and volunteered to fight on the Mexican side during the Mexican-American war. The Battalion was started by a man named, John Riley and as well as Irish soldiers, there were also German and Italian Roman Catholic soldiers. They all chose to join the Mexican force because of the shared Roman Catholic religion. Some soldiers stated that they were forced into Protestant Churches by the Americans and unable to practise Roman Catholicism and were often beaten due to this. Throughout the war, the Battalion of Saint Patrick, also referred to as "San Patricios" in Spanish, used the Erin Go Bragh Flag.

The Americans saw the Saint Patrick Battalion as traitors of the country, whereas according to the people of Mexico and Ireland, they were heroes. In an account by John Riley of the battalion, he states: "In all my letters, I forgot to tell you under what banner we fought so bravely. It was that glorious Emblem of native rights, that being the banner which should have floated over our native soil many years ago, it was St. Patrick, the Harp of Erin, the Shamrock upon a green field."

The first version of this flag was created in 1642 by Eoghan O Neill to represent the Irish country following the Irish Rebellion in 1641. At this time, the flag was just a plain green flag. In 1642, the harp was added onto the flag and in the 19th century, the phrase Erin Go Brach was added. Before the color green was used, the national color of Ireland was actually blue.

According to legend, Saint Patrick (Patron Saint of Ireland) brought Christianity to Ireland in the 5th Century and converted many Pagans. It is claimed that he converted them by explaining the trinity to them by using clover leaves (shamrock) as an example of "three-in-one." This is now one of the reasons why Green is the national color of Ireland, instead of blue and why green is associated with Roman Catholicism.

We offer free images of the Erin Go Bragh Flag in four sizes (small, medium, large, and high resolution). These images are distributed royalty free for both personal and educational use and are ideal for use in projects and on websites. If you choose to use one of our images, attribution is appreciated, but not required.

Add the Erin Go Bragh Flag to your Website:

The following html code snippets can be copied and pasted to add an image of the Erin Go Bragh Flag to your website: