We carry authentic Austria Flags in both indoor and outdoor varieties. Our flags are proudly made in the United States from durable nylon and are printed with vibrant long-lasting inks. The Austria national flag is often displayed at embassies, outside of businesses associated with Austria, and at the homes of people who take great pride in their Austria heritage.

Our indoor flags are finished with a pole hem and your choice of with or without golden fringe. Gold fringe is the traditional way to display an indoor flag, however, some people choose without fringe for a simple and clean look that is also less expensive. If you are looking for a complete indoor presentation set, our Build Your Own Indoor International Flag Set program allows you to select a durable nylon indoor Austria Flag and choose between premium quality poles, bases, and ornaments, and tassel. For indoor applications, most buyers choose a 3ft. x 5ft. flag with an 8ft. pole, however, if you have a low ceiling, you may opt for a 7ft. pole, which is designed to work with drop ceilings. If you are looking for a very substantial international flag display, our 4ft. x 6ft. indoor flags can be paired with a 9ft. pole for our largest indoor display option.

Our outdoor international flags are finished with a canvas header and brass grommets and are offered in four sizes: 2ft. x 3ft., 3ft. x 5ft., 4ft. x 6ft., and 5ft. x 8ft., to fit any sized flagpole. Typically, outdoor flags are flown outside of government organizations, businesses, and institutions on in-ground and wall-mount flagpoles, however, some people also buy these flags to display their international pride at home. If you are looking for a wall-mount Austria flag set to display outside of your home, our Build Your Own Outdoor International Flag Set program will allow you to choose between premium quality 6ft. poles and brackets to display the Austria Flag on your front porch. Outdoor flags can also be displayed indoors on interior walls of your home with screws anchored in the wall to attach to the grommets.

In addition to the flags we offer for purchase, we maintain an archive of the audio and lyrics of the Austria National Anthem, historical information about the Austria flag, demographic data about Austria, and free high resolution images of the Austria flag for use in projects and on websites. 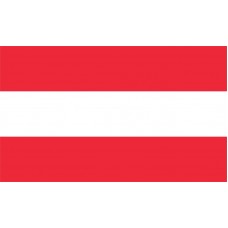 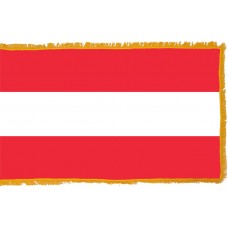 History of the Austrian Flag

The Austrian flag features 3 equal-sized horizontal bands of red, white, and red. According to legend, the flag is said to have been designed by Duke Leopold V of Austria. During the Siege of Acre, in 1191, when Duke Leopold V was in battle, his white coat was drenched with blood. When he proceeded to remove his belt, the clothes underneath remained clean and white, which is when the red-white-red theme was introduced. The red and white colors have been a national emblem of Austria for over 800 years and the colors have been included in all of the nation's flags throughout its history.

The Austrian flag is the 2nd oldest national flag in the world, following only Denmark. Some people state that the Austrian flag is actually older than the Danish flag since even though it was not used until 1230, it was actually designed in 1191, whereas the Denmark flag was introduced and adopted in 1219.

The current flag design was originally used as the country's naval ensign until it was officially adopted as the national flag in 1918. During World War II the flag was banned as Austria was made part of Nazi Germany between 1938-1955. Until Austria became divided during the war and occupied by America, France, Great Britain and the Soviet Union, it was one of the most powerful countries in the world. It became officially independent on October 26th, 1955 when a treaty was signed in Vienna and the national flag was re-adopted.

Austria is a landlocked country that shares borders with Germany, Czech Republic, Switzerland, Liechtenstein, Slovenia, Italy, Hungary and Slovakia. The country is mainly comprised of mountains and is renowned for its beautiful scenery, with the Alps covering 62% of the nation's landscape. Austria is also well known for its historic villages and cities which are home to some of the oldest buildings in the world, including "Haslauer" which is the world's oldest inn and restaurant that is still in business, and the oldest Zoological garden, "TiergartenSchonbrunn," which was created in Vienna, in 1752. Over 700 animal species live here, making it the premier zoo in Europe.

Austria's economy is heavily reliant on tourism, especially of its capital city, Vienna. Vienna has been referred to as the "city of music" since the city has been home to more renowned composers than any other city in the world, including Mozart, Haydn, Brahms, Beethoven and Schubert. The apartments that these musicians once lived are now museums and popular tourist attractions. Another popular historic site in Vienna is the "Zentralfriedhof" which is the cemetery that contains over 2,500,000 tombs amongst which the composers are buried. Vienna has also earned the nickname, "city of dreams" as it was once home to the world's first psychotherapist, Sigmund Freud as well as the renowned mathematician and scientist, Christian Doppler, who introduced the principle, "The Doppler Effect."

Land of the mountains, land on the river (Land der Berge, Land am Strome)

Strongly feuded for, fiercely hard-fought for,
You lie in the middle of the Continent
Like a strong heart,
Since the early days of the ancestors you have
Borne the burden of a high mission,
Much tried Austria,
Much tried Austria.

We offer free images of the Austria Flag in four sizes (small, medium, large, and high resolution). These images are distributed royalty free for both personal and educational use and are ideal for use in projects and on websites. If you choose to use one of our images, attribution is appreciated, but not required.

The following html code snippets can be copied and pasted to add an image of the Austria Flag to your website: