We carry authentic El Salvador Flags in both indoor and outdoor varieties. Our flags are proudly made in the United States from durable nylon and are printed with vibrant long-lasting inks. The El Salvador national flag is often displayed at embassies, outside of businesses associated with El Salvador, and at the homes of people who take great pride in their El Salvador heritage.

Our indoor flags are finished with a pole hem and your choice of with or without golden fringe. Gold fringe is the traditional way to display an indoor flag, however, some people choose without fringe for a simple and clean look that is also less expensive. If you are looking for a complete indoor presentation set, our Build Your Own Indoor International Flag Set program allows you to select a durable nylon indoor El Salvador Flag and choose between premium quality poles, bases, and ornaments, and tassel. For indoor applications, most buyers choose a 3ft. x 5ft. flag with an 8ft. pole, however, if you have a low ceiling, you may opt for a 7ft. pole, which is designed to work with drop ceilings. If you are looking for a very substantial international flag display, our 4ft. x 6ft. indoor flags can be paired with a 9ft. pole for our largest indoor display option.

Our outdoor international flags are finished with a canvas header and brass grommets and are offered in four sizes: 2ft. x 3ft., 3ft. x 5ft., 4ft. x 6ft., and 5ft. x 8ft., to fit any sized flagpole. Typically, outdoor flags are flown outside of government organizations, businesses, and institutions on in-ground and wall-mount flagpoles, however, some people also buy these flags to display their international pride at home. If you are looking for a wall-mount El Salvador flag set to display outside of your home, our Build Your Own Outdoor International Flag Set program will allow you to choose between premium quality 6ft. poles and brackets to display the El Salvador Flag on your front porch. Outdoor flags can also be displayed indoors on interior walls of your home with screws anchored in the wall to attach to the grommets. 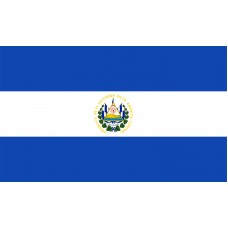 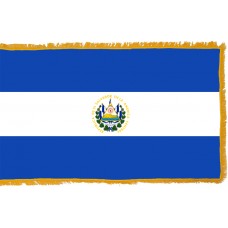 History of the El Salvador Flag

The El Salvador Flag is a striking symbol of the country's place in the world and its values. The flag is comprised of three horizontal bands of equal height. At the top and bottom are bands of cobalt blue. These represent the two seas between which El Salvador sits. The middle band is white, which represents peace. The country's coat of arms is printed centrally on the white band.

Around the coat of arms are the words "Tierra de Volcanes Soberbios." This translates to "land of the superb volcanoes" in Spanish. This motto carries both a sense of El Salvador's physical geography and its colonial history. As a republic in Central America, it sits in a part of the world which has been fought over for hundreds of years, and is yet a land of stunning beauty.

There are two versions of the El Salvador Flag. The first version bears the country's coat of arms and is used in the international community. The second version is flown within the country on public buildings and features the same three colored bands of cobalt blue and white, however, the printing on the white band reads, "Dios Union Libertad" in large bold amber letters. This striking version of the flag states boldly that El Salvador believes in God, unity and liberty.

The country has a history dating back thousands of years, and its people are of native American ethnicities as well as European and African ancestries, which gives the nation a strong sense of diversity.

The blue color of the country's flag is also chosen to symbolize the anil or indigo plants, a flowering variety of the pea family, which El Salvador is famous for. The anil's flowers can be crushed to make indigo blue dye, which became very valuable in the middle ages. The Spanish empire conquered what is now El Salvador and exploited its anil indigo dye by exporting to Europe, America and Asia. This trade in anil dye led to the products being nicknamed, "blue gold." It formed the basis of El Salvador's wealth, before being overtaken by coffee production.

As with other parts of Central and South America, the country's hot, humid climate and friendly soil make it an ideal place to grow coffee beans. This and sugar cane are very important components of El Salvador's economy.

El Salvador also has an extensive range of both active and inactive volcanoes. The country's capital city, San Salvador, sits at the foot of an active stratovolcano, which last erupted in 1917.

Proudly saluting the homeland,
Their sons we can be called
And swear life valliantly
Without rest to its good consecrate

In the supreme word of peace,
El Salvador has always nobly dreamed.
To achieve this has been her eternal endeavor,
To keep it, her greatest glory.
With inviolable faith, she eagerly follows
The way of progress
In order to fulfil her high destiny
And achieve a happy future.
A stern barrier protects her
Against the clash of vile disloyalty,
Ever since the day when her lofty banner,
In letters of blood, wrote "Freedom",
Wrote "Freedom", wrote "Freedom".

Freedom is her dogma and her guide;
A thousand times she has defended it,
And as many times has she repelled
The hateful power of atrocious tyranny.
Her history has been bloody and sad,
Yet at the same time sublime and brilliant,
A source of legitimate glory
And a great lesson in Spartan pride.
Her innate bravery shall not waver:
In every man there is an immortal hero
Who knows how to maintain the level
Of the proverbial valour of old.

All are self-denying and faithful
To the tradition of warlike ardour
With which they have always reaped fame
By saving the motherland's honour.
To respect the rights of others
And base her actions on right and justice
Is for her, without infamous intrigue,
The constant and most firm ambition.
And in following this line she persists,
Dedicating her tenacious efforts
In giving hard battle for battle;
Her happiness is found in peace.

We offer free images of the El Salvador Flag in four sizes (small, medium, large, and high resolution). These images are distributed royalty free for both personal and educational use and are ideal for use in projects and on websites. If you choose to use one of our images, attribution is appreciated, but not required.

The following html code snippets can be copied and pasted to add an image of the El Salvador Flag to your website: