Our indoor flags are finished with a pole hem and your choice of with or without golden fringe. Gold fringe is the traditional way to display an indoor flag, however, some people choose without fringe for a simple and clean look that is also less expensive. If you are looking for a complete indoor presentation set, our Build Your Own Indoor International Flag Set program allows you to select a durable nylon indoor Bosnia-Herzegovina Flag and choose between premium quality poles, bases, and ornaments, and tassel. For indoor applications, most buyers choose a 3ft. x 5ft. flag with an 8ft. pole, however, if you have a low ceiling, you may opt for a 7ft. pole, which is designed to work with drop ceilings. If you are looking for a very substantial international flag display, our 4ft. x 6ft. indoor flags can be paired with a 9ft. pole for our largest indoor display option.

Our outdoor international flags are finished with a canvas header and brass grommets and are offered in four sizes: 2ft. x 3ft., 3ft. x 5ft., 4ft. x 6ft., and 5ft. x 8ft., to fit any sized flagpole. Typically, outdoor flags are flown outside of government organizations, businesses, and institutions on in-ground and wall-mount flagpoles, however, some people also buy these flags to display their international pride at home. If you are looking for a wall-mount Bosnia-Herzegovina flag set to display outside of your home, our Build Your Own Outdoor International Flag Set program will allow you to choose between premium quality 6ft. poles and brackets to display the Bosnia-Herzegovina Flag on your front porch. Outdoor flags can also be displayed indoors on interior walls of your home with screws anchored in the wall to attach to the grommets. 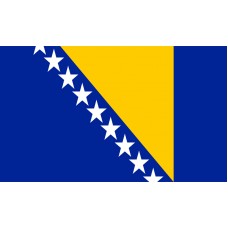 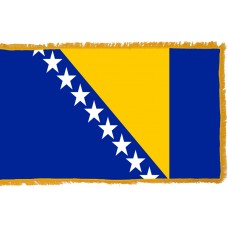 History of the Bosnia-Herzegovina flag

The Bosnia-Herzegovina flag features a blue background with a central yellow right isosceles triangle spanning the height of the flag with the right angle portion located on the upper fly-side of the triangle. Seven white five-pointed stars plus half stars on the top and bottom run parallel to and along the hypotenuse of the triangle. The three colors used on the flag, represent peace, generosity, justice and trust. The three points of the triangle symbolize the groups of people that make up the nation: The Bosniacs, Croats, and Serbs. The white stars stand for Europe and the half stars on the top and bottom signify the stars as continuing infinitely.

Bosnia and Herzegovina is a country in South-Eastern Europe which shares borders with Croatia, Serbia, Montenegro and the Adriatic Sea. The country has a long history of war and struggling for independence. Bosnia and Herzegovina was once part of the Roman Empire, however, when the Roman Empire collapsed it became the Kingdom of Bosnia. In 1463, Bosnia and Herzegovina was overtaken and ruled by the Ottoman Turks. The Ottoman Turks remained in control until the late 1800s when the area became part of Austria-Hungary. Shortly after, following World War I, it became a part of Yugoslavia after World War II when Yugoslavia became a communist country. Following the collapse of communism in 1991, the Bosniaks and Croats sought independence from Yugoslavia, which led to a war from 1991-1995. The bloody war killed over 250,000 people and 2,000,000 people lost their homes and possessions as a result.

On April 5th, 1992, Bosnia and Herzegovina gained independence but the Bosnia-Herzegovina flag that is in use today was not adopted until February 4th, 1998. Between 1992-1998, a different flag was used which featured the coat of arms used by the Kings of Bosnia during the Kotromanic Dynasty. That flag was blue with a white diagonal line in the middle and on each side were 3 gold "fleur de lis." In 1998, it was thought that the six fleur de lys on the flag only represented the Bosniaks and a new flag was created to represent the 3 groups that the nation is comprised of.

Bosnia and Herzegovina is also referred to as the "Heart Shaped Land," due to the shape of the country slightly resembling a heart. The largest city in the country is Sarajevo, which is also the capital city. Bosnia and Herzegovina is very very poor and poverty-stricken country, however, recently the tourism industry has been growing rapidly, which is helping to boost the economy; In fact, the country now has third highest tourism growth rate in the world.

We offer free images of the Bosnia-Herzegovina Flag in four sizes (small, medium, large, and high resolution). These images are distributed royalty free for both personal and educational use and are ideal for use in projects and on websites. If you choose to use one of our images, attribution is appreciated, but not required.

The following html code snippets can be copied and pasted to add an image of the Bosnia-Herzegovina Flag to your website: