We carry authentic Niger Flags in both indoor and outdoor varieties. Our flags are proudly made in the United States from durable nylon and are printed with vibrant long-lasting inks. The Niger national flag is often displayed at embassies, outside of businesses associated with Niger, and at the homes of people who take great pride in their Niger heritage.

Our indoor flags are finished with a pole hem and your choice of with or without golden fringe. Gold fringe is the traditional way to display an indoor flag, however, some people choose without fringe for a simple and clean look that is also less expensive. If you are looking for a complete indoor presentation set, our Build Your Own Indoor International Flag Set program allows you to select a durable nylon indoor Niger Flag and choose between premium quality poles, bases, and ornaments, and tassel. For indoor applications, most buyers choose a 3ft. x 5ft. flag with an 8ft. pole, however, if you have a low ceiling, you may opt for a 7ft. pole, which is designed to work with drop ceilings. If you are looking for a very substantial international flag display, our 4ft. x 6ft. indoor flags can be paired with a 9ft. pole for our largest indoor display option.

Our outdoor international flags are finished with a canvas header and brass grommets and are offered in four sizes: 2ft. x 3ft., 3ft. x 5ft., 4ft. x 6ft., and 5ft. x 8ft., to fit any sized flagpole. Typically, outdoor flags are flown outside of government organizations, businesses, and institutions on in-ground and wall-mount flagpoles, however, some people also buy these flags to display their international pride at home. If you are looking for a wall-mount Niger flag set to display outside of your home, our Build Your Own Outdoor International Flag Set program will allow you to choose between premium quality 6ft. poles and brackets to display the Niger Flag on your front porch. Outdoor flags can also be displayed indoors on interior walls of your home with screws anchored in the wall to attach to the grommets.

In addition to the flags we offer for purchase, we maintain an archive of historical information about the Niger flag, demographic data about Niger, and free high resolution images of the Niger flag for use in projects and on websites. 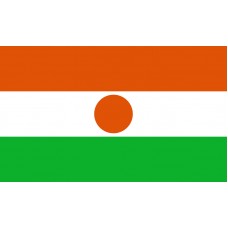 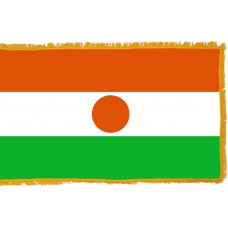 History of the Flag of Niger

The Flag of Niger is a tricolor flag that is composed of three equal sized colored horizontal stripes, orange at the top, white across the middle, and green along the bottom. In the center of the white stripe is an orange roundel. The flag has been in use since 1959. In 1960 Niger officially gained its independence after 60 years of French colonial rule. To this day French continues to be the national language of the country with variations and indigenous languages used by various ethnic groups around the country.

The Niger flag is very similar, and often confused with the Indian national flag, which features the same configuration and color of stripes, only differing with the twenty-four spoke navy blue wheel in the center.

Niger is land locked and bordered by several countries, including Libya, Nigeria, and Algeria. The largest country on the African continent, Niger covers an area of nearly half a million square miles, with over 80% of its land mass made up of the Sahara Desert.

The capital city of Niamey which is located on the banks of the Niger River is home to over one million of the twenty one million residents of Niger. Despite centuries of various occupation, over 80% of the Niger people practice the Islamic faith, with 20% being practicing Christians, a religion brought to the country by the missionaries during the French colonial occupation.

Despite being a mostly religious population, Niger is a secular country, with separation of state and religion protected by the constitution along with religious freedom for its inhabitants.

Niger is classified as a developing country and regularly ranks near the bottom of the table for the United Nations' Human Development Index. In recent years and after considerable political unrest and military coups, Niger in its seventh republic is establishing itself as an exporter of goods which include, oil, gold, coal, and other mineral resources. These exports made up for the drop in the world value of its previous big export, Uranium. In recent years the cost of Uranium has steadily recovered, and it is now contributing to the stability of the economy, an economy that still relies heavily on foreign aid.

Tourism to Niger isn't promoted and the country is still largely off limits to travelers, with warnings against travel in place from various governments around the world. Attacks and the threat to foreigners of being kidnapped is still high. Despite the dangers posed, those who have visited the country have spoken of the friendly and welcoming response they received, and of the fascinating sites they've visited. Points of interest in the country include the deserted medieval villages, dinosaur graveyards, Neolithic rock art, and stunning desert oasis towns.

We offer free images of the Niger Flag in four sizes (small, medium, large, and high resolution). These images are distributed royalty free for both personal and educational use and are ideal for use in projects and on websites. If you choose to use one of our images, attribution is appreciated, but not required.

The following html code snippets can be copied and pasted to add an image of the Niger Flag to your website: