We carry authentic Saudi Arabia Flags in both indoor and outdoor varieties. Our flags are proudly made in the United States from durable nylon and are printed with vibrant long-lasting inks. The Saudi Arabia national flag is often displayed at embassies, outside of businesses associated with Saudi Arabia, and at the homes of people who take great pride in their Saudi Arabian heritage.

Our indoor flags are finished with a pole hem and your choice of with or without golden fringe. Gold fringe is the traditional way to display an indoor flag, however, some people choose without fringe for a simple and clean look that is also less expensive. If you are looking for a complete indoor presentation set, our Build Your Own Indoor International Flag Set program allows you to select a durable nylon indoor Saudi Arabia Flag and choose between premium quality poles, bases, and ornaments, and tassel. For indoor applications, most buyers choose a 3ft. x 5ft. flag with an 8ft. pole, however, if you have a low ceiling, you may opt for a 7ft. pole, which is designed to work with drop ceilings. If you are looking for a very substantial international flag display, our 4ft. x 6ft. indoor flags can be paired with a 9ft. pole for our largest indoor display option.

Our outdoor international flags are finished with a canvas header and brass grommets and are offered in four sizes: 2ft. x 3ft., 3ft. x 5ft., 4ft. x 6ft., and 5ft. x 8ft., to fit any sized flagpole. Typically, outdoor flags are flown outside of government organizations, businesses, and institutions on in-ground and wall-mount flagpoles, however, some people also buy these flags to display their international pride at home. If you are looking for a wall-mount Saudi Arabia flag set to display outside of your home, our Build Your Own Outdoor International Flag Set program will allow you to choose between premium quality 6ft. poles and brackets to display the Saudi Arabia Flag on your front porch. Outdoor flags can also be displayed indoors on interior walls of your home with screws anchored in the wall to attach to the grommets. 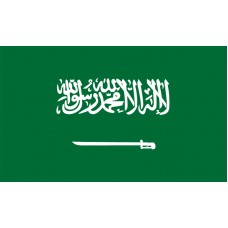 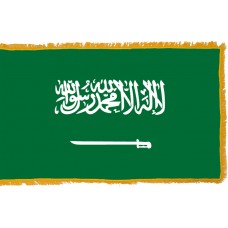 History of the Saudi Arabian Flag

The Saudi Arabia flag features a green field that has a white Arabic inscription in the middle and a sword. The green color is the color of Islam and the sword represents the "strictness in applying justice" and the strength of the military in Saudi Arabia. The inscription on the flag is the "Shahada" which is a declaration of faith and states that "There is no God but God; Muhammad is the messenger of God."

The Saudi Arabia flag differs on both sides so the inscription (Shahada) can be read correctly from right to left. It is one of the only flags that is different on both sides, following Moldova and Paraguay. The present Saudi Arabia flag was adopted on March 15th, 1973. When the "Kingdom of Saudi Arabia" was first formed, the same flag was used, except on the left-hand side of the old one, there was a white vertical band. Saudi Arabia is a country in Western Asia that shares borders with Jordan, Iraq, Kuwait, Qatar, Bahrain, United Arab Emirates, Oman, and Yemen.

The capital city of Saudi Arabia is called Riyadh, which is also the largest city and home to approximately eight million people. Prior to becoming the "Kingdom of Saudi Arabia" in 1932, it consisted of four regions: Hejaz, Najd, Eastern Arabia, and Southern Arabia. All these four states were joined together in 1932 by Ibn Saud (Abdul-Aziz bin Saud) when he captured Riyadh. Since 1932, the country has been an absolute monarchy and still remains one today. Over 95% of the country is made of desert or semi-desert, making it one of the driest countries in the world. It is home to two of the largest deserts which are "Al Nafud" (the Nafud Desert) and Rub Al-Khali (the Empty Quarter). It is also the largest country in the world that does not have any rivers.

Saudi Arabia is considered to be the birthplace of Islam and it is home to two of the holiest shrines in the world. The country is often referred to as "The Land of the Two Holy Mosques" which are in reference to Mecca and Medina. The Great Mosque of Mecca (also known as the Grand Mosque) is the largest mosque in the world and surrounds "Kaaba," which is Islam’s holiest place. The second holiest place, Medina, is home to the Al-Masjid An-Nabawi which translates as "Prophet's Mosque" and is the burial place of the prophet Muhammed.

Saudi Arabia is a country with very strict rules that all citizens must abide by. There are separate rules still today, for men and women. A law was introduced that does not permit women to drive into the city. Also, women are not allowed to get a passport, travel, work, study, or vote without a man’s approval. It is also a country that still applies the death penalty.

Hasten to glory and supremacy,
Glorify the Creator of the heavens!
And raise the green flag
Carrying the emblem of Light,
Repeating: Allah is the greatest,
O my country!
My country, Live as the glory of Muslims!
Long live the King for the flag and the country!

We offer free images of the Saudi Arabia Flag in four sizes (small, medium, large, and high resolution). These images are distributed royalty free for both personal and educational use and are ideal for use in projects and on websites. If you choose to use one of our images, attribution is appreciated, but not required.

The following html code snippets can be copied and pasted to add an image of the Saudi Arabia Flag to your website: