We carry authentic Kyrgyzstan Flags in both indoor and outdoor varieties. Our flags are proudly made in the United States from durable nylon and are printed with vibrant long-lasting inks. The Kyrgyzstan national flag is often displayed at embassies, outside of businesses associated with Kyrgyzstan, and at the homes of people who take great pride in their Kyrgyzstan heritage.

Our indoor flags are finished with a pole hem and your choice of with or without golden fringe. Gold fringe is the traditional way to display an indoor flag, however, some people choose without fringe for a simple and clean look that is also less expensive. If you are looking for a complete indoor presentation set, our Build Your Own Indoor International Flag Set program allows you to select a durable nylon indoor Kyrgyzstan Flag and choose between premium quality poles, bases, and ornaments, and tassel. For indoor applications, most buyers choose a 3ft. x 5ft. flag with an 8ft. pole, however, if you have a low ceiling, you may opt for a 7ft. pole, which is designed to work with drop ceilings. If you are looking for a very substantial international flag display, our 4ft. x 6ft. indoor flags can be paired with a 9ft. pole for our largest indoor display option.

Our outdoor international flags are finished with a canvas header and brass grommets and are offered in four sizes: 2ft. x 3ft., 3ft. x 5ft., 4ft. x 6ft., and 5ft. x 8ft., to fit any sized flagpole. Typically, outdoor flags are flown outside of government organizations, businesses, and institutions on in-ground and wall-mount flagpoles, however, some people also buy these flags to display their international pride at home. If you are looking for a wall-mount Kyrgyzstan flag set to display outside of your home, our Build Your Own Outdoor International Flag Set program will allow you to choose between premium quality 6ft. poles and brackets to display the Kyrgyzstan Flag on your front porch. Outdoor flags can also be displayed indoors on interior walls of your home with screws anchored in the wall to attach to the grommets. 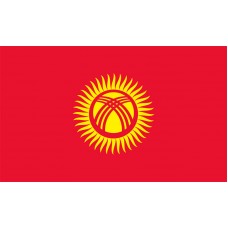 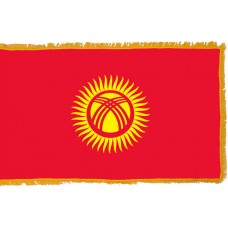 History of the Kyrgyzstan Flag

The Kyrgyzstan flag features a red background with a yellow 40-ray sun in the middle of the flag. In the middle of the sun, there is an illustration of a yurt (also referred to as a Tunduk) which is a type of tent. The color red represents the strength and bravery and the sun represents wealth and peace. The 40 rays of the sun represent the 40 different tribes that were united against the Mongols. The Tunduk represents the family home.

The Kyrgyzstan flag was adopted on March 3rd, 1992, which is seven months after they gained independence on August 31st, 1991.

Kyrgyzstan is a landlocked country in Central Asia that shares borders with China, Kazakhstan, Tajikistan, and Uzbekistan. It is a country that is mainly mountainous with 88 different mountain ranges, resulting in 80% of the country being covered. Its capital city, Bishkek, is considered to be one of the greenest cities in the world.

The second largest city and oldest is called Osh, which is also referred to as the "Capital of the South." The name Kyrgyzstan originates from the Turkic word "Kyrg" which means 40 and refers to the 40 original tribes that formed Kyrgyzstan.

Kyrgyzstan Is one of the poorest countries in Central Asia, following Tajikistan. It is a country that has been under foreign domination many times. In the 13th Century, as a result of the Mongol Conquest across Asia, Kyrgyzstan was under their control for a few hundred years and were ruled by the Kalmyks, Oirats, and Dzungars.

Originally, the Kyrgz people lived in Southern Siberia but began to move Southwards during the Mongel conquests. In 1876, Kyrgyzstan then became part of the Russian Empire which caused many disputes and revolutions and resulted in a lot of the Kyrgz people moving, mainly to Afghanistan or the Pamir Mountains. In 1918, they came under Soviet control until their independence in 1991.

The Kyrgyzstan economy is mainly reliant on agriculture. Tourism is not popular at the moment, despite having monumental places to visit and some beautiful sights and scenery. During the ancient times, "Silk Road" located throughout Kyrgyzstan, was the trade route between China and Europe and the Middle East. It was the center for silk production during the 8th Century. Today, there is a large market in that location called, "The Great Silk Road Bazar."

National Anthem of the Kyrgyz Republic

High mountains, valleys and fields
Are our native, holy land.
Our fathers lived amidst the Ala-Too,
Always saving their motherland.

We are open for freedom for ages.
Friendship and unity are in our hearts.
The land of Kyrgyzstan, our native state,
Shining in the rays of consent.

Dreams of the people came true,
And the flag of liberty is over us.
The heritage of our fathers we will
Pass to our sons for the benefit of people.

We offer free images of the Kyrgyzstan Flag in four sizes (small, medium, large, and high resolution). These images are distributed royalty free for both personal and educational use and are ideal for use in projects and on websites. If you choose to use one of our images, attribution is appreciated, but not required.

The following html code snippets can be copied and pasted to add an image of the Kyrgyzstan Flag to your website: