We carry authentic South Korea Flags in both indoor and outdoor varieties. Our flags are proudly made in the United States from durable nylon and are printed with vibrant long-lasting inks. The South Korea national flag is often displayed at embassies, outside of businesses associated with South Korea, and at the homes of people who take great pride in their South Korean heritage.

Our indoor flags are finished with a pole hem and your choice of with or without golden fringe. Gold fringe is the traditional way to display an indoor flag, however, some people choose without fringe for a simple and clean look that is also less expensive. If you are looking for a complete indoor presentation set, our Build Your Own Indoor International Flag Set program allows you to select a durable nylon indoor South Korea Flag and choose between premium quality poles, bases, and ornaments, and tassel. For indoor applications, most buyers choose a 3ft. x 5ft. flag with an 8ft. pole, however, if you have a low ceiling, you may opt for a 7ft. pole, which is designed to work with drop ceilings. If you are looking for a very substantial international flag display, our 4ft. x 6ft. indoor flags can be paired with a 9ft. pole for our largest indoor display option.

Our outdoor international flags are finished with a canvas header and brass grommets and are offered in four sizes: 2ft. x 3ft., 3ft. x 5ft., 4ft. x 6ft., and 5ft. x 8ft., to fit any sized flagpole. Typically, outdoor flags are flown outside of government organizations, businesses, and institutions on in-ground and wall-mount flagpoles, however, some people also buy these flags to display their international pride at home. If you are looking for a wall-mount South Korea flag set to display outside of your home, our Build Your Own Outdoor International Flag Set program will allow you to choose between premium quality 6ft. poles and brackets to display the South Korea Flag on your front porch. Outdoor flags can also be displayed indoors on interior walls of your home with screws anchored in the wall to attach to the grommets. 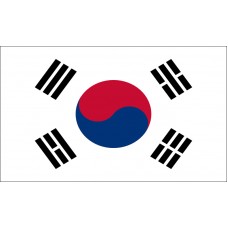 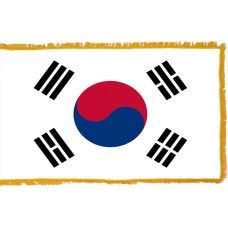 History of the South Korean Flag

The South Korea flag features a white field with a red and blue Yin-Yang in the center, which is also referred to as a "Taegot," (the red color at the top and the blue at the bottom), and four black "Trigrams" surrounding the Yin-Yang. A trigram is a group of three units which are represented by symbols, and in this case, the symbols are long and short black bars. The four groups of trigrams on the flag, are referred to as "Kwae." The Yin-Yang represents the balance in the universe and the Trigrams represent the movement and harmony of the country. The red color of the Yin-Yang represents the "positive cosmic forces" and the blue color of the Yin-Yang represents "the opposing negative cosmic forces." The broken bars of the trigram represent the Yin and the unbroken bars represent the Yang. The four Kwae are symbolic of heaven, earth, water, and fire. The white color of the South Korea flag represents the peace and purity of the country. The South Korea flag is also referred to as the "Taegukgi" which translates as "Supreme National Flag" and it was declared the official flag on October 15th, 1949.

South Korea is a country in East Asia that shares borders with North Korea, East Sea, East China Sea, and the Yellow Sea. Its largest and capital city is called Seoul and is home to ten million people and is the second largest city in the world, following Tokyo. Korea is a country that had over two thousand years independence until it was taken over by the Japanese in 1910 and became a colony. In 1945, during WWII, the Japanese surrendered to the Allied Powers on August 15th, and, as a result, the United States of America and the Soviet Union each owned a portion of Korea. South Korea was occupied by the Americans, under the rule of anti-communist Syngman Rhee, and the North was lead by Kim II-Sung who was positioned by dictator Joseph Stalin. South Korea became the "Republic of Korea" on August 15th, 1948 and North Korea was known as the "Democratic People's Republic of Korea." Both governments were trying to take control and claim the whole of the Korean peninsula which caused a lot of tension and conflict and led to the Korean War from 1950-1953. The Korean War resulted in South Korea and North Korea separated by the Korean Demilitarized Zone (a strip of land going across the Korea peninsula to divide the two areas).

South Korea has one of the strongest economies in Eastern Asia, with the main contributions to the economy being electronics, telecommunications, and steel. Tourism also plays a major role in the economy and South Korea is now the 20th most visited country in the world and the 6th most visited in all of Asia. The main tourist destination is the capital city of Seoul which is home to the popular "Seorak San National Park." Another main tourist attraction is the "Bukhansan National Park," which means "Mountains North of the Han River."

The Song of Love for the Country/The Patriotic Song (Aegukga)

Until that day when
the waters of the Eastern Sea run dry
and Mt. Baekdu is worn away,
God protect and preserve our nation.

As the pine atop the near mountain stands firm,
unchanged through wind and frost,
as if wrapped in armour,
so shall our resilient spirit.

The Autumn sky is void and vast,
high and cloudless;
the bright moon is our heart,
undivided and true.

With this spirit and this mind,
give all loyalty,
in suffering or in joy,
to the love of country.

We offer free images of the South Korea Flag in four sizes (small, medium, large, and high resolution). These images are distributed royalty free for both personal and educational use and are ideal for use in projects and on websites. If you choose to use one of our images, attribution is appreciated, but not required.

The following html code snippets can be copied and pasted to add an image of the South Korea Flag to your website: