We carry authentic Libya Flags in both indoor and outdoor varieties. Our flags are proudly made in the United States from durable nylon and are printed with vibrant long-lasting inks. The Libya national flag is often displayed at embassies, outside of businesses associated with Libya, and at the homes of people who take great pride in their Libyan heritage.

Our indoor flags are finished with a pole hem and your choice of with or without golden fringe. Gold fringe is the traditional way to display an indoor flag, however, some people choose without fringe for a simple and clean look that is also less expensive. If you are looking for a complete indoor presentation set, our Build Your Own Indoor International Flag Set program allows you to select a durable nylon indoor Libya Flag and choose between premium quality poles, bases, and ornaments, and tassel. For indoor applications, most buyers choose a 3ft. x 5ft. flag with an 8ft. pole, however, if you have a low ceiling, you may opt for a 7ft. pole, which is designed to work with drop ceilings. If you are looking for a very substantial international flag display, our 4ft. x 6ft. indoor flags can be paired with a 9ft. pole for our largest indoor display option.

Our outdoor international flags are finished with a canvas header and brass grommets and are offered in four sizes: 2ft. x 3ft., 3ft. x 5ft., 4ft. x 6ft., and 5ft. x 8ft., to fit any sized flagpole. Typically, outdoor flags are flown outside of government organizations, businesses, and institutions on in-ground and wall-mount flagpoles, however, some people also buy these flags to display their international pride at home. If you are looking for a wall-mount Libya flag set to display outside of your home, our Build Your Own Outdoor International Flag Set program will allow you to choose between premium quality 6ft. poles and brackets to display the Libya Flag on your front porch. Outdoor flags can also be displayed indoors on interior walls of your home with screws anchored in the wall to attach to the grommets.

In addition to the flags we offer for purchase, we maintain an archive of historical information about the Libya flag, demographic data about Libya, and free high resolution images of the Libya flag for use in projects and on websites. 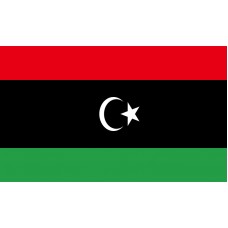 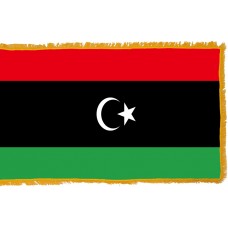 History of the Libyan Flag

Libya is located in North Africa and shares borders with Egypt, Chad, Niger, Algeria, Tunisia, and the Mediterranean Sea. The capital of Libya is Tripoli. Libya used to be made up of three regions, which were, Fezzan, Cyrenaica, and Tripolitania. During the Italian-Turkish war in 1911-1912, Italy captured Tripolitania and Cyrenaica. They captured the cities in order to set up an Italian colony as the area used to be part of the Roman Empire. Following their victory, the Italians began to move to Libya to set up businesses and farms in order to supply food to Italy and they claimed and forcefully took some land in Cyrenaica. During these battles, over 70,000 people lost their lives. In 1942, during WWII, the British managed to capture Tripolitania and following the war the other regions were also captured and were then ruled by France and Britain.

On December 24th, 1951, the United Nations declared Libya an independent country, The United Kingdom of Libya, and the three separated regions, were united and ruled by King Idris. Following the unity and Libya becoming an independent nation, it was faced with many problems, such as poverty, no doctors, pharmacists, or engineers as well as many other problems. On the morning of the September 1st, 1969, during a coup d'etat (a type of revolution), a group of officers took over the Libyan government.

The chief of this group/army was Colonel Muammar Al-Gaddafi, who then proceeded to becoming President and ruled Libya from 1969-2011 until his death.

During his ruling, the name of the country changed to "Great Socialist People's Libyan Arab Jamahiriya." The national flag was changed three times during his ruling (one of the flags was just plain green making it the only country in the world to have a plain flag) and he was a dictator who destroyed the country, banned free speech, and ruined a lot of the cultural heritage of the country. He supported the revolutions and terrorist activities, such as bombings.

Libya is a country that is full of history and bloody, tragic wars. Despite the battles that have been fought here and the destabilization of the country by their leader, Libya still remains very beautiful with plenty of unique and historic sites to see. Tripoli is referred to as the "mermaid of the Mediterranean" due to its clear, turquoise ocean and the whitewashed buildings. That is just one of the many various attractions that Libya is home to.

We offer free images of the Libya Flag in four sizes (small, medium, large, and high resolution). These images are distributed royalty free for both personal and educational use and are ideal for use in projects and on websites. If you choose to use one of our images, attribution is appreciated, but not required.

The following html code snippets can be copied and pasted to add an image of the Libya Flag to your website: