We carry authentic Bolivia Flags in both indoor and outdoor varieties. Our flags are proudly made in the United States from durable nylon and are printed with vibrant long-lasting inks. The Bolivia national flag is often displayed at embassies, outside of businesses associated with Bolivia, and at the homes of people who take great pride in their Bolivian heritage.

Our indoor flags are finished with a pole hem and your choice of with or without golden fringe. Gold fringe is the traditional way to display an indoor flag, however, some people choose without fringe for a simple and clean look that is also less expensive. If you are looking for a complete indoor presentation set, our Build Your Own Indoor International Flag Set program allows you to select a durable nylon indoor Bolivia Flag and choose between premium quality poles, bases, and ornaments, and tassel. For indoor applications, most buyers choose a 3ft. x 5ft. flag with an 8ft. pole, however, if you have a low ceiling, you may opt for a 7ft. pole, which is designed to work with drop ceilings. If you are looking for a very substantial international flag display, our 4ft. x 6ft. indoor flags can be paired with a 9ft. pole for our largest indoor display option.

Our outdoor international flags are finished with a canvas header and brass grommets and are offered in four sizes: 2ft. x 3ft., 3ft. x 5ft., 4ft. x 6ft., and 5ft. x 8ft., to fit any sized flagpole. Typically, outdoor flags are flown outside of government organizations, businesses, and institutions on in-ground and wall-mount flagpoles, however, some people also buy these flags to display their international pride at home. If you are looking for a wall-mount Bolivia flag set to display outside of your home, our Build Your Own Outdoor International Flag Set program will allow you to choose between premium quality 6ft. poles and brackets to display the Bolivia Flag on your front porch. Outdoor flags can also be displayed indoors on interior walls of your home with screws anchored in the wall to attach to the grommets.

In addition to the flags we offer for purchase, we maintain an archive of the audio and lyrics of the Bolivia National Anthem, historical information about the Bolivia flag, demographic data about Bolivia, and free high resolution images of the Bolivia flag for use in projects and on websites. 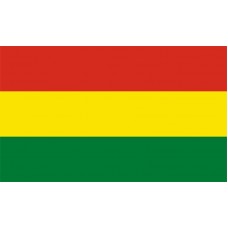 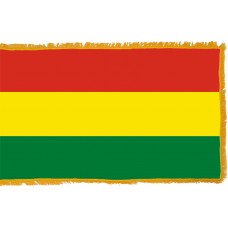 History of the Bolivian Flag

The Bolivian Flag features a design comprised of three equal-sized horizontal stripes of red, yellow, and green. On one variant of the flag, the coat of arms is featured prominently in the center of the yellow stripe, while other times, a flag without the coat of arms, and just the three stripes is used. The red color of the flag symbolizes the soldiers of the country who fought for independence and the accompanying bloodshed, the yellow represents the country's wealth, and the green is symbolic of Bolivia's natural areas and cultivation.

Bolivia Gained its independence from Spain in 1825, however, has utilized several national flag designs over the course of its history, with the current flag of Bolivia being adopted in 1851. The first national flag after gaining independence was red and green with a gold star in the middle encircled by a green wreath. One year later, the government changed this flag to a yellow, red, and green flag with the coat of arms in the center but in 1851, it was changed again by the president at the time as he felt that the colors on the flag should imitate the order of the colors on Bolivia's two national flowers, which are the "Kantuta" and the "Patuju."

The coat of arms represented in the center of the flag is an important symbol of the people of Bolivia. In the center of the coat of arms is a circle featuring Bolivia's Mount Potosi and an alpaca standing next to a tree and wheat. These symbols signify the country's wealth and abundance of natural resources. At one time, Mount Potosi was the most effective and successful mining operation in the world. Behind the circle, two crossed canons represent the struggle and fight for Bolivian independence, an axe and phrygian signify freedom, and ten stars at the bottom symbolize the nine departments of Bolivia (Beni, Santa Cruz, Chuquisaca, Cochabamba, La Paz, Oruro, Pando, Potosi and Tarija) as well as the old province, Litoral. The branches surrounding the circle symbolize peace. An Andean condor, a South American bird found in the Andean mountains, sits on top.

In addition to the tricolor national flag, Bolivia has a second national flag which is, "The Wiphala," a muti-colored, checkered flag. "The Wiphala" represents the native people of the Andes and as of 2009, the Bolivian government recognizes this flag as the country's second official national flag and requires "The Wiphala" to be flown next to the Bolivian Flag. This controversial decision upset many Bolivian natives who did not want to recognize the Andean culture in this way.

We offer free images of the Bolivia Flag in four sizes (small, medium, large, and high resolution). These images are distributed royalty free for both personal and educational use and are ideal for use in projects and on websites. If you choose to use one of our images, attribution is appreciated, but not required.

The following html code snippets can be copied and pasted to add an image of the Bolivia Flag to your website: