We carry authentic Brazil Flags in both indoor and outdoor varieties. Our flags are proudly made in the United States from durable nylon and are printed with vibrant long-lasting inks. The Brazil national flag is often displayed at embassies, outside of businesses associated with Brazil, and at the homes of people who take great pride in their Brazilian heritage.

Our indoor flags are finished with a pole hem and your choice of with or without golden fringe. Gold fringe is the traditional way to display an indoor flag, however, some people choose without fringe for a simple and clean look that is also less expensive. If you are looking for a complete indoor presentation set, our Build Your Own Indoor International Flag Set program allows you to select a durable nylon indoor Brazil Flag and choose between premium quality poles, bases, and ornaments, and tassel. For indoor applications, most buyers choose a 3ft. x 5ft. flag with an 8ft. pole, however, if you have a low ceiling, you may opt for a 7ft. pole, which is designed to work with drop ceilings. If you are looking for a very substantial international flag display, our 4ft. x 6ft. indoor flags can be paired with a 9ft. pole for our largest indoor display option.

Our outdoor international flags are finished with a canvas header and brass grommets and are offered in four sizes: 2ft. x 3ft., 3ft. x 5ft., 4ft. x 6ft., and 5ft. x 8ft., to fit any sized flagpole. Typically, outdoor flags are flown outside of government organizations, businesses, and institutions on in-ground and wall-mount flagpoles, however, some people also buy these flags to display their international pride at home. If you are looking for a wall-mount Brazil flag set to display outside of your home, our Build Your Own Outdoor International Flag Set program will allow you to choose between premium quality 6ft. poles and brackets to display the Brazil Flag on your front porch. Outdoor flags can also be displayed indoors on interior walls of your home with screws anchored in the wall to attach to the grommets.

In addition to the flags we offer for purchase, we maintain an archive of the audio and lyrics of the Brazil National Anthem, historical information about the Brazil flag, demographic data about Brazil, and free high resolution images of the Brazil flag for use in projects and on websites. 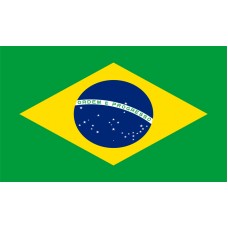 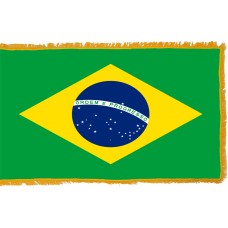 History of the Brazilian Flag

The Brazilian Flag features a green background with a centrally featured large yellow diamond. Upon the center of the diamond is a blue globe that contains 27 white, 5-pointed stars and a band that reads, "ORDEM E PROGRESSO," which translates to, "Order and Progress." The current Flag of Brazil was officially adopted on the November 15th, 1989.

The dark green color used on the Brazilian Flag represents the agriculture, fields and forests in the country, the yellow diamond is symbolic of the wealth from gold as Brazil provided the majority of the world's gold in the 18th century, following its discovery in 1695. The stars represent the sequence of the stars that were seen on November 15th, 1989 from Rio De Janeiro, the same day the country transformed from an Empire into a Republic. The flag is sometimes referred to as "Auriverde," which translates to, "Golden-Green."

The flag has been slightly modified over the years; Originally, there were only 21 stars, used to symbolize the 21 states, however, the larger states were gradually divided into smaller states and extra stars were added to the flag. The last time the flag was modified was on May 11th, 1992, when an extra 4 stars were added.

In 1500, Brazil was claimed by Portugal who maintained control of the country until Brazil gained independence on September 7th, 1822. From 1822-1989, Brazil was ruled under by Brazilian Empires and the flag was changed frequently. The flag used today is derived from the last flag used during the Imperial rule.

Brazil is the largest country in South America and the 5th largest country in the world by land mass. The capital city is Brasilia, despite the fact that Rio De Janeiro was the capital city of the country until 1961. Brazil is home to both the Amazon Rainforest, which is the largest rainforest in the world, and the Amazon River, which is the second longest river in the world, making the country a popular destination for tourists hoping to experience the natural beauty of these sites in person. Tourists also visit Brazil to experience the city of Rio De Janeiro, which is home to many beaches and fantastic sights, as well as its famous landmark, "Christ the Redeemer Statue."

Many plan their visit to Brazil during the time of the carnival in Rio De Janeiro, which has been described as the "world's largest party." In 2017, approximately 1,000,000 tourists visited the country for the carnival, which begins on the Friday afternoon 51 days prior to Easter and ends on Ash Wednesday. During this carnival, there are approximately 2,000,000 people on the streets, the majority of whom are dressed in very elaborate costumes with thousands of dancers and floats parading the streets.

The placid banks of Ipiranga heard
the resounding cry of a heroic people
and in shining rays, the sun of liberty
shone in our homeland's skies at this very moment.

If the assurance of this equality
we achieved by our mighty arms,
in thy bosom, O freedom,
our chest shall defy death itself!

Brazil, an intense dream, a vivid ray
of love and hope descends to earth
if in thy lovely, smiling and clear skies
the image of the (Southern) Cross shines resplendently.

Giant by thine own nature,
thou art beautiful, strong and intrepid colossus,
and thy future mirrors thy greatness.

Beloved Land
amongst a thousand others
art thou, Brazil,
O beloved homeland!

To the sons of this land
thou art a gentle mother,
beloved homeland, Brazil!

Eternally laid on a splendid cradle,
by the sound of the sea and the light of the deep sky,
thou shinest, O Brazil, garland of America,
illuminated by the sun of the New World!

Than the most elegant land abroad,
thy smiling, pretty prairies have more flowers
"Our meadows have more life",
"our life" in thy bosom "more love".

Brazil, of eternal love be the symbol
the star-spangled banner thou showest forth
and proclaim the laurel-green of thy pennant
'Peace in the future and glory in the past.'

But if raises from Justice the strong gavel,
thou wilt see that a son of thine flees not from battle,
nor does he who loves thee fear death itself.

Beloved Land,
amongst a thousand others
art thou, Brazil,
O beloved homeland!

To the sons of this land
thou art a gentle mother,
beloved homeland,
Brazil!

We offer free images of the Brazil Flag in four sizes (small, medium, large, and high resolution). These images are distributed royalty free for both personal and educational use and are ideal for use in projects and on websites. If you choose to use one of our images, attribution is appreciated, but not required.

The following html code snippets can be copied and pasted to add an image of the Brazil Flag to your website: