We carry authentic Greece Flags in both indoor and outdoor varieties. Our flags are proudly made in the United States from durable nylon and are printed with vibrant long-lasting inks. The Greece national flag is often displayed at embassies, outside of businesses associated with Greece, and at the homes of people who take great pride in their Greek heritage.

Our indoor flags are finished with a pole hem and your choice of with or without golden fringe. Gold fringe is the traditional way to display an indoor flag, however, some people choose without fringe for a simple and clean look that is also less expensive. If you are looking for a complete indoor presentation set, our Build Your Own Indoor International Flag Set program allows you to select a durable nylon indoor Greece Flag and choose between premium quality poles, bases, and ornaments, and tassel. For indoor applications, most buyers choose a 3ft. x 5ft. flag with an 8ft. pole, however, if you have a low ceiling, you may opt for a 7ft. pole, which is designed to work with drop ceilings. If you are looking for a very substantial international flag display, our 4ft. x 6ft. indoor flags can be paired with a 9ft. pole for our largest indoor display option.

Our outdoor international flags are finished with a canvas header and brass grommets and are offered in four sizes: 2ft. x 3ft., 3ft. x 5ft., 4ft. x 6ft., and 5ft. x 8ft., to fit any sized flagpole. Typically, outdoor flags are flown outside of government organizations, businesses, and institutions on in-ground and wall-mount flagpoles, however, some people also buy these flags to display their international pride at home. If you are looking for a wall-mount Greece flag set to display outside of your home, our Build Your Own Outdoor International Flag Set program will allow you to choose between premium quality 6ft. poles and brackets to display the Greece Flag on your front porch. Outdoor flags can also be displayed indoors on interior walls of your home with screws anchored in the wall to attach to the grommets.

In addition to the flags we offer for purchase, we maintain an archive of the audio and lyrics of the Greece National Anthem, historical information about the Greece flag, demographic data about Greece, and free high resolution images of the Greece flag for use in projects and on websites. 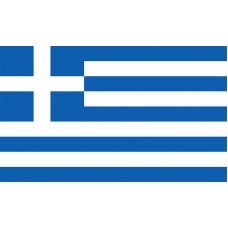 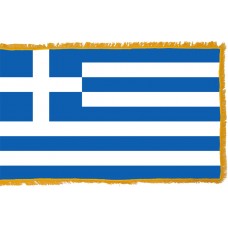 History of the Greek Flag

The Greek Flag consists of nine horizontal blue and white bands and features a blue field with a white cross in the top left corner of the flag. The white cross in the corner symbolizes the primary religion in Greece, Greek Orthodox. The color white represents the clouds and the crest of the waves in the sea. The blue color is symbolic of the sky and the seas that surround Greece. The nine stripes represent the nine syllables of the Greek phrase that translates as "Freedom or Death." During the Hellenic Revolution and the battle for independence these words were shouted out by the fighters.

The blue stripes represent the Greek word for "freedom" as there are 5 blue lines and the Greek word has five syllables. It is also thought that the colors blue and white are used on the Greek flag as they were the colors of the uniform that the soldiers who fought in battle wore. Another myth or superstition according to the Greeks is that the color blue wards off all evil. The Greek flag is known as the "Galanolefki" which translates as "blue and white" and was adopted on March 15th, 1822.

Greece is a country in Southeast Europe that shares borders with, Albania, Republic of Macedonia, Bulgaria and Turkey. Its capital city is called Athens. Greece consists of over 2000 islands, only 170 of those islands are inhabited. The biggest Greek island is Crete. Greece was ruled by different countries and empires for over 2,000 years, which include the Romans during the 2nd Century and Turkey for 400 years. Greece is one of the oldest nations in Europe and the Greek language is the oldest still in use today and a lot of the English language is derived from Greek. Greece is renowned for its mathematicians and philosophers and a lot of mathematical concepts and ideas used today originated from the Greeks.

Greece is one of the most popular countries visited by tourists, with over 16.5 million tourists a year and is home to more museums (archaeological) than any other country in the world. The most popular tourist attraction in Greece is the Famous Temple, "The Parthenon." This structure was built over 2500 years ago and took 15 years to complete. It sits on the Acropolis and is home to many colorful sculptures and a gold and ivory statue of the Goddess, Athena. The most popular location in Greece for tourists, is the Greek island of "Rhodes." Rhodes is home to one of the seven wonders of the world, "The Colossus of Rhodes." The majority of the time, people who visit Greece once always return as there are so many beautiful islands to visit that are all so unique and full of history, as well as home to many stunning, sandy beaches.

I know it's you from the edge
of the sword, the terrible one
I recognize you from the look
which with hardness surveys the land

drawn from the bones
of the Greeks, the sacred ones
and, valiant as first
hail, o hail, Liberty!

We offer free images of the Greece Flag in four sizes (small, medium, large, and high resolution). These images are distributed royalty free for both personal and educational use and are ideal for use in projects and on websites. If you choose to use one of our images, attribution is appreciated, but not required.

The following html code snippets can be copied and pasted to add an image of the Greece Flag to your website: