We carry authentic Malawi Flags in both indoor and outdoor varieties. Our flags are proudly made in the United States from durable nylon and are printed with vibrant long-lasting inks. The Malawi national flag is often displayed at embassies, outside of businesses associated with Malawi, and at the homes of people who take great pride in their Malawi heritage.

Our indoor flags are finished with a pole hem and your choice of with or without golden fringe. Gold fringe is the traditional way to display an indoor flag, however, some people choose without fringe for a simple and clean look that is also less expensive. If you are looking for a complete indoor presentation set, our Build Your Own Indoor International Flag Set program allows you to select a durable nylon indoor Malawi Flag and choose between premium quality poles, bases, and ornaments, and tassel. For indoor applications, most buyers choose a 3ft. x 5ft. flag with an 8ft. pole, however, if you have a low ceiling, you may opt for a 7ft. pole, which is designed to work with drop ceilings. If you are looking for a very substantial international flag display, our 4ft. x 6ft. indoor flags can be paired with a 9ft. pole for our largest indoor display option.

Our outdoor international flags are finished with a canvas header and brass grommets and are offered in four sizes: 2ft. x 3ft., 3ft. x 5ft., 4ft. x 6ft., and 5ft. x 8ft., to fit any sized flagpole. Typically, outdoor flags are flown outside of government organizations, businesses, and institutions on in-ground and wall-mount flagpoles, however, some people also buy these flags to display their international pride at home. If you are looking for a wall-mount Malawi flag set to display outside of your home, our Build Your Own Outdoor International Flag Set program will allow you to choose between premium quality 6ft. poles and brackets to display the Malawi Flag on your front porch. Outdoor flags can also be displayed indoors on interior walls of your home with screws anchored in the wall to attach to the grommets.

In addition to the flags we offer for purchase, we maintain an archive of the audio and lyrics of the Malawi National Anthem, historical information about the Malawi flag, demographic data about Malawi, and free high resolution images of the Malawi flag for use in projects and on websites. 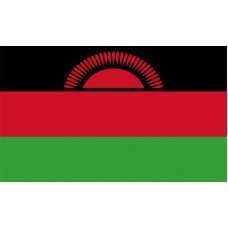 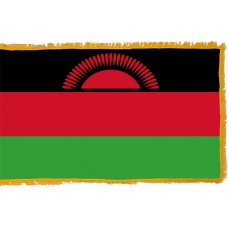 History of the Malawi Flag

The Malawi Flag features three horizontal bands in the colors of, black, red, and green (Pan-African colors). In the center of the black band is a rising sun. The black color represents the original people of the continent, the red color represents the blood lost during the struggle for independence, and the green color represents the nature and vegetation of the country. The rising sun represents the hope and freedom of the continent. The Malawi flag was adopted on July 6th, 1964 and was the national flag until it was changed in 2010 but was re-adopted again on May 28th, 2012. In 2010, the new flag used the same colors but the order of them were changed with the red band being at the top and the black band being in the middle. Instead of a rising sun, there was a full sun in the center of the flag. The President at the time, Bingu Wa Mutharika, approved the flag as he wanted the new flag to represent Malawi's progress since it gained independence. The people of Malawi did not want to change the national flag, but it was changed nonetheless. In 2012, the new President, Joyce Banda (first woman President) changed the Malawi flag back to the original one.

Malawi is a landlocked country in South-Eastern Africa (one of the smallest countries in Africa) that shares borders with Mozambique, Zambia, and Tanzania. It is also referred to as the "Warm Heart of Africa" due to the local's hospitality and kindness. The capital of Malawi is called Lilongue and is also the largest city. It was officially declared the world's poorest country with the economy being reliant on its agriculture only.

The largest source of income in Malawi is tobacco and is the most successful and profitable export. Tobacco is referred to as "green gold" as Malawi is very tobacco dependent for its income. Following tobacco, the second largest export is tea. One of Malawi's most renowned features is Lake Malawi (also known as Lake Nyasa). It is the 8th largest lake in the world, the 3rd largest lake in Africa, and the 2nd deepest lake in Africa. It is referred to as the "Calendar Lake" as it is 365 miles long and 52 miles wide (it takes up 1/3 of Malawi's area) and is home to more species of fish than any other lake as well as hippos and crocodiles. Lake Malawi is also renowned for its yearly international three-day music festival that was introduced in 2004 which over 3000 people attend from around the world.

In 1891, Malawi became a British Protectorate following the Portuguese interest in the country, to prevent invasion and the Portuguese establishing settlements. In 1907, Malawi was called Nyasaland until the country gained independence and was renamed Malawi.

O God bless our land of Malawi,
Keep it a land of peace.
Put down each and every enemy,
Hunger, disease, envy.
Join together all our hearts as one,
That we be free from fear.
Bless our leader, each and every one,
And Mother Malawi.

Our own Malawi, this land so fair,
Fertile and brave and free.
With its lakes, refreshing mountain air,
How greatly blest are we.
Hills and valleys, soil so rich and rare
Give us a bounty free.
Wood and forest, plains so broad and fair,
All - beauteous Malawi.

Freedom ever, let us all unite
To build up Malawi.
With our love, our zeal and loyalty,
Bringing our best to her.
In time of war, or in time of peace,
One purpose and one goal.
Men and women serving selflessly
In building Malawi.

We offer free images of the Malawi Flag in four sizes (small, medium, large, and high resolution). These images are distributed royalty free for both personal and educational use and are ideal for use in projects and on websites. If you choose to use one of our images, attribution is appreciated, but not required.

The following html code snippets can be copied and pasted to add an image of the Malawi Flag to your website: