We carry authentic Sudan Flags in both indoor and outdoor varieties. Our flags are proudly made in the United States from durable nylon and are printed with vibrant long-lasting inks. The Sudan national flag is often displayed at embassies, outside of businesses associated with Sudan, and at the homes of people who take great pride in their Sudan heritage.

Our indoor flags are finished with a pole hem and your choice of with or without golden fringe. Gold fringe is the traditional way to display an indoor flag, however, some people choose without fringe for a simple and clean look that is also less expensive. If you are looking for a complete indoor presentation set, our Build Your Own Indoor International Flag Set program allows you to select a durable nylon indoor Sudan Flag and choose between premium quality poles, bases, and ornaments, and tassel. For indoor applications, most buyers choose a 3ft. x 5ft. flag with an 8ft. pole, however, if you have a low ceiling, you may opt for a 7ft. pole, which is designed to work with drop ceilings. If you are looking for a very substantial international flag display, our 4ft. x 6ft. indoor flags can be paired with a 9ft. pole for our largest indoor display option.

Our outdoor international flags are finished with a canvas header and brass grommets and are offered in four sizes: 2ft. x 3ft., 3ft. x 5ft., 4ft. x 6ft., and 5ft. x 8ft., to fit any sized flagpole. Typically, outdoor flags are flown outside of government organizations, businesses, and institutions on in-ground and wall-mount flagpoles, however, some people also buy these flags to display their international pride at home. If you are looking for a wall-mount Sudan flag set to display outside of your home, our Build Your Own Outdoor International Flag Set program will allow you to choose between premium quality 6ft. poles and brackets to display the Sudan Flag on your front porch. Outdoor flags can also be displayed indoors on interior walls of your home with screws anchored in the wall to attach to the grommets.

In addition to the flags we offer for purchase, we maintain an archive of the audio and lyrics of the Sudan National Anthem, historical information about the Sudan flag, demographic data about Sudan, and free high resolution images of the Sudan flag for use in projects and on websites. 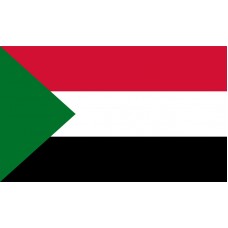 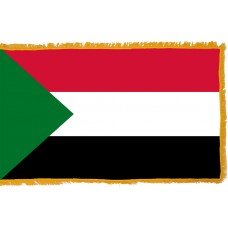 History of the Sudan Flag

The Sudan Flag features three horizontal bands in the colors of red, white, and black. On the left-hand side of the flag is a green triangle, pointing towards the center of the flag. The Sudan Flag is based on the Arab Liberation Flag and the colors used are the pan-arab colors. The colors together, represent the Arab unity and independence. The red color represents the struggle and battles fought for independence and the sacrifices that the people have had to make for their country. The white color represents peace, light, and optimism as well as the "White Flag League" who were the nationalists that opposed colonial rule in 1924 and the black color represents Sudan because in Arabic, Sudan translates as black. The black color of the flag also represents the nationalists who opposed colonial rule during the "Madhist Revolution." The green color of the Sudan flag represents Islam, and the rich agriculture and hope of the land. The Sudan Flag was adopted on May 20th, 1970.

Sudan (also now known as North Sudan) is a country in Africa that shares borders with Egypt, Red sea, Eritrea, Ethiopia, South Sudan, Central African Republic, Chad, and Libya. Sudan used to be the largest country in Africa until July 9th, 2011, when the Southern part left the country and was made into a separate country. It is now the third largest country in Africa. The capital and largest city of Sudan is called Khartoum. Khartoum is located where the Blue Nile and the White Nile merge.

In 1874, Egypt conquered Sudan and in 1882, following the British occupation of Egypt, the British took over Sudan in 1898. From 1898-1955, it was known as the Anglo-Egyptian Sudan. In 1953, Sudan was granted self-government by Egypt and Great Britain and was granted and gained full independence on January 1st, 1956. Following Sudan's independence, however, there has been a lot of conflict and wars between the North and the South, mainly due to religious differences. Sudan has been ruled by unstable governments and militaries since 1956 and the conflict between the Muslims of the North and the Christians of the South resulted in Africa's longest civil war between 1955-1972, where more than 2.5 million people lost their lives and approximately 4 million people "displaced."

Sudan is considered to be one of the poorest countries in the world. The economy, today, is mainly reliant on agriculture. As Sudan is one of the larger Arab states, tourism does contribute slightly to the economy. Due to the civil wars, the tourism industry heavily declined. The main tourist attraction in Sudan are the "Pyramids of Meroe." There is a collection of over 200 ancient pyramids here, the majority of them being tombs for the Kings and Queens that ruled during the "Meroitic Kingdom" which ruled the area for approximately 900 years.

We are the army of God and of our country,
We shall never fail when called to sacrifice.
We challenge death during hard times,
We buy glory, at the dearest price.
This land is ours, may our Sudan live well known among all nations.
People of the Sudan this is your banner
It carries the burden and protects your land

We offer free images of the Sudan Flag in four sizes (small, medium, large, and high resolution). These images are distributed royalty free for both personal and educational use and are ideal for use in projects and on websites. If you choose to use one of our images, attribution is appreciated, but not required.

The following html code snippets can be copied and pasted to add an image of the Sudan Flag to your website: