We carry authentic Cyprus Flags in both indoor and outdoor varieties. Our flags are proudly made in the United States from durable nylon and are printed with vibrant long-lasting inks. The Cyprus national flag is often displayed at embassies, outside of businesses associated with Cyprus, and at the homes of people who take great pride in their Cyprus heritage.

Our indoor flags are finished with a pole hem and your choice of with or without golden fringe. Gold fringe is the traditional way to display an indoor flag, however, some people choose without fringe for a simple and clean look that is also less expensive. If you are looking for a complete indoor presentation set, our Build Your Own Indoor International Flag Set program allows you to select a durable nylon indoor Cyprus Flag and choose between premium quality poles, bases, and ornaments, and tassel. For indoor applications, most buyers choose a 3ft. x 5ft. flag with an 8ft. pole, however, if you have a low ceiling, you may opt for a 7ft. pole, which is designed to work with drop ceilings. If you are looking for a very substantial international flag display, our 4ft. x 6ft. indoor flags can be paired with a 9ft. pole for our largest indoor display option.

Our outdoor international flags are finished with a canvas header and brass grommets and are offered in four sizes: 2ft. x 3ft., 3ft. x 5ft., 4ft. x 6ft., and 5ft. x 8ft., to fit any sized flagpole. Typically, outdoor flags are flown outside of government organizations, businesses, and institutions on in-ground and wall-mount flagpoles, however, some people also buy these flags to display their international pride at home. If you are looking for a wall-mount Cyprus flag set to display outside of your home, our Build Your Own Outdoor International Flag Set program will allow you to choose between premium quality 6ft. poles and brackets to display the Cyprus Flag on your front porch. Outdoor flags can also be displayed indoors on interior walls of your home with screws anchored in the wall to attach to the grommets.

In addition to the flags we offer for purchase, we maintain an archive of historical information about the Cyprus flag, demographic data about Cyprus, and free high resolution images of the Cyprus flag for use in projects and on websites. 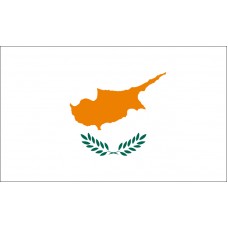 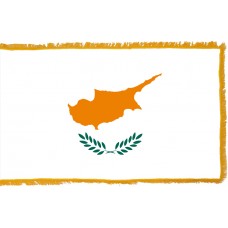 History of the Cyprus Flag

The Cyprus flag features a white background with the map of the country emblazoned in an orange/copper color with two olive branches below the map. The color white symbolizes peace, while the orange/copper color represents the copper that was found in Cyprus (also where the name originates from) and the two olive branches are used to show the peace between Cyprus and Turkey.

The Cyprus flag was adopted on August 16th, 1960, when it became an independent nation and was no longer under British rule. Upon gaining independence, the government of Cyprus held a design competition in 1960 to create a flag for the newly independent country. The judges of the contest were President Makarios III and the Vice-President Fazil Kucuk who selected the winning design which was was created by Ismet Guney, a Turkish artist and teacher from Cyprus.

The flag was designed specifically to omit the colors of the Greek or Turkish flag (blue and red) and does not utilize a cross or a crescent on the flag like the Turkish flag. The design was created to promote Unity amongst the Greek Cypriots and Turkish Cypriots, however, Turkish Cypriots view the flag negatively and associate the Republic of Cyprus with Turkish rule. The Cyprus flag is used only in South Cyprus by the Greek Cypriots. Turkish Cypriots fly the "Flag of Northern Cyprus," which consists of a white background with two horizontal red stripes; one across the top and one across the bottom with a red crescent and star between them. The Cyprus flag is one of two countries (the other being Korea) that uses the map of the country on the flag.

Cyprus was a part of the Ottoman Empire from 1570 until 1878, when it was given to the British as a Protectorate in exchange for military protection from Russia. Initially, when the country came under British control, the citizens was pleased as they thought it would benefit them. They soon found out that it did not as the British began to face a political problem when the Cypriots wanted to form a union with Greece (Enosis). In 1915, the British did offer Cyprus to Greece in exchange for military support during World War I, which was refused by the Greeks. In 1925, Cyprus became part of the British colony until 1960, despite their attempts to gain independence. In 1931, this tension caused many riots and in 1955, the EOKA was formed (National Organisation of Cypriot Fighters) who fought and struggled to end the British rule in Cyprus and for union with Greece. During this battle from 1955-1959, approximately 156 British and 148 Cypriots lost their lives. On February 19th, 1959, the London and Zurich agreement began the process for Cyprus independence.

Cyprus is an island country located in the Eastern Mediterranean. It is the third largest island in the world and neighbor countries include Turkey, Syria, Lebanon, Israel, Egypt, and Greece. The largest and capital city of Cyprus is Nicosia. Nicosia is home to the "Green Line" which divides the two nations: "Independent Republic of Cyprus" and the "Turkish Republic of Northern Cyprus," and is the only capital city in the world that has a division such as this.

Cyprus' economy relies on its thriving tourism industry. The country has many beautiful historic sights to visit and boasts some of the best beaches in Europe. Cyprus is also referred to as "The Playground of the Gods," as it is believed that the Goddess, "Aphrodite" rose out of the water and Aphrodite's rock is now one of many popular tourist attractions in the country.

We offer free images of the Cyprus Flag in four sizes (small, medium, large, and high resolution). These images are distributed royalty free for both personal and educational use and are ideal for use in projects and on websites. If you choose to use one of our images, attribution is appreciated, but not required.

The following html code snippets can be copied and pasted to add an image of the Cyprus Flag to your website: