We carry authentic Mexico Flags in both indoor and outdoor varieties. Our flags are proudly made in the United States from durable nylon and are printed with vibrant long-lasting inks. The Mexico national flag is often displayed at embassies, outside of businesses associated with Mexico, and at the homes of people who take great pride in their Mexico heritage.

Our indoor flags are finished with a pole hem and your choice of with or without golden fringe. Gold fringe is the traditional way to display an indoor flag, however, some people choose without fringe for a simple and clean look that is also less expensive. If you are looking for a complete indoor presentation set, our Build Your Own Indoor International Flag Set program allows you to select a durable nylon indoor Mexico Flag and choose between premium quality poles, bases, and ornaments, and tassel. For indoor applications, most buyers choose a 3ft. x 5ft. flag with an 8ft. pole, however, if you have a low ceiling, you may opt for a 7ft. pole, which is designed to work with drop ceilings. If you are looking for a very substantial international flag display, our 4ft. x 6ft. indoor flags can be paired with a 9ft. pole for our largest indoor display option.

Our outdoor international flags are finished with a canvas header and brass grommets and are offered in four sizes: 2ft. x 3ft., 3ft. x 5ft., 4ft. x 6ft., and 5ft. x 8ft., to fit any sized flagpole. Typically, outdoor flags are flown outside of government organizations, businesses, and institutions on in-ground and wall-mount flagpoles, however, some people also buy these flags to display their international pride at home. If you are looking for a wall-mount Mexico flag set to display outside of your home, our Build Your Own Outdoor International Flag Set program will allow you to choose between premium quality 6ft. poles and brackets to display the Mexico Flag on your front porch. Outdoor flags can also be displayed indoors on interior walls of your home with screws anchored in the wall to attach to the grommets.

In addition to the flags we offer for purchase, we maintain an archive of the audio and lyrics of the Mexico National Anthem, historical information about the Mexico flag, demographic data about Mexico, and free high resolution images of the Mexico flag for use in projects and on websites. 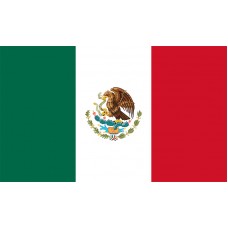 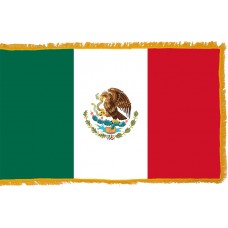 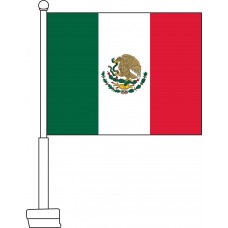 History of the Mexican Flag

Today, the green color represents hope and victory, the white color represents purity, and the red color represents union. The Mexian flag was first designed by an army general named Agustin de Iturbide and the red, white, and green were the colors of the liberation army. Throughout the years, despite maintaining the same colors, there have been alterations to the flag. The first flag used, adopted on November 2nd, 1821, had the same colors but the eagle in the center wore a crown. The second official flag used in 1823 had the same three vertical bands but the eagle no longer wore a crown. The 3rd official flag, adopted in 1864, again, used the same colors but instead of an eagle in the center of the flag, there was a crowned eagle in each corner.

Mexico (which is also known as Estados Unidos Mexicanos – United Mexican States) is a country in North America that shares borders with America, Guatemala, and Belize. The border between America and Mexico is the second longest border in the world. The capital city of Mexico is Mexico City which is the oldest city in North America. The region that Mexico is located, is known as the "Ring of Fire" due to the violent volcanoes and frequent earthquakes.

In Ancient times, many different cultures resided in Mexico which included, Olmec Culture, Mayans, and Aztecs who resided for approximately 13,000 years. In 1519, Mexico came under Spanish control when Hernan Cortes came to Mexico. It was under Spanish Control for almost 300 years, until the Mexican people revolted against the Spanish, which was led by Father Hidalgo on September 16th, 1810. The Spanish surrendered in 1821, and Mexico obtained its independence. Due to this, Father Hidalgo, is considered to be, the father of modern Mexico.

Mexico is a popular tourist destination and tourism contributes to a lot of the economy. As well as the beautiful beaches that it is home to, Mexico is also home to some grand, historical and monumental buildings, which include "El Angel" which is the Angel of Independence Monument in the capital that was built in 1900 and represents the country's independence and victory

Let gird, oh Fatherland, your brow with olive
by the divine archangel of peace,
for in heaven your eternal destiny
was written by the finger of God.
But if some enemy outlander should dare
to profane your ground with his step,
think, oh beloved Fatherland, that heaven
has given you a soldier in every son.

War, war without quarter to any who dare
to tarnish the coat of arms!
War, war! Let the national banners
be soaked in waves of blood.
War, war! In the mountain, in the valley,
let the cannons thunder in horrid unison
and may the sonorous echoes resound
with cries of Union! Liberty!

O, Motherland, ere your children, defenseless
bend their neck beneath the yoke,
may your fields be watered with blood,
may their foot be printed in blood.
And may your temples, palaces and towers
collapse with horrid clamor,
and may their ruins continue on, saying:
Of one thousand heroes, here the Motherland began.

Motherland! Motherland! your children swear to you
to breathe their last for your sake,
if the bugle with its warlike accent
persuades them to battle with courage.
For you, olive wreathes!
A memory for them of glory!
For you, a laurel of victory!
A tomb for them of honor!

We offer free images of the Mexico Flag in four sizes (small, medium, large, and high resolution). These images are distributed royalty free for both personal and educational use and are ideal for use in projects and on websites. If you choose to use one of our images, attribution is appreciated, but not required.

The following html code snippets can be copied and pasted to add an image of the Mexico Flag to your website: