We carry authentic Syria Flags in both indoor and outdoor varieties. Our flags are proudly made in the United States from durable nylon and are printed with vibrant long-lasting inks. The Syria national flag is often displayed at embassies, outside of businesses associated with Syria, and at the homes of people who take great pride in their Syrian heritage.

Our indoor flags are finished with a pole hem and your choice of with or without golden fringe. Gold fringe is the traditional way to display an indoor flag, however, some people choose without fringe for a simple and clean look that is also less expensive. If you are looking for a complete indoor presentation set, our Build Your Own Indoor International Flag Set program allows you to select a durable nylon indoor Syria Flag and choose between premium quality poles, bases, and ornaments, and tassel. For indoor applications, most buyers choose a 3ft. x 5ft. flag with an 8ft. pole, however, if you have a low ceiling, you may opt for a 7ft. pole, which is designed to work with drop ceilings. If you are looking for a very substantial international flag display, our 4ft. x 6ft. indoor flags can be paired with a 9ft. pole for our largest indoor display option.

Our outdoor international flags are finished with a canvas header and brass grommets and are offered in four sizes: 2ft. x 3ft., 3ft. x 5ft., 4ft. x 6ft., and 5ft. x 8ft., to fit any sized flagpole. Typically, outdoor flags are flown outside of government organizations, businesses, and institutions on in-ground and wall-mount flagpoles, however, some people also buy these flags to display their international pride at home. If you are looking for a wall-mount Syria flag set to display outside of your home, our Build Your Own Outdoor International Flag Set program will allow you to choose between premium quality 6ft. poles and brackets to display the Syria Flag on your front porch. Outdoor flags can also be displayed indoors on interior walls of your home with screws anchored in the wall to attach to the grommets.

In addition to the flags we offer for purchase, we maintain an archive of the audio and lyrics of the Syria National Anthem, historical information about the Syria flag, demographic data about Syria, and free high resolution images of the Syria flag for use in projects and on websites. 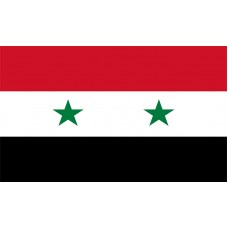 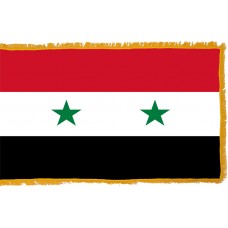 History of the Syrian Flag

The Syria Flag features three horizontal bands in the colors of red, white, and black. In the center of the white band are two green stars. It is thought that the Syria Flag is based on the Arab Liberation Flag which consisted of four colors that represented the four major dynasties of Arab history. The red color of the flag represents the "Hashemite Dynasty" as well as the struggle and blood-shed for freedom.

Syria is a country in the Middle East, in Western Asia and shares borders with Lebanon, Israel, Turkey, Iraq, and Jordan.

The capital city of Syria is called Damascus. Damascus is also referred to as "Jasmine City" and is one of the oldest inhabited cities in the world and is home to over 125 monuments representing different periods of Syria's history. One of its renowned monuments is called "Umayyad Mosque" which is also referred to as the "Great Mosque of Damascus" and is the 4th holiest place in Islam as well as one of the largest mosques in the world. An important plateau in Syria which is called "Golan Heights" overlooks four countries and is where Syria, Lebanon, Jordan, and Israel meet. It is often referred to as "Shouting Valley" as relatives from the different parts used to shout across to each other through megaphones.

Syria is a county that has endured many years of invasion, war, and conflict and is still currently a major battleground with armies from 34 different countries fighting and using Syria as a base. Syria, in 1500BC was invaded by the Egyptians. It then eventually became part of the Roman Empire as well as the Ottoman Empire. Following WWI, France gained control of Syria until Syria gained independence on April 17th, 1946. Following its independence, Syria encountered many invasions and the country had a lack of political stability, and as a result, became part of the United Arab Republic with Egypt in 1958 until their separation in 1961. From 1970, Hafez al-Assad took power and control of the country and since then, his family have had control of Syria.

Republic Under An Authoritarian Military-Dominated Regime

Guardians of the Homeland,
Peace on you;
Our proud spirits will
Not be subdued.
The abode of Arabism,
A hallowed sanctuary;
The seat of the stars,
An inviolable preserve.

We offer free images of the Syria Flag in four sizes (small, medium, large, and high resolution). These images are distributed royalty free for both personal and educational use and are ideal for use in projects and on websites. If you choose to use one of our images, attribution is appreciated, but not required.

The following html code snippets can be copied and pasted to add an image of the Syria Flag to your website: