We carry authentic Taiwan Flags in both indoor and outdoor varieties. Our flags are proudly made in the United States from durable nylon and are printed with vibrant long-lasting inks. The Taiwan national flag is often displayed at embassies, outside of businesses associated with Taiwan, and at the homes of people who take great pride in their Taiwan heritage.

Our indoor flags are finished with a pole hem and your choice of with or without golden fringe. Gold fringe is the traditional way to display an indoor flag, however, some people choose without fringe for a simple and clean look that is also less expensive. If you are looking for a complete indoor presentation set, our Build Your Own Indoor International Flag Set program allows you to select a durable nylon indoor Taiwan Flag and choose between premium quality poles, bases, and ornaments, and tassel. For indoor applications, most buyers choose a 3ft. x 5ft. flag with an 8ft. pole, however, if you have a low ceiling, you may opt for a 7ft. pole, which is designed to work with drop ceilings. If you are looking for a very substantial international flag display, our 4ft. x 6ft. indoor flags can be paired with a 9ft. pole for our largest indoor display option.

Our outdoor international flags are finished with a canvas header and brass grommets and are offered in four sizes: 2ft. x 3ft., 3ft. x 5ft., 4ft. x 6ft., and 5ft. x 8ft., to fit any sized flagpole. Typically, outdoor flags are flown outside of government organizations, businesses, and institutions on in-ground and wall-mount flagpoles, however, some people also buy these flags to display their international pride at home. If you are looking for a wall-mount Taiwan flag set to display outside of your home, our Build Your Own Outdoor International Flag Set program will allow you to choose between premium quality 6ft. poles and brackets to display the Taiwan Flag on your front porch. Outdoor flags can also be displayed indoors on interior walls of your home with screws anchored in the wall to attach to the grommets.

In addition to the flags we offer for purchase, we maintain an archive of historical information about the Taiwan flag, demographic data about Taiwan, and free high resolution images of the Taiwan flag for use in projects and on websites. 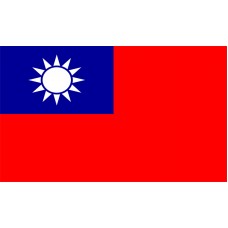 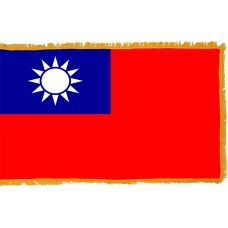 History of the Taiwan Flag

The Taiwan flag features a red field with a navy-blue square in the top left-hand corner and a white sun in the middle of the square that has twelve triangular rays. The Taiwan flag is officially described as the "blue sky, white sun, and a wholly red Earth" and on national day in 1929, the president claimed, "As long as a national flag with blue sky, white sun and a wholly red earth flies on the land of China, it symbolizes the independence and liberty of the descendants of the Huang Emperor." The twelve rays of the sun represent the twelve months and the twelve traditional "Shichen" which is a traditional unit of time that corresponds to two modern hours.

The red color represents the blood of those who sacrificed themselves for Taiwan and to overthrow the "Qing Dynasty" as well as representing their livelihood and fraternity, the blue color represents nationalism and freedom, and the white color represents democracy and equality. The Taiwan flag was officially adopted by Taiwan on October 25th, 1945. The first Taiwan flag that was used was in 1663 and featured a white field with the "Zheng" character in the center of it.

Taiwan, which is now known as the "Republic of China" is an island that consists of a cluster of islands that were part of China. It is bordered by the South China Sea, East China Sea, and the Philippine Sea. Taiwan is not very recognized as an independent country or separate from China. The capital of Taiwan is called Taipei and the oldest city that was established in 1590 is called T'ai-nan. Taiwan was formerly known as "Formosa." When the Portuguese discovered the island in 1590, they named it "Ilha Formosa" which translates as "beautiful island." Prior to the Portuguese discovering the island, the Chinese referred to Taiwan as "a mudball across the sea, not worthy of China."

In the 1700s, the Dutch colonized the islands of Taiwan, until they came under the control of the "Qing Dynasty" which was the last Chinese Dynasty. In 1895, the Japanese invaded and captured the island from the Chinese until WWI, when Taiwan came under the control of the Chinese Nationalists. During WWII, Taiwan briefly came under the rule of the Japanese again. Taiwan is now known as one of the "Four Asian Tigers," (countries that developed into high-income countries through rapid industrialization) along with Singapore, South Korea, and Hong Kong. This is due to all the changes that were made to the public and work sectors during the Japanese rule, prior to and during WWII.

Taiwan has become a popular tourist destination with its main attractions being, "The National Chiang Kai-Shek Memorial Hall" that was erected in memory of the former president of Taiwan and is located in the capital, Taipei. The National Palace Museum that is also located in Taipei is home to over 700,000 Chinese artifacts and artworks that represent 8,000 years of history. The beaches of Taiwan are also thought to be the best beaches in Asia, ranging from white and golden sand beaches to black sand and white coral beaches.

We offer free images of the Taiwan Flag in four sizes (small, medium, large, and high resolution). These images are distributed royalty free for both personal and educational use and are ideal for use in projects and on websites. If you choose to use one of our images, attribution is appreciated, but not required.

The following html code snippets can be copied and pasted to add an image of the Taiwan Flag to your website: