We carry authentic Netherlands Flags in both indoor and outdoor varieties. Our flags are proudly made in the United States from durable nylon and are printed with vibrant long-lasting inks. The Netherlands national flag is often displayed at embassies, outside of businesses associated with Netherlands, and at the homes of people who take great pride in their Netherlands heritage.

Our indoor flags are finished with a pole hem and your choice of with or without golden fringe. Gold fringe is the traditional way to display an indoor flag, however, some people choose without fringe for a simple and clean look that is also less expensive. If you are looking for a complete indoor presentation set, our Build Your Own Indoor International Flag Set program allows you to select a durable nylon indoor Netherlands Flag and choose between premium quality poles, bases, and ornaments, and tassel. For indoor applications, most buyers choose a 3ft. x 5ft. flag with an 8ft. pole, however, if you have a low ceiling, you may opt for a 7ft. pole, which is designed to work with drop ceilings. If you are looking for a very substantial international flag display, our 4ft. x 6ft. indoor flags can be paired with a 9ft. pole for our largest indoor display option.

Our outdoor international flags are finished with a canvas header and brass grommets and are offered in four sizes: 2ft. x 3ft., 3ft. x 5ft., 4ft. x 6ft., and 5ft. x 8ft., to fit any sized flagpole. Typically, outdoor flags are flown outside of government organizations, businesses, and institutions on in-ground and wall-mount flagpoles, however, some people also buy these flags to display their international pride at home. If you are looking for a wall-mount Netherlands flag set to display outside of your home, our Build Your Own Outdoor International Flag Set program will allow you to choose between premium quality 6ft. poles and brackets to display the Netherlands Flag on your front porch. Outdoor flags can also be displayed indoors on interior walls of your home with screws anchored in the wall to attach to the grommets. 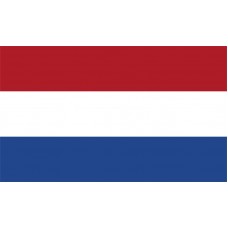 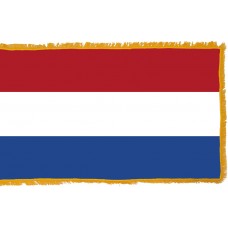 History of the Netherlands Flag

The Netherlands flag features three horizontal bands in the colors of red, white, and blue. It is practically the same as the Luxembourg flag except it is slightly shorter and the blue is a darker shade. The official colors of the flag are known as bright vermilion, silver, and cobalt blue. The Netherlands flag was first introduced in 1572 and the colors were originally orange, white, and blue and were based on the heraldic colors of Prince William of Orange and were the same colors used on the Coat of Arms. The orange color was replaced due to the fact that the orange dye on the flag kept turning red in the sun. William of Orange was a very important figure in the Netherlands and was a Dutch ruler who led the battle against Spain for independence in 1568. The Netherlands flag was officially adopted on February 19th, 1937 even though it had been introduced a lot earlier and is thought to be the oldest tricolor flag in the world.

The Netherlands became part of Spain in 1477 and in 1568, due to religious reasons, the Dutch began a war against the Spanish. The majority of the Dutch were protestants and the King of Spain did not approve of this, wanting the population to be Roman Catholic and demanded that all the protestants had to be executed. This war lasted until 1648, when the Dutch and Spanish declared peace, and it is known as the "Eighty Years War." Following the Eighty Years War, the Dutch were allowed to keep the areas that they had conquered and when it gained its independence and became a republic in the 17th Century, it was considered one of the richest countries in the world and was referred to in the Netherlands as the "Golden Age." In 1795, the French attacked and occupied the Netherlands. In 1806, the French emperor Napoleon declared his brother Louis Bonaparte to be King of the Netherlands but was not satisfied with this and eventually made the Netherlands a part of France in 1810. In 1815, following Napoleon’s defeat, the Netherlands, once again, became independent.

The Netherlands remained a very stable country after their independence and they did not fight in WWI, they chose to remain neutral. In 1940, during WWII however, the Germans invaded and occupied the Netherlands and set up the concentration camps. Approximately 250,000 people died during the five years that the Nazis occupied the Netherlands, including a little Jewish girl from the Netherlands called Anne Frank who kept a diary of her tragic experiences while herself and her family were in hiding that became very famous following her death. In 1944, the Americans, Canadians, and Polish managed to free the Netherlands from the Nazi rule, once again making it an independent state.

William of Nassau, scion
Of a Dutch and ancient line,
I dedicate undying
Faith to this land of mine.
A prince am I undaunted,
Of Orange, ever free,
To the king of Spain I've granted
A lifelong loyalty.

I've ever tried to live in
The fear of God's command
And therefore I've been driven,
From people, home, and land,
But God, I trust, will rate me
His willing instrument
And one day reinstate me
Into my government.

Let no despair betray you,
My subjects true and good.
The Lord will surely stay you
Though now you are pursued.
He who would live devoutly
Must pray God day and night
To throw His power about me
As champion of your right.

Life and my all for others
I sacrificed, for you!
And my illustrious brothers
Proved their devotion too.
Count Adolf, more's the pity,
Fell in the Frisian fray,
And in the eternal city
Awaits the judgement day.

I, nobly born, descended
From an imperial stock.
An empire's prince, defended
(Braving the battle's shock
Heroically and fearless
As pious Christian ought)
With my life's blood the peerless
Gospel of God our Lord.

A shield and my reliance,
O God, Thou ever wert.
I'll trust unto Thy guidance.
O leave me not ungirt.
That I may stay a pious
Servant of Thine for aye
And drive the plagues that try us
And tyranny away.

My God, I pray thee, save me
From all who do pursue
And threaten to enslave me,
Thy trusted servant true.
O Father, do not sanction
Their wicked, foul design,
Don't let them wash their hands in
This guiltless blood of mine.

O David, thou soughtest shelter
From King Saul's tyranny.
Even so I fled this welter
And many a lord with me.
But God the Lord did save him
From exile and its hell
And, in His mercy, gave him
A realm in Israel.

Fear not 't will rain sans ceasing
The clouds are bound to part.
I bide that sight so pleasing
Unto my princely heart,
Which is that I with honor
Encounter death in war,
And meet in heaven my Donor,
His faithful warrior.

Nothing so moves my pity
As seeing through these lands,
Field, village, town and city
Pillaged by roving hands.
O that the Spaniards rape thee,
My Netherlands so sweet,
The thought of that does grip me
Causing my heart to bleed.

Astride on steed of mettle
I've waited with my host
The tyrant's call to battle,
Who durst not do his boast.
For, near Maastricht ensconced,
He feared the force I wield.
My horsemen saw one bounce it
Bravely across the field.

Surely, if God had willed it,
When that fierce tempest blew,
My power would have stilled it,
Or turned its blast from you
But He who dwells in heaven,
Whence all our blessings flow,
For which aye praise be given,
Did not desire it so.

Steadfast my heart remaineth
In my adversity
My princely courage straineth
All nerves to live and be.
I've prayed the Lord my Master
With fervid heart and tense
To save me from disaster
And prove my innocence.

Alas! my flock. To sever
Is hard on us. Farewell.
Your Shepherd wakes, wherever
Dispersed you may dwell,
Pray God that He may ease you.
His Gospel be your cure.
Walk in the steps of Jesus
This life will not endure.

Unto the Lord His power
I do confession make
That ne'er at any hour
Ill of the King I spake.
But unto God, the greatest
Of Majesties I owe
Obedience first and latest,
For Justice wills it so.

We offer free images of the Netherlands Flag in four sizes (small, medium, large, and high resolution). These images are distributed royalty free for both personal and educational use and are ideal for use in projects and on websites. If you choose to use one of our images, attribution is appreciated, but not required.

The following html code snippets can be copied and pasted to add an image of the Netherlands Flag to your website: