We carry authentic Panama Flags in both indoor and outdoor varieties. Our flags are proudly made in the United States from durable nylon and are printed with vibrant long-lasting inks. The Panama national flag is often displayed at embassies, outside of businesses associated with Panama, and at the homes of people who take great pride in their Panama heritage.

Our indoor flags are finished with a pole hem and your choice of with or without golden fringe. Gold fringe is the traditional way to display an indoor flag, however, some people choose without fringe for a simple and clean look that is also less expensive. If you are looking for a complete indoor presentation set, our Build Your Own Indoor International Flag Set program allows you to select a durable nylon indoor Panama Flag and choose between premium quality poles, bases, and ornaments, and tassel. For indoor applications, most buyers choose a 3ft. x 5ft. flag with an 8ft. pole, however, if you have a low ceiling, you may opt for a 7ft. pole, which is designed to work with drop ceilings. If you are looking for a very substantial international flag display, our 4ft. x 6ft. indoor flags can be paired with a 9ft. pole for our largest indoor display option.

Our outdoor international flags are finished with a canvas header and brass grommets and are offered in four sizes: 2ft. x 3ft., 3ft. x 5ft., 4ft. x 6ft., and 5ft. x 8ft., to fit any sized flagpole. Typically, outdoor flags are flown outside of government organizations, businesses, and institutions on in-ground and wall-mount flagpoles, however, some people also buy these flags to display their international pride at home. If you are looking for a wall-mount Panama flag set to display outside of your home, our Build Your Own Outdoor International Flag Set program will allow you to choose between premium quality 6ft. poles and brackets to display the Panama Flag on your front porch. Outdoor flags can also be displayed indoors on interior walls of your home with screws anchored in the wall to attach to the grommets.

In addition to the flags we offer for purchase, we maintain an archive of the audio and lyrics of the Panama National Anthem, historical information about the Panama flag, demographic data about Panama, and free high resolution images of the Panama flag for use in projects and on websites. 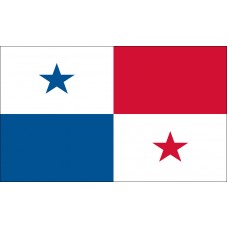 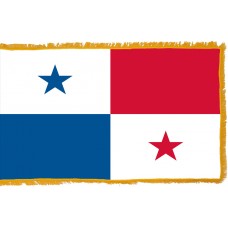 History of the Panama Flag

The Panama Flag is divided into four rectangles, which are all different. The top left rectangle consists of a white field with a blue 5-pointed star in the center of it. The top right triangle is just a plain red field. The bottom left rectangle is a plain blue field and the bottom right rectangle is a white field with a red 5-pointed star in the center of it. The Panama Flag as a whole, was designed to represent the different political parties and the political situation in the country at the time. The white color of the flag represents peace. The blue color of the Panama Flag represents the purity and honesty of the country (the conservative party) and the red color of the flag represents the authority and law of the country (Liberal party). The Panama Flag was created by Maria De La Ossa De Amador who was the first lady of Panama and it was made on November 1st, 1903 and officially adopted on March 25th, 1925. Flag day is officially celebrated on November 4th, the day after Panama gained independence from Colombia on November 3rd, 1903.

Panama is a country in Central America that shares borders with Costa Rica, Colombia, the Pacific Ocean, and the Atlantic Ocean. The capital and largest city of Panama is called, Panama City. Panama is most well-known and famous for the Panama Canal, which is a man-made waterway that joins the Atlantic with the Pacific Ocean. The canal was started in 1881 by the French but had to be stopped, mainly due to the mortality rate of the workers and was continued in 1904 by the Americans, who completed it (using 75,000 workers) and opened it on August 15th, 1914. The canal extends for 52 miles.

Approximately 3,000,000 years ago, when the land bridge between North and South America was complete, the Isthmus of Panama was formed. It is thought that the first people that settled in Panama were the Chibchan, Chocoan, and Cueva people. In 1501, Rodrigo De Bastida was the first European to visit and explore the Isthmus of Panama, followed by Christopher Columbus a year later. In 1513, Vasco Nunez De Balboa trekked from the Atlantic to the Pacific and, as a result, Panama became the center and crossroads for the majority of Spain's empire and trading (mainly gold and silver). From 1538-1821, Panama came under Spain's control and became a colony. In 1821, following the American-Spanish war, Panama joined with Colombia, Ecuador, and Venezuela, forming the Republic of Gran Colombia. After the collapse of the Republic of Gran Colombia in 1830, Panama remained with Colombia. In 1903, with the support of the USA, Panama managed to gain independence from Colombia.

The majority of Panama's economy is reliant on tourism and trading and the Panama Canal is responsible for 1/3 of the economy. It is also considered to be one of the Seven World Wonders.

Hymn of the Isthmus (Himno Istmeno)

At last we reached victory
In the joyous field of the union;
With ardent fires of glory
A new nation is alight.

It is necessary to cover with a veil
The past times of Calvary and cross;
Let now the blue skies be adorned with
The splendid light of the concord.

Progress caresses your path.
To the rhythm of a sublime song,
You see both your seas roar at your feet
Giving you a path to your noble mission.

In your soil covered with flowers
To the kisses of the warm clouds of dust,
Warrior roars have ceased;
Only fraternal love reigns.

Ahead the shovel and pick,
At work without any more dilation,
and we will be as such at work and gala
of this fruitful world of Columbus.

We offer free images of the Panama Flag in four sizes (small, medium, large, and high resolution). These images are distributed royalty free for both personal and educational use and are ideal for use in projects and on websites. If you choose to use one of our images, attribution is appreciated, but not required.

The following html code snippets can be copied and pasted to add an image of the Panama Flag to your website: