We carry authentic Belgium Flags in both indoor and outdoor varieties. Our flags are proudly made in the United States from durable nylon and are printed with vibrant long-lasting inks. The Belgium national flag is often displayed at embassies, outside of businesses associated with Belgium, and at the homes of people who take great pride in their Belgian heritage.

Our indoor flags are finished with a pole hem and your choice of with or without golden fringe. Gold fringe is the traditional way to display an indoor flag, however, some people choose without fringe for a simple and clean look that is also less expensive. If you are looking for a complete indoor presentation set, our Build Your Own Indoor International Flag Set program allows you to select a durable nylon indoor Belgium Flag and choose between premium quality poles, bases, and ornaments, and tassel. For indoor applications, most buyers choose a 3ft. x 5ft. flag with an 8ft. pole, however, if you have a low ceiling, you may opt for a 7ft. pole, which is designed to work with drop ceilings. If you are looking for a very substantial international flag display, our 4ft. x 6ft. indoor flags can be paired with a 9ft. pole for our largest indoor display option.

Our outdoor international flags are finished with a canvas header and brass grommets and are offered in four sizes: 2ft. x 3ft., 3ft. x 5ft., 4ft. x 6ft., and 5ft. x 8ft., to fit any sized flagpole. Typically, outdoor flags are flown outside of government organizations, businesses, and institutions on in-ground and wall-mount flagpoles, however, some people also buy these flags to display their international pride at home. If you are looking for a wall-mount Belgium flag set to display outside of your home, our Build Your Own Outdoor International Flag Set program will allow you to choose between premium quality 6ft. poles and brackets to display the Belgium Flag on your front porch. Outdoor flags can also be displayed indoors on interior walls of your home with screws anchored in the wall to attach to the grommets.

In addition to the flags we offer for purchase, we maintain an archive of the audio and lyrics of the Belgium National Anthem, historical information about the Belgium flag, demographic data about Belgium, and free high resolution images of the Belgium flag for use in projects and on websites. 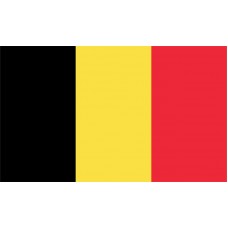 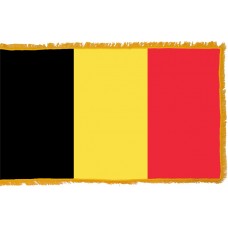 History of the Belgian Flag

The Flag of Belgium features a tricolor design of three equal-sized vertical strips of black, gold, and red. The black stripe is positioned closest to the house-side of the flag, the gold stripe is in the middle, and the red stripe is positioned on the fly-side of the flag. The tricolor design is modeled after the flag of France. Belgium gained independence from the Netherlands in 1830. The original flag used by the country was a tricolor flag with the same three colors used today, but in a horizontal formation. The current design was with vertical stripes is modeled after the French flag and was adopted as the official flag of Belgium on January 23rd, 1831.

The colors used on the Belgium Flag pay homage to the former coat of Arms of the Dutchy of Brabant, a state of the Holy Roman Empire that existed between 1183 and 1430. The coat of arms featured a gold lion upon a black background with the lion's tongue and claws appearing in red. Each color of the flag represents one element of the coat of arms. The location of Brabant geographically covered the areas that are now the Belgian provinces of Flemish Brabant, Waloon Brabant, and Antwerp. An extra sign of Brabant's importance to the Belgians lies in the name of the country's National Anthem, "La Brabanconne".

Perhaps surprisingly for such a small country (it is about an eighth of the size of the United Kingdom), Belgium has been home to numerous large-scale battles throughout its history. Most people will be familiar with how Napoleon was defeated at Waterloo in 1814 by a coalition of British and Prussian armies. 100 years later Belgium saw another bloodbath which was inflicted by the Germans at Liege when they secretly developed the "Big Bertha" gun which practically wiped out Fort Loncin which was intended to be the mainstay of Belgium's defense.

Throughout its history Belgium was fought over by many different countries. It has been governed at different times by the Gauls, the Celts, the Romans, the Spaniards, the Austrians, and the Dutch. In its modern form as an independent state it has two ethnicities: the Northern Flemish part where a dialect of Dutch is spoken, and the Southern Walloon part where French is spoken. Many, but not all, Belgians are bilingual. It is interesting to Belgians seeking directions or information from a stranger. They will cautiously check out in which language to address the other person: "Neerlandais?" "Francais?." Although there is some tension between the two ethnicities, the country operates a remarkably bilingual Parliament. Like the United States, the Parliament has two houses. The Belgian Federal Parliament consists of two governing bodies: the House of Representatives and the Senate.

The EU Parliament is located in Brussels, which has made it a mainstay of the Belgian economy. The vast number of highly paid officials living and working in and around the area because of the EU Parliament provides a boost to the local economy with the resultant need for housing, schooling, food, heating, and social amenities.

Despite its fertile soil and green pastures resulting from high levels of rainfall, agriculture only accounts for less than 1% of the economy. Approximately 21% comes from industry and the remaining 18% or so from the service industries. This is aided by the Belgian's excellent transportation infrastructure which consists of roads, railways, and ports.

We offer free images of the Belgium Flag in four sizes (small, medium, large, and high resolution). These images are distributed royalty free for both personal and educational use and are ideal for use in projects and on websites. If you choose to use one of our images, attribution is appreciated, but not required.

The following html code snippets can be copied and pasted to add an image of the Belgium Flag to your website: