We carry authentic Romania Flags in both indoor and outdoor varieties. Our flags are proudly made in the United States from durable nylon and are printed with vibrant long-lasting inks. The Romania national flag is often displayed at embassies, outside of businesses associated with Romania, and at the homes of people who take great pride in their Romanian heritage.

Our indoor flags are finished with a pole hem and your choice of with or without golden fringe. Gold fringe is the traditional way to display an indoor flag, however, some people choose without fringe for a simple and clean look that is also less expensive. If you are looking for a complete indoor presentation set, our Build Your Own Indoor International Flag Set program allows you to select a durable nylon indoor Romania Flag and choose between premium quality poles, bases, and ornaments, and tassel. For indoor applications, most buyers choose a 3ft. x 5ft. flag with an 8ft. pole, however, if you have a low ceiling, you may opt for a 7ft. pole, which is designed to work with drop ceilings. If you are looking for a very substantial international flag display, our 4ft. x 6ft. indoor flags can be paired with a 9ft. pole for our largest indoor display option.

Our outdoor international flags are finished with a canvas header and brass grommets and are offered in four sizes: 2ft. x 3ft., 3ft. x 5ft., 4ft. x 6ft., and 5ft. x 8ft., to fit any sized flagpole. Typically, outdoor flags are flown outside of government organizations, businesses, and institutions on in-ground and wall-mount flagpoles, however, some people also buy these flags to display their international pride at home. If you are looking for a wall-mount Romania flag set to display outside of your home, our Build Your Own Outdoor International Flag Set program will allow you to choose between premium quality 6ft. poles and brackets to display the Romania Flag on your front porch. Outdoor flags can also be displayed indoors on interior walls of your home with screws anchored in the wall to attach to the grommets.

In addition to the flags we offer for purchase, we maintain an archive of the audio and lyrics of the Romania National Anthem, historical information about the Romania flag, demographic data about Romania, and free high resolution images of the Romania flag for use in projects and on websites. 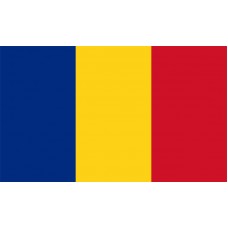 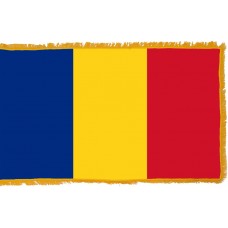 History of the Romanian Flag

The Romania Flag consists of three vertical bands, in the colors of, blue, yellow, and red. The three colors of the flag represent the three provinces of the country, which are, Moldavia, Wallachia, and Transylvania. The red and blue color represents the province of Moldavia and the red and yellow color represent the province of Wallachia. The Romania flag that is used today was officially adopted on December 27th, 1989. In 1878, a year after Romania gained independence, the national flag used was the same one that is used today, except that it had the country's coat of arms in the center of it. In 1989, the coat of arms was removed from the flag.

Romania is a country in Europe that shares border with the Black Sea, Bulgaria, Ukraine, Serbia, Hungary, and Moldova. The capital city of Romania is Bucharest. The name Romania is derived from the Latin word, ‘Romanus’ which translates as "Citizen of Rome." The area that we now know as Romania was once colonized by the Romans. Some of the oldest human remains that have been found in Europe, were discovered in Romania. In 1859, the country of Romania was created when the provinces of Moldavia and Wallachia (formerly under the Ottoman Empire), united. Romania, however, was still a vassal of the Ottoman Empire until it gained full independence in 1877. In 1881, it became known as the Kingdom of Romania. At the end of WWI, Transylvania joined what is known as the Kingdom of Romania and Carol I became the first King of the country.

Romania's economy is mainly reliant on manufacturing, electronic products, chemical goods, and pharmaceuticals. It is also one of the richest countries in Europe in terms of gold and is the only country in Europe that has a museum dedicated to gold. It is one of the least visited countries in Europe, despite the beautiful and historic sites that it is home to, such as "Peles Castle," which is considered to be one of the most beautiful castles in Europe and is also the first castle in Europe to be electrified.

Romania is also home to the Carpathian Mountains, where one can find one of the largest virgin forests in the world, which houses over 400 mammal species. The city of Brasov is home to the "Black Church" which is one of the finest examples of Gothic architecture and home to the largest organ in Europe and the heaviest bell in Romania. Another main tourist attraction is "The Transfagarasan" which is a famous road with the longest road tunnel. The road is at the highest altitude (2,045m) and is referred to as the "road of clouds" as it is claimed that once you are there you "feel like you are walking on air." The "Bigar Cascade Falls" which is one of the top attractions that Romania has, were voted as the most beautiful waterfalls in Europe due to the way that they fall.

Romanian, awaken your Spirit from the sleep of Death
Impressed upon you by Tyrannies of barbarians;
Now or never, fashion a new Fate,
Stronger than your foes', Fate for them to bow to.

Now or never, our legacy prove to all,
That through our veins still flows the Blood of Ancient Rome
That in our chests we proudly hail a Name,
Triumphant in battle, the Name of Trajan.

Raise your strong brow and gaze around you
As trees stand in a forest, brave youths, a hundred thousand
An order they await, ready to pounce, as wolves among the sheep
Old men, and young, from mountains high and open plains.

Gaze mightily, glorious shadows, Michael, Stephen, Corvine
The Romanian nation, your descendants,
With weapons in their hands, with your Fire burning
"Life in Liberty or Death", all shout together.

You were vanquished by the evils of envy
By the blind disunity at the Milcov and Carpathians
But we, our Spirit touched by saintly Liberty,
Swear allegiance, to be forever Brothers.

A widowed mother from the time of Michael the Great
Asks of her sons a helping hand today
And curses, with tears in her eyes, whosoever
In times of such great danger, proves to be a traitor.

May lightning bolts, thunder and brimstone kill
Whoever retreats from the glorious battle
When motherland or mother, with a tender heart,
Will ask us to pass through sword and flame.

Is not enough the yatagan of the barbaric crescent
Whose fatal wounds we feel burning today?
Now, the knout intrudes on our ancestral lands,
But with God as witness, we will fight it to the Death

Is not enough the despotism and its unseeing eye
Which for centuries enslaved us, as cattle?
Now, attempt the cruel, in their blind haughtiness,
To steal our Language, but we will fight them to the Death

Romanians of the four corners, now or never,
Be United in your Thoughts, United in your Feelings
Shout out to the world the the Danube is stolen
Through intrigue and coercion, malicious plots.

Priests, with the Cross before you, as the army is Christian,
The motto is Liberty and its goal eternal
Better dead in battle, in full glory
Than be enslaved again in our ancestral homeland.

We offer free images of the Romania Flag in four sizes (small, medium, large, and high resolution). These images are distributed royalty free for both personal and educational use and are ideal for use in projects and on websites. If you choose to use one of our images, attribution is appreciated, but not required.

The following html code snippets can be copied and pasted to add an image of the Romania Flag to your website: