We carry authentic Mozambique Flags in both indoor and outdoor varieties. Our flags are proudly made in the United States from durable nylon and are printed with vibrant long-lasting inks. The Mozambique national flag is often displayed at embassies, outside of businesses associated with Mozambique, and at the homes of people who take great pride in their Mozambique heritage.

Our indoor flags are finished with a pole hem and your choice of with or without golden fringe. Gold fringe is the traditional way to display an indoor flag, however, some people choose without fringe for a simple and clean look that is also less expensive. If you are looking for a complete indoor presentation set, our Build Your Own Indoor International Flag Set program allows you to select a durable nylon indoor Mozambique Flag and choose between premium quality poles, bases, and ornaments, and tassel. For indoor applications, most buyers choose a 3ft. x 5ft. flag with an 8ft. pole, however, if you have a low ceiling, you may opt for a 7ft. pole, which is designed to work with drop ceilings. If you are looking for a very substantial international flag display, our 4ft. x 6ft. indoor flags can be paired with a 9ft. pole for our largest indoor display option.

Our outdoor international flags are finished with a canvas header and brass grommets and are offered in four sizes: 2ft. x 3ft., 3ft. x 5ft., 4ft. x 6ft., and 5ft. x 8ft., to fit any sized flagpole. Typically, outdoor flags are flown outside of government organizations, businesses, and institutions on in-ground and wall-mount flagpoles, however, some people also buy these flags to display their international pride at home. If you are looking for a wall-mount Mozambique flag set to display outside of your home, our Build Your Own Outdoor International Flag Set program will allow you to choose between premium quality 6ft. poles and brackets to display the Mozambique Flag on your front porch. Outdoor flags can also be displayed indoors on interior walls of your home with screws anchored in the wall to attach to the grommets. 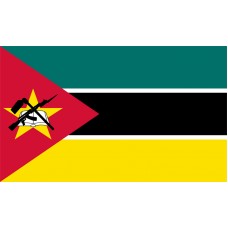 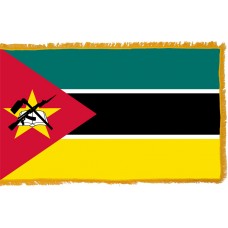 History of the Mozambique Flag

The Mozambique Flag features three horizontal bands in the colors of green, black, and yellow. The black band in the middle is bordered by a thin white stripe. To the left of the flag, is a red triangle pointing to the center of the flag and it features a yellow 5-pointed star that has an AK-47 rifle with the bayonet attached to it crossed by a hoe on top of an open book. The diagram of the rifle crossed over the hoe on the open book is part of Mozambique's coat of arms. The green color on the Mozambique flag represents the country’s agriculture and greenery. The black color represents the African continent and the yellow color represents the minerals of Mozambique. The thin white stripe border is a symbol of peace.

The color red represents the struggles and battles fought for independence. The rifle is symbolic of the country's "defense and vigilance" and the hoe is a symbol of Mozambique's agriculture. The open book represents the importance of education and the star is symbolic of Marxism and Internationalism. The Mozambique flag was adopted on May 1st, 1983 and is based on the flag of FRELIMO (The Front for the Liberation of Mozambique). This was the organization that started the country's protest for independence. The flag was almost the same, except it did not feature the country's coat of arms on it. The Mozambique flag is the only flag in the world that has an illustration of a modern weapon, and there is still a debate today that surrounds it as many people feel that it signifies and encourages violence and war and would prefer that the weapon was removed from it.

Mozambique is located in Southeastern Africa that shares borders with Tanzania, Malawi, Zambia, Zimbabwe, Swaziland, South Africa, and the Indian Ocean. The capital city and largest city is called Maputa. Mozambique is considered to be one of the poorest countries in the world, yet tourism is gradually increasing as it is home to many beautiful sites that are on the UNESCO world heritage list, such as "The Island Of Mozambique" which is the most popular tourist destination and is a city famous for its history as it used to be a Portuguese trading-post as well as being famous for its beaches. Another popular attraction is the "Chapel of Nossa Senhora De Baluarte" which is a chapel that was built in 1522 by the Portuguese and is one of the oldest European buildings. Mozambique is also home to the "Gorongosa National Park" which is thought of as "The place where Noah parked his ark" and often referred to as "Serengeti of the South." Gorongosa literally translates as "Place of Danger" and the park used to be home to a wide variation of dangerous animals, which included, elephants, buffalos, and lions. During the war, the majority of the wildlife in this park, was lost.

In the memory of Africa and the World
Beautiful fatherland of those that dared to fight
Mozambique, your name is freedom
The Sun of June forever will shine

Mozambique, our Glorious Land
Rock by rock constructing the new day
Millions of arms in one only force
O Loved fatherland we will be successful

Flowers sprouting of the soil of your sweat
For mounts, the rivers, the sea
We swear for you, O Mozambique
No tyrant in will enslave us

We offer free images of the Mozambique Flag in four sizes (small, medium, large, and high resolution). These images are distributed royalty free for both personal and educational use and are ideal for use in projects and on websites. If you choose to use one of our images, attribution is appreciated, but not required.

The following html code snippets can be copied and pasted to add an image of the Mozambique Flag to your website: