We carry authentic Israeli Flags in both indoor and outdoor varieties, both of which are proudly made in the United States from durable nylon. Our indoor flags are finished with a pole hem and your choice of with or without golden fringe, whereas our outdoor flags are finished with a canvas header and brass grommets. Gold Fringe is the traditional way to display an indoor flag, however, some congregations choose without fringe for a more streamlined look that is also less expensive.

Many Synagogues and Temples display an indoor flag presentation set on the stage of their congregation. If you are looking to purchase an indoor flag set, our Build Your Own Indoor Religious Flag Set program will allow you to select a durable nylon indoor Israel Flag and choose between premium quality poles, bases, and ornaments, and tassel. We also carry Indoor Israel Flags if you are simply looking to replace the flag on your existing indoor presentation hardware.

Some Synagogues also display the Israeli flag outdoors in front of the congregation on an in-ground or wall-mount pole. If you are looking for a replacement flag to fly outdoors, our durable nylon outdoor flags will be the right option. Likewise, if you are looking to purchase outdoor flagpoles or hardware, we can assist with that as well.

If Judiasm is an important part of your identity or if Israel holds a special place in your heart and you are looking to display the Israel flag outside your home, our Build Your Own Outdoor Religious Flag Set program will allow you to choose between premium quality 6ft. poles and brackets to display the Israel Flag on your front porch. 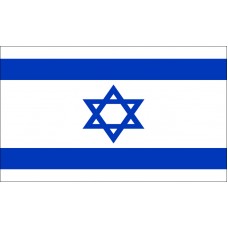 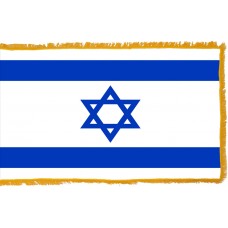 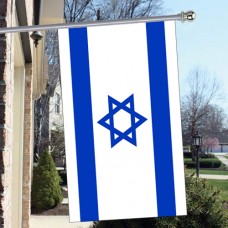 History of the Israel Flag

The Israel flag features a white background with two thick blue horizontal stripes. The stripes are offset slightly from the top and bottom of the flag and are designed to be representative of the Tallit, which is a Jewish prayer shawl made from wool, cotton or synthetic fabrics and is often worn in Judaism while praying. The center of the flag features a blue Star of David, an important and widely recognized symbol of Judiasm and Jewish Identity which is comprised of two equilateral triangles to form a six-point star. The blue color represents glory and purity, while the white color stands for "Divine Benevolence." The Israel flag was adopted on October 28th, 1948 after the country became the "State of Israel."

On May 14, 1948, the final day of the British Mandate, Zionist David Ben-Gurion, who would also serve as the first prime minister of the country, declared independence for a newly formed Jewish State called Israel. This proclamation was the impetus that began the First Arab-Israeli War, which was fought over control of what was previously British Palestine. The outcome of the war was Israeli victory, whereby Israel gained control over about 75% the land previously ruled by the British Mandate. As a result of the war, over 700,000 Palestinians were displaced from their homes and became refugees, while the same number of Jewish people moved to the newly independent Jewish State. Israel was founded to serve as a sanctuary of inclusiveness, especially for displaced and Persecuted Jews who were seeking a refuge where they could live free lives after the Holocaust. The country is designed to be a haven of politically equality for all people, regardless of religion or race.

Israel is located in Southwestern Asia and shares borders with Lebanon, Palestine, Jordan, Syria, Egypt, and the Dead Sea. The capital of Israel is Jerusalem which is also the largest city; The second largest city is Tel Aviv.

Jerusalem is one of the oldest and most visited cities in the world. The city, which is is divided into four quadrants: the Muslim Quarter, Christian Quarter, Armenian Quarter, and the Jewish Quarter, attracts around 3.5 million tourists each year. Religious tourism, especially, is a critical component of Israel's economy. Visitors are drawn to the countries moderate climate, and important historical biblical sites. The main attraction of Jerusalem is "Old City," which features a walled area located in the modern city of Jerusalem. The Old city is home to beautiful and historic monuments including, "Temple Mount" and the "Wailing Wall." Temple Mount, located in Jerusalem is considered to be one of the Holiest sanctuaries in the world. This religious site attracts visitors from the Jewish, Christian, and Muslim faiths, all of whom are moved to visit the site where Abraham is purported to have put forth his son as a sacrificial offering to God. The Wailing Wall, located in Old City Jerusalem, is the remnants of what was Jerusalem's first synagogue and is considered the holiest site in Jerusalem, where Jewish people travel in a pilgrimage as a spiritual and religious experience.

The Israeli Flag is flown, both as a representation of the nation of Israel and as a symbol of Judiasm. This flag is commonly seen at Jewish Synagogues, temples, schools, and community centers around the world.

As long as the Jewish spirit is yearning
deep in the heart,

With eyes turned toward the East,
looking toward Zion,

Then our hope - the two-thousand-
year-old hope - will not be lost:

To be a free people in our land,

The land of Zion and Jerusalem.

We offer free images of the Israel Flag in four sizes (small, medium, large, and high resolution). These images are distributed royalty free for both personal and educational use and are ideal for use in projects and on websites. If you choose to use one of our images, attribution is appreciated, but not required.

The following html code snippets can be copied and pasted to add an image of the Israel Flag to your website: