We carry authentic St Kitts-Nevis Flags in both indoor and outdoor varieties. Our flags are proudly made in the United States from durable nylon and are printed with vibrant long-lasting inks. The St Kitts-Nevis national flag is often displayed at embassies, outside of businesses associated with St Kitts-Nevis, and at the homes of people who take great pride in their St Kitts-Nevis heritage.

Our indoor flags are finished with a pole hem and your choice of with or without golden fringe. Gold fringe is the traditional way to display an indoor flag, however, some people choose without fringe for a simple and clean look that is also less expensive. If you are looking for a complete indoor presentation set, our Build Your Own Indoor International Flag Set program allows you to select a durable nylon indoor St Kitts-Nevis Flag and choose between premium quality poles, bases, and ornaments, and tassel. For indoor applications, most buyers choose a 3ft. x 5ft. flag with an 8ft. pole, however, if you have a low ceiling, you may opt for a 7ft. pole, which is designed to work with drop ceilings. If you are looking for a very substantial international flag display, our 4ft. x 6ft. indoor flags can be paired with a 9ft. pole for our largest indoor display option.

Our outdoor international flags are finished with a canvas header and brass grommets and are offered in four sizes: 2ft. x 3ft., 3ft. x 5ft., 4ft. x 6ft., and 5ft. x 8ft., to fit any sized flagpole. Typically, outdoor flags are flown outside of government organizations, businesses, and institutions on in-ground and wall-mount flagpoles, however, some people also buy these flags to display their international pride at home. If you are looking for a wall-mount St Kitts-Nevis flag set to display outside of your home, our Build Your Own Outdoor International Flag Set program will allow you to choose between premium quality 6ft. poles and brackets to display the St Kitts-Nevis Flag on your front porch. Outdoor flags can also be displayed indoors on interior walls of your home with screws anchored in the wall to attach to the grommets. 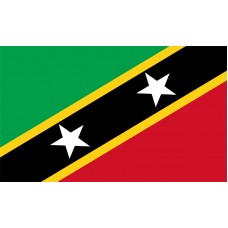 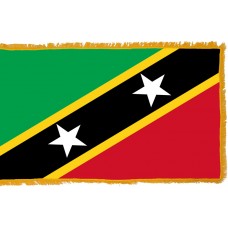 History of the St. Kitts and Nevis Flag

St. Kitts and Nevis is a dual-island nation (St. Kitts is larger than Nevis) that is located in the Caribbean Sea. Both the islands that form the nation were formed by volcanoes. The capital is called Basseterre (which translates as lower ground) and is one of the oldest towns in the Caribbean, which was founded in 1627. St Kitts and Nevis is also known as "Sugar City" as it was known throughout the years as being a sugar-cane island.

St. Kitts and Nevis is a country that has been under the control from the British for many years, but it was first inhabited by Kalinago (carib) Indians and was called ‘Liamuiga’ which translates as "fertile land." In 1623, the British settled on St. Kitts and in 1628, they settled on Nevis. In 1627, the French settled on St. Kitts and rivalry between the French and the British began and continued for over 100 years. In 1782, following the British victory over the French at Brimstone Hill, Britain gained full control of the islands until they gained independence in 1983. St Kitts and Nevis is thought to be the oldest colonized territories in the Caribbean. Saint Kitts is sometimes referred to as "The Mother colony of the West Indies" as it was the home of the first British and French colonies within the Caribbean.

St Kitts and Nevis economy and income is mainly from agriculture and tourism. It is a very popular destination to visit due to the history that the country contains. The most famous attraction is the "Brimstone Hill Fortress," which was built in 1690 by African slaves. It was initially built to protect St. Kitts. The Sugar Train is another popular attraction. It was originally built between 1912-1926 and was built with the intention of using it to transport the sugar from plantations to the factory. Today, it is used as a passenger train to explore some of the island.

O Land of Beauty!
Our country where peace abounds,
Thy children stand free
On the strength of will and love.
With God in all our struggles,
St. Kitts and Nevis be
A nation bound together,
With a common destiny.

As stalwarts we stand
For justice and liberty.
With wisdom and truth
We will serve and honour thee.
No sword nor spear can conquer
For God will sure defend.
His blessings shall forever
To posterity extend.

We offer free images of the St Kitts-Nevis Flag in four sizes (small, medium, large, and high resolution). These images are distributed royalty free for both personal and educational use and are ideal for use in projects and on websites. If you choose to use one of our images, attribution is appreciated, but not required.

The following html code snippets can be copied and pasted to add an image of the St Kitts-Nevis Flag to your website: