We carry authentic Antigua & Barbuda Flags in both indoor and outdoor varieties. Our flags are proudly made in the United States from durable nylon and are printed with vibrant long-lasting inks. The Antigua & Barbuda national flag is often displayed at embassies, outside of businesses associated with Antigua & Barbuda, and at the homes of people who take great pride in their Antigua & Barbuda heritage.

Our indoor flags are finished with a pole hem and your choice of with or without golden fringe. Gold fringe is the traditional way to display an indoor flag, however, some people choose without fringe for a simple and clean look that is also less expensive. If you are looking for a complete indoor presentation set, our Build Your Own Indoor International Flag Set program allows you to select a durable nylon indoor Antigua & Barbuda Flag and choose between premium quality poles, bases, and ornaments, and tassel. For indoor applications, most buyers choose a 3ft. x 5ft. flag with an 8ft. pole, however, if you have a low ceiling, you may opt for a 7ft. pole, which is designed to work with drop ceilings. If you are looking for a very substantial international flag display, our 4ft. x 6ft. indoor flags can be paired with a 9ft. pole for our largest indoor display option.

Our outdoor international flags are finished with a canvas header and brass grommets and are offered in four sizes: 2ft. x 3ft., 3ft. x 5ft., 4ft. x 6ft., and 5ft. x 8ft., to fit any sized flagpole. Typically, outdoor flags are flown outside of government organizations, businesses, and institutions on in-ground and wall-mount flagpoles, however, some people also buy these flags to display their international pride at home. If you are looking for a wall-mount Antigua & Barbuda flag set to display outside of your home, our Build Your Own Outdoor International Flag Set program will allow you to choose between premium quality 6ft. poles and brackets to display the Antigua & Barbuda Flag on your front porch. Outdoor flags can also be displayed indoors on interior walls of your home with screws anchored in the wall to attach to the grommets. 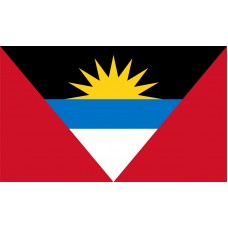 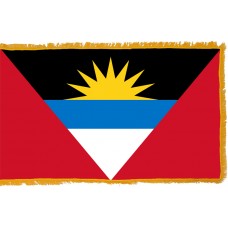 History of the Antigua and Barbuda Flag

The Antigua and Barbuda Flag features a red background with a large triangle pointing downwards that resembles the shape of a "V." Inside the triangle (the "V" shape), there are three horizontal sections: black, blue, and white. The black section features a 7-point golden sun.

The color red symbolizes the passion and energy of the people of Antigua as well as slavery, the color blue is used to represent hope, black represents the soil and African ancestry, and the seven-point sun illustrates the 6 parishes of Antigua and its sister-land, Barbuda. Additionally, the sun represents the "dawn of a new era." The blue, white and yellow colors in the triangle are used to represent the sun, sea, and sand of the islands and the "V" symbolizes victory.

Following the islands' independence and achievement of self-government in association with Britain, on February 27th, 1967, a contest was held to create the design for the new national flag. Reginald Samuel, an artist, sculptor, painter, and teacher, from Antigua, created the winning design. Samuel's design pays homage to the history of the island and also represents his vision for the country's future.

Antigua and Barbuda is comprised of two islands on the Caribbean Sea that were formerly part of the British colony between 1632-1981. They are the sunniest of the Caribbean Islands, with warm weather all year round. Unfortunately, they have been prone to hurricanes in recent years. Due to the very low rainfall, only 3 streams are present in the country and there are no rivers. Antigua's name was coined by Christopher Columbus after the "Church of Santa Maria de la Antigua," in Spain.

The first inhabitants of the islands were natives called the Arawak which means, "Stone People." These native people were known for their beautifully crafted stone and shell tools. Shortly before becoming part of the British colony, Antigua and Barbuda was occupied by West Indies tribes. When the islands came under British rule and more British people and Africans arrived on the islands, the first sugar estate was settled in 1674 and slavery was introduced. Slavery was later abolished, over one hundred years later, in 1834. On November 11, 1981, both islands unified and achieved independence. Queen Elizabeth II is the head of state and the country is also a member of the commonwealth.

Despite being such a small set of islands, the country attracts many visitors. In fact, tourism contributes to over half of the economy with over 700,000 tourists visiting the neation each year. The country is commonly referred to as the "Land of 365 beaches," due to the abundance of luxurious beaches. On the Southwest Coast of Barbuda, one of the most famous attractions is a pink sand beach. The uniquely colored sand is the result of crushed coral.

Other attractions include Devil's Bridge (a bridge that was carved by sea water, forming a rock arch) and Mt. Obama as well as all many other beaches, lagoons and harbors that encompass the islands. A popular event that occurs in the country each year is the regatta at Nelson's Dockyard which is one of the top regattas in the world.

Fair Antigua and Barbuda We thy sons and daughters stand Strong and firm in peace or danger, To safeguard our native land: Wecommit oursleves to building A true nation, brave and free! Ever striving, ever seeking Dwell in love and unity.

Raise the standard! Raise it boldly! Answer now to duty call: To the service of your country, Sparing nothing giving all! Gird your loins and join the battle Gainst fear hate and poverty: Each endeavouring, all achieving, Live in peace where man is free!

God of nations, let thy blessing Fall upon this land ours Rain and sunshine ever sending Fill her fields with crops and flowers: We, her children do implore thee: Give us strength, faith, loyalty: Never failing, all enduring To defend her liberty.

We offer free images of the Antigua & Barbuda Flag in four sizes (small, medium, large, and high resolution). These images are distributed royalty free for both personal and educational use and are ideal for use in projects and on websites. If you choose to use one of our images, attribution is appreciated, but not required.

The following html code snippets can be copied and pasted to add an image of the Antigua & Barbuda Flag to your website: