We carry authentic Australia Flags in both indoor and outdoor varieties. Our flags are proudly made in the United States from durable nylon and are printed with vibrant long-lasting inks. The Australia national flag is often displayed at embassies, outside of businesses associated with Australia, and at the homes of people who take great pride in their Australia heritage.

Our indoor flags are finished with a pole hem and your choice of with or without golden fringe. Gold fringe is the traditional way to display an indoor flag, however, some people choose without fringe for a simple and clean look that is also less expensive. If you are looking for a complete indoor presentation set, our Build Your Own Indoor International Flag Set program allows you to select a durable nylon indoor Australia Flag and choose between premium quality poles, bases, and ornaments, and tassel. For indoor applications, most buyers choose a 3ft. x 5ft. flag with an 8ft. pole, however, if you have a low ceiling, you may opt for a 7ft. pole, which is designed to work with drop ceilings. If you are looking for a very substantial international flag display, our 4ft. x 6ft. indoor flags can be paired with a 9ft. pole for our largest indoor display option.

Our outdoor international flags are finished with a canvas header and brass grommets and are offered in four sizes: 2ft. x 3ft., 3ft. x 5ft., 4ft. x 6ft., and 5ft. x 8ft., to fit any sized flagpole. Typically, outdoor flags are flown outside of government organizations, businesses, and institutions on in-ground and wall-mount flagpoles, however, some people also buy these flags to display their international pride at home. If you are looking for a wall-mount Australia flag set to display outside of your home, our Build Your Own Outdoor International Flag Set program will allow you to choose between premium quality 6ft. poles and brackets to display the Australia Flag on your front porch. Outdoor flags can also be displayed indoors on interior walls of your home with screws anchored in the wall to attach to the grommets. 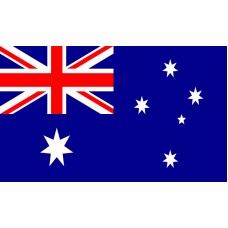 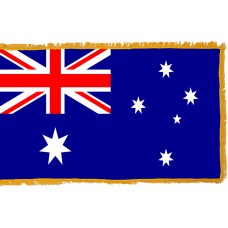 History of the Australian Flag

The Australian flag features a blue background with the Union Jack emblazoned in the top left corner. The bottom left corner features a 7-pointed star and in the middle of the flag are five small white stars. The Union Jack on the flag represents Australia's connection with Great Britain, the 7-pointed star symbolizes the 6 states plus the seventh star represents Australia's territories., and the five stars are a reference to the Southern Cross constellation, which can only be seen in Australia.

Australia which is nicknamed the "island continent" is the 6th largest country in the world and the only continent-nation that it is fully surrounded by the ocean. It officially became a country on January 1st, 1901, when the six British colonies of Queensland, Victoria, New South Wales, South Australia, Western Australia and Tasmania united to form the "Commonwealth of Australia." The process, whereby the six colonies united to form Australia is known as the "Federation of Australia." Before the commonwealth was formed, the British Flag was flown in Australia and the Queen of England was the head of state.

Following the Federation, the commonwealth government held a competition to design Australia's national flag with a prize of $200. Five people were deemed winners of the competition, as they all submitted designs which were almost identical. The Australian flag was first flown on September 3rd, 1901, in Melbourne and since then, National Flag Day is celebrated every year on this date. Initially, the "commonwealth star" on the flag only had 6 points to represent the states but in 1908, an extra point was included on the star to also represent the territories. This change did not become official until 1954.

In addition to the national flag, there is an Aboriginal flag, the Royal Australian Navy has its own flag, as do the Royal Australian Air-Force, the Queen of Australia and the Governor-General of Australia. With this in mind, the national flag is still the most important flag in Australia and when it is raised, flown or lowered, proper etiquette is to stand and face the flag in silence. The flag signifies Australian's identity and pride.

There is still debates in Australia regarding the presence of the Union Jack on the flag as many Australians do not feel they should be paying tribute to their historical connections with Great Britain on their national flag. A vote was held in 1999 which resulted in the removal of the union jack being denied.

Australia is one of the wealthiest countries in the world, with a strong tourism industry which makes up much of its economy. It is home to some of amazing attractions (there are 19 listed World Heritage properties) including the Sydney Opera House, the Great Barrier Reef, Fraser Island, Bondi Beach and Kakadu National Park. Tourism has been increasing each year with over 8.7 million visitors in 2017.

Beneath our radiant Southern Cross
We'll toil with hearts and hands;
To make this Commonwealth of ours
Renowned of all the lands;
For those who've come across the seas
We've boundless plains to share;
With courage let us all combine
To Advance Australia Fair.
In joyful strains then let us sing,
Advance Australia Fair.

We offer free images of the Australia Flag in four sizes (small, medium, large, and high resolution). These images are distributed royalty free for both personal and educational use and are ideal for use in projects and on websites. If you choose to use one of our images, attribution is appreciated, but not required.

The following html code snippets can be copied and pasted to add an image of the Australia Flag to your website: