We carry authentic Mali Flags in both indoor and outdoor varieties. Our flags are proudly made in the United States from durable nylon and are printed with vibrant long-lasting inks. The Mali national flag is often displayed at embassies, outside of businesses associated with Mali, and at the homes of people who take great pride in their Mali heritage.

Our indoor flags are finished with a pole hem and your choice of with or without golden fringe. Gold fringe is the traditional way to display an indoor flag, however, some people choose without fringe for a simple and clean look that is also less expensive. If you are looking for a complete indoor presentation set, our Build Your Own Indoor International Flag Set program allows you to select a durable nylon indoor Mali Flag and choose between premium quality poles, bases, and ornaments, and tassel. For indoor applications, most buyers choose a 3ft. x 5ft. flag with an 8ft. pole, however, if you have a low ceiling, you may opt for a 7ft. pole, which is designed to work with drop ceilings. If you are looking for a very substantial international flag display, our 4ft. x 6ft. indoor flags can be paired with a 9ft. pole for our largest indoor display option.

Our outdoor international flags are finished with a canvas header and brass grommets and are offered in four sizes: 2ft. x 3ft., 3ft. x 5ft., 4ft. x 6ft., and 5ft. x 8ft., to fit any sized flagpole. Typically, outdoor flags are flown outside of government organizations, businesses, and institutions on in-ground and wall-mount flagpoles, however, some people also buy these flags to display their international pride at home. If you are looking for a wall-mount Mali flag set to display outside of your home, our Build Your Own Outdoor International Flag Set program will allow you to choose between premium quality 6ft. poles and brackets to display the Mali Flag on your front porch. Outdoor flags can also be displayed indoors on interior walls of your home with screws anchored in the wall to attach to the grommets.

In addition to the flags we offer for purchase, we maintain an archive of the audio and lyrics of the Mali National Anthem, historical information about the Mali flag, demographic data about Mali, and free high resolution images of the Mali flag for use in projects and on websites. 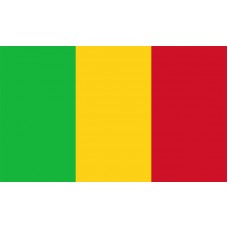 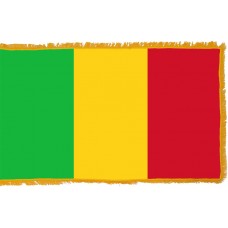 History of the Mali Flag

The Mali Flag consists of three vertical stripes in the colors of green, gold, and red, which are the Pan-African colors. The green color represents fertility and the soil, the gold color represents the mineral wealth of the country, and the red color represents the blood that was lost in the struggle for independence from the French. The current Mali Flag was adopted on March 1st, 1961 but the original flag was adopted on April 4th, 1959 and was the same as the current flag, but the gold stripe had a black human stick figure on it. The Mali flag was influenced by the French tricolor but using the Pan-African colors instead.

Mali is a landlocked country in West Africa that shares borders with Algeria, Burkina Faso, Cote D'Ivoire, Guinea, Senegal, and Mauritania. It is the biggest country in West Africa and the majority of the country is located in the Sahara Desert. The capital of Mali is called Bamako and is one of the fastest-growing cities in Africa. Mali has three natural land zones, which are, the Arid Saharan Zone, the Semiarid Central Sahelian Zone, and the Southern Cultivated Sudanese Zone.

It is in the latter that the majority of the Mali population live. Mali is a country that is divided into 8 large regions and one district, which is the capital, Bamako. The eight regions of the country are, Kayes, Koulikoro, Sikasso, Segow, Gao, Mopti, Kindau, and Tombouktou. Mali is one of the poorest countries in the world and the economy is heavily reliant on agriculture exports (mainly cotton) and gold mining. The country also bears the distinction as the hottest country in the world.

In Ancient History, Mali was part of three empires, which were, the Ghana Empire, the Mali Empire (from which the country's name is derived), and the Songhai Empire. These empires controlled the trans-Saharan trade in Gold and the country was thriving and at its peak during these Empires. In the late 19th Century, France invaded Mali and by 1905, Mali was under complete French control and was part of the French Sudan until 1959 when the French Sudan united with Senegal and became the Mali Federation.

They gained independence on June 20th, 1960. Two months after gaining independence, Senegal left the federation and it became the Independent Republic of Mali on September 22nd, 1960. Following their independence, Mali, as a country grew and progressed as well as becoming a tourist attraction. It was very popular and renowned for its festivals, the main one being the "Festival au Desert." Sadly, due to civil wars and conflicts with the Islamic sectors, Mali is becoming divided and tourism has decreased rapidly (in 2011, approximately 200,000 tourists visited which dropped to 10,000 tourists in 2012) as the majority of hotels closed down.

We offer free images of the Mali Flag in four sizes (small, medium, large, and high resolution). These images are distributed royalty free for both personal and educational use and are ideal for use in projects and on websites. If you choose to use one of our images, attribution is appreciated, but not required.

The following html code snippets can be copied and pasted to add an image of the Mali Flag to your website: