We carry authentic Costa Rica Flags in both indoor and outdoor varieties. Our flags are proudly made in the United States from durable nylon and are printed with vibrant long-lasting inks. The Costa Rica national flag is often displayed at embassies, outside of businesses associated with Costa Rica, and at the homes of people who take great pride in their Costa Rican heritage.

Our indoor flags are finished with a pole hem and your choice of with or without golden fringe. Gold fringe is the traditional way to display an indoor flag, however, some people choose without fringe for a simple and clean look that is also less expensive. If you are looking for a complete indoor presentation set, our Build Your Own Indoor International Flag Set program allows you to select a durable nylon indoor Costa Rica Flag and choose between premium quality poles, bases, and ornaments, and tassel. For indoor applications, most buyers choose a 3ft. x 5ft. flag with an 8ft. pole, however, if you have a low ceiling, you may opt for a 7ft. pole, which is designed to work with drop ceilings. If you are looking for a very substantial international flag display, our 4ft. x 6ft. indoor flags can be paired with a 9ft. pole for our largest indoor display option.

Our outdoor international flags are finished with a canvas header and brass grommets and are offered in four sizes: 2ft. x 3ft., 3ft. x 5ft., 4ft. x 6ft., and 5ft. x 8ft., to fit any sized flagpole. Typically, outdoor flags are flown outside of government organizations, businesses, and institutions on in-ground and wall-mount flagpoles, however, some people also buy these flags to display their international pride at home. If you are looking for a wall-mount Costa Rica flag set to display outside of your home, our Build Your Own Outdoor International Flag Set program will allow you to choose between premium quality 6ft. poles and brackets to display the Costa Rica Flag on your front porch. Outdoor flags can also be displayed indoors on interior walls of your home with screws anchored in the wall to attach to the grommets. 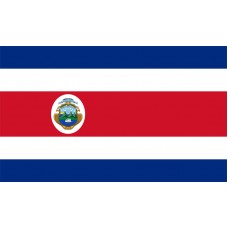 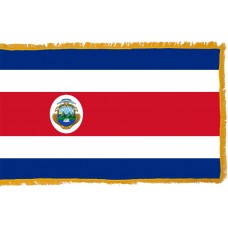 History of the Costa Rican Flag

The Costa Rica Flag features a design of five alternating stripes of blue, white, and red. The top and bottom stripe are blue, followed by white and the central stripe is red. The red stripe is twice the thickness of the other stripes and features the coat of arms in the center. The flag was designed in 1848 by Pacifica Fernandez Oreamuno, who, at the time, was the President's wife. The design is referred to as the "Bandera Nacional," and was adopted as the nation's flag on September 29th, 1848. The design was likely inspired by the French Tricolor, following the French Revolution.

The white color represents Peace, happiness and wisdom as well as the independence and freedom from Spain. The blue color represents the sky opportunity. The red color represents the blood lost for independence as well as the kindness of the natives. The coat of arms that is featured in the center of the flag is comprised of 3 volcanoes, which represent Cordillera Guanacaste, Cordillera Volcanica Central, and Cordillera Talamanca. Two merchant ships are navigating the seas on either side of the mountains, representing the Pacific and Atlantic Oceans. The sun in the top left-hand corner represents the beginning of Costa Rica as a new nation. Each side of the coat of arms features gold beans which represent coffee beans which are prevalent in the country, and the 7 stars at the top symbolize the 7 provinces, which are, San Jose, Cartago, Alajuera, Heredia, Limon, Puntarenas, and Guanacaste. Since 1848, the Costa Rica flag has been updated 3 times and since 1821 it has changed 10 times.

Costa Rica was a colony under the rule of Spain for over 250 years from 1561–1821, when they declared their independence. Costa Rica didn't actually fight for independence, but it was granted on September 15th, 1821 following the Mexican War of Independence when Spain was defeated and the authorities in Guatemala declared independence for all the countries in Central America. September is a very important month in Costa Rica as their independence is widely celebrated. Every September 14th, there is a lantern parade, that pays tribute to Dolores Bedoya, who took people with her to the Guatemala government office to influence them to sign the independence declaration. That evening, lanterns were carried by all to guide the way.

Costa Rica, which translates as "Rich Coast," is a country in Central America that shares borders with Nicaragua, Panama, the Caribbean Sea and the Pacific Ocean. The capital and largest city of Costa Rica is San Jose, which is located in the mid-west region of the Central Valley. The country is also known as "The Switzerland of Latin America," due to the natural beauty and political stability. It was known as the "Rich Coast" following Christopher Columbus's visit in 1502, when he witnessed the majority of the natives wearing vast amounts of gold jewelery.

Costa Rica is home to 14 volcanoes, 6 of which are still active. One quarter of the country consists of national parks and refuges making it a great wildlife attraction, which is the main reason that it is the most popular tourist destination in Central America.

Noble homeland, your beautiful flag
Expression of your life it gives us:
Under the limpid blue of your skies,
Peace reigns, white and pure.

Hail, gentle country!
Hail, loving mother!
If anyone should attempt to besmirch your glory,
You will see your people, valiant and virile,
Exchange their rustic tools for weapons.

Hail, O homeland! Your prodigal soil
Gives us sweet sustenance and shelter.
Under the limpid blue of your sky,
May peace and labour ever live!

We offer free images of the Costa Rica Flag in four sizes (small, medium, large, and high resolution). These images are distributed royalty free for both personal and educational use and are ideal for use in projects and on websites. If you choose to use one of our images, attribution is appreciated, but not required.

The following html code snippets can be copied and pasted to add an image of the Costa Rica Flag to your website: