We carry authentic Benin Flags in both indoor and outdoor varieties. Our flags are proudly made in the United States from durable nylon and are printed with vibrant long-lasting inks. The Benin national flag is often displayed at embassies, outside of businesses associated with Benin, and at the homes of people who take great pride in their Benin heritage.

Our indoor flags are finished with a pole hem and your choice of with or without golden fringe. Gold fringe is the traditional way to display an indoor flag, however, some people choose without fringe for a simple and clean look that is also less expensive. If you are looking for a complete indoor presentation set, our Build Your Own Indoor International Flag Set program allows you to select a durable nylon indoor Benin Flag and choose between premium quality poles, bases, and ornaments, and tassel. For indoor applications, most buyers choose a 3ft. x 5ft. flag with an 8ft. pole, however, if you have a low ceiling, you may opt for a 7ft. pole, which is designed to work with drop ceilings. If you are looking for a very substantial international flag display, our 4ft. x 6ft. indoor flags can be paired with a 9ft. pole for our largest indoor display option.

Our outdoor international flags are finished with a canvas header and brass grommets and are offered in four sizes: 2ft. x 3ft., 3ft. x 5ft., 4ft. x 6ft., and 5ft. x 8ft., to fit any sized flagpole. Typically, outdoor flags are flown outside of government organizations, businesses, and institutions on in-ground and wall-mount flagpoles, however, some people also buy these flags to display their international pride at home. If you are looking for a wall-mount Benin flag set to display outside of your home, our Build Your Own Outdoor International Flag Set program will allow you to choose between premium quality 6ft. poles and brackets to display the Benin Flag on your front porch. Outdoor flags can also be displayed indoors on interior walls of your home with screws anchored in the wall to attach to the grommets.

In addition to the flags we offer for purchase, we maintain an archive of the audio and lyrics of the Benin National Anthem, historical information about the Benin flag, demographic data about Benin, and free high resolution images of the Benin flag for use in projects and on websites. 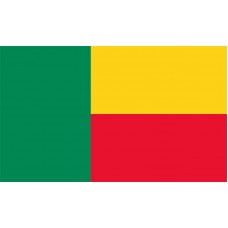 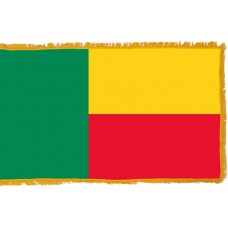 History of the Benin Flag

Due to the frequently-changing political climate in Benin, the National Flag of Benin has seen many changes over the years. The current flag design was first adopted on November 16th, 1959 when the country gained independence as the Republic of Dahomey in 1960. In 1975, new leadership emerged who changed the countries name to People's Republic of Benin and changed the flag to a green flag with a red star in the upper left corner. In 1990, a revolution took place which toppled the leadership and restored the flag to its prior design.

The red-colored rectangle of the Benin flag signifies the soil or the blood of the ancestors, the yellow color represents the savannas, and the green color is representative of palm trees. The current Benin flag is most accurately attributed to The People's Republic of Benin which was formed as a multi-party democracy in 1991. The country retained the name of "Benin" which refers to an ancient African Empire that existed in the area.

Situated in West Africa, Benin shares borders with Togo, Burkina Faso, Niger, and Nigeria. Citizens of the country are known as "Beninese." Benin is well known as having a long history associated with the slave trade. In fact, the southern coast of the country earned the dubious distinction as the, "Slave Coast;" This coast line forms a part of the Gulf of Guinea at the most northerly tropical part of the Atlantic.

Between 1900 and 1958, the area was part of a French colony. Benin is credited with being the first country to shift from dictatorship to democracy in the 1990's. The region initially suffered from several bouts of political instability including multiple military coups and dictatorship.

The main export from Benin is cotton which contributes towards what little economic growth the region has enjoyed in recent years. This is set against a poor infrastructure and a political and public system that continues to suffer from corruption. The country has a large population and there are often tension points along its border with Burkina Faso concerning land disputes between rival communities.

French is the country's official language but over half of the population speaks African dialects that include Bariba, Yoruba, Mina, and Dendi. English is also taught to secondary school students along with French as the countries two secondary languages.

Previously exiled Patrice Talon returned to Benin in 2015 following a pardon in 2014 and was elected as the country's president in March of 2016. With political corruption and sporadic unrest in Benin, it is difficult to ascertain the true state of the country. Several newspapers have been suspended and journalists are not warmly welcomed in Benin.

The capital city of Benin, Porto Novo is the home of the country's airport and the main port city. The landscape is tropical and features palm trees and the savannas as depicted on the Benin flag.

The Dawn of a New Day (L'Aube Nouvelle)

Formerly, at her call, our ancestors
Knew how to engage in mighty battles
With strength, courage, ardour, and full of joy, but at the price of blood.
Builders of present, you too, join forces
Each day for the task stronger in unity.
Build without ceasing for posterity.

When all around there blows a wind of anger and hate:
Citizen of Benin be proud, and in a calm spirit
Trusting in the future, behold your flag!
In the green you read hope of spring;
The red signifies the courage of your ancestors;
The yellow foretells the greatest treasures.

Beloved Benin, your sunny mountains, palm trees, and green pastures
Show everywhere your brightness;
Your soil offers everyone the richest fruits.
Benin, from henceforth your sons are united
With one brotherly spirit sharing the hope of seeing you
Enjoy abundance and happiness forever.

We offer free images of the Benin Flag in four sizes (small, medium, large, and high resolution). These images are distributed royalty free for both personal and educational use and are ideal for use in projects and on websites. If you choose to use one of our images, attribution is appreciated, but not required.

The following html code snippets can be copied and pasted to add an image of the Benin Flag to your website: