We carry authentic Poland Flags in both indoor and outdoor varieties. Our flags are proudly made in the United States from durable nylon and are printed with vibrant long-lasting inks. The Poland national flag is often displayed at embassies, outside of businesses associated with Poland, and at the homes of people who take great pride in their Polish heritage.

Our indoor flags are finished with a pole hem and your choice of with or without golden fringe. Gold fringe is the traditional way to display an indoor flag, however, some people choose without fringe for a simple and clean look that is also less expensive. If you are looking for a complete indoor presentation set, our Build Your Own Indoor International Flag Set program allows you to select a durable nylon indoor Poland Flag and choose between premium quality poles, bases, and ornaments, and tassel. For indoor applications, most buyers choose a 3ft. x 5ft. flag with an 8ft. pole, however, if you have a low ceiling, you may opt for a 7ft. pole, which is designed to work with drop ceilings. If you are looking for a very substantial international flag display, our 4ft. x 6ft. indoor flags can be paired with a 9ft. pole for our largest indoor display option.

Our outdoor international flags are finished with a canvas header and brass grommets and are offered in four sizes: 2ft. x 3ft., 3ft. x 5ft., 4ft. x 6ft., and 5ft. x 8ft., to fit any sized flagpole. Typically, outdoor flags are flown outside of government organizations, businesses, and institutions on in-ground and wall-mount flagpoles, however, some people also buy these flags to display their international pride at home. If you are looking for a wall-mount Poland flag set to display outside of your home, our Build Your Own Outdoor International Flag Set program will allow you to choose between premium quality 6ft. poles and brackets to display the Poland Flag on your front porch. Outdoor flags can also be displayed indoors on interior walls of your home with screws anchored in the wall to attach to the grommets.

In addition to the flags we offer for purchase, we maintain an archive of the audio and lyrics of the Poland National Anthem, historical information about the Poland flag, demographic data about Poland, and free high resolution images of the Poland flag for use in projects and on websites. 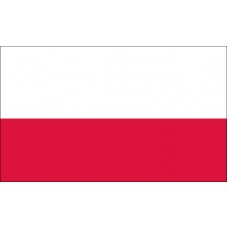 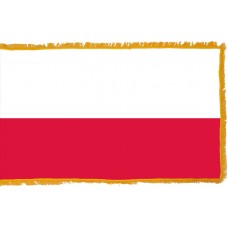 History of the Poland Flag

One of the reasons the red and white colors were made the official colors of the country was in order to pay respect to the soldiers that fought for Poland as those were the colors that they wore on their uniform. The colors were included on the Coat of Arms in the form of a white eagle (the national symbol) and a red shield. The Poland flag was officially adopted on August 1st, 1919.

In 1569, Poland was a thriving country. It formed a union with Lithuania, known as the Poland-Lithuanian commonwealth and it became the largest state in Europe. In 1795, the commonwealth dissolved and, as a result of this, the Polish nation did not have a country for 123 years until they regained independence following WWI, in 1918. On November 11th, 1918 Poland declared independence from Russia and from 1937, Polish Independence Day became a national holiday (though it was forbidden between the years 1939-1989 while it was under a communist government).

In 1921, Poland defeated the Soviet Union in the Polish-Soviet war, that began in 1919, still maintaining their independence. During WWII, however, Poland once again lost their independence when the USSR and Nazi Germany invaded and occupied Poland. Hitler brought his army to Poland and concentration camps were formed. Despite the invasion, the Polish continued to fight and revolt against the opposition, which resulted in them forming the largest resistance movement in Nazi-occupied Europe.

The Polish saved more Jewish lives during the Holocaust than anywhere else or any other organization. At the end of WWII, Poland became a communist country even though it was under the control of the Soviet Union and dictator Joseph Stalin and finally gained full independence from the Soviet Union in 1991.

Tourism contributes greatly to the country's economy with the most popular cities being Krakow, Warsaw, Gdansk. Tourists visit Poland, mainly for the historic sites, which include the concentration camp formed by Nazi Germany "Auschwitz" located in the town Oswiecim and the Wielickza salt mine, which is thought to be one of the oldest in the world.

Poland Is Not Yet Lost (Mazurek Dabrowskiego)

March, march, Dabrowski
To Poland from Italy
Under thy command
Let us now rejoin the nation

Germans, Muscovites will not rest
When, backsword in hand
"Concord" will be our watchword
And the fatherland will be ours

Father, in tears
Says to his Basia
Just listen, it seems that our people
Are beating the drums

We offer free images of the Poland Flag in four sizes (small, medium, large, and high resolution). These images are distributed royalty free for both personal and educational use and are ideal for use in projects and on websites. If you choose to use one of our images, attribution is appreciated, but not required.

The following html code snippets can be copied and pasted to add an image of the Poland Flag to your website: