We carry authentic Bahrain Flags in both indoor and outdoor varieties. Our flags are proudly made in the United States from durable nylon and are printed with vibrant long-lasting inks. The Bahrain national flag is often displayed at embassies, outside of businesses associated with Bahrain, and at the homes of people who take great pride in their Bahrain heritage.

Our indoor flags are finished with a pole hem and your choice of with or without golden fringe. Gold fringe is the traditional way to display an indoor flag, however, some people choose without fringe for a simple and clean look that is also less expensive. If you are looking for a complete indoor presentation set, our Build Your Own Indoor International Flag Set program allows you to select a durable nylon indoor Bahrain Flag and choose between premium quality poles, bases, and ornaments, and tassel. For indoor applications, most buyers choose a 3ft. x 5ft. flag with an 8ft. pole, however, if you have a low ceiling, you may opt for a 7ft. pole, which is designed to work with drop ceilings. If you are looking for a very substantial international flag display, our 4ft. x 6ft. indoor flags can be paired with a 9ft. pole for our largest indoor display option.

Our outdoor international flags are finished with a canvas header and brass grommets and are offered in four sizes: 2ft. x 3ft., 3ft. x 5ft., 4ft. x 6ft., and 5ft. x 8ft., to fit any sized flagpole. Typically, outdoor flags are flown outside of government organizations, businesses, and institutions on in-ground and wall-mount flagpoles, however, some people also buy these flags to display their international pride at home. If you are looking for a wall-mount Bahrain flag set to display outside of your home, our Build Your Own Outdoor International Flag Set program will allow you to choose between premium quality 6ft. poles and brackets to display the Bahrain Flag on your front porch. Outdoor flags can also be displayed indoors on interior walls of your home with screws anchored in the wall to attach to the grommets.

In addition to the flags we offer for purchase, we maintain an archive of the audio and lyrics of the Bahrain National Anthem, historical information about the Bahrain flag, demographic data about Bahrain, and free high resolution images of the Bahrain flag for use in projects and on websites. 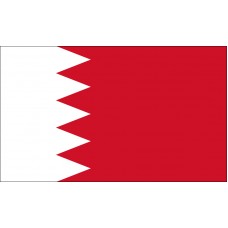 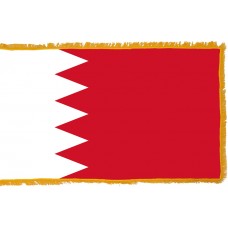 History of the Bahrain Flag

The Bahrain flag features a split design, where the left third is white and the right two thirds is red; The two sides are divided by a serrated line, leaving 5 triangles, which signify the 5 pillars of Islam. The red color is the traditional color used on Arab flags, symbolizing their beliefs and the Kharijite sect of Islam, while the white color represents peace and harmony.

The earliest flags used in Bahrain where solid red, however, in 1820, Bahrain entered into a Maritime Treaty with Great Britian, which was the was the impetus that caused Bahrain to add a white stripe to the flag to differentiate their vessels from commonly used red flags on pirate ships. Originally, the serrated edge was added merely to differentiate between other similar flags; Over the years, the number of points/triangles on the flag has changed several times. Between 1932-1972 the flag had 28 triangles, between 1972-2002, it featured 8 triangles. The current flag with a serrated edge of five triangles was adopted on February 14th, 2002.

Bahrain is a very small island country located between Qatar and Saudi Arabia. Due to its central location on the Persian Gulf, it has been a major target for invasion throughout it's history. From 1783, the Al Khalifa family from the Bani Ubtah Tribe ruled the nation after they re-captured Bahrain from Persia but due to the constant invasions, they had to seek help from the British and in the 1830s, Bahrain became a British Protectorate, when they needed support against the Ottoman Turkey. Bahrain remained a British Protectorate until 1971, when it finally obtained independence from Great Britain. Due to its precarious location, Bahrain tries to remain neutral in foreign affairs.

Despite being the smallest Arabian country, it is one of the quickest developing nations and it was the first amongst the Arab countries to discover petroleum in 1932. The economy in Bahrain is also rapidly developing and the country is also beginning to establish itself as a popular tourist destination, with over 50,000 people visiting the nation each year. The "Mesquite Tree" is a mysterious 400+ year old tree that stands alone in the desert with no known water source and draws many visitors each year to speculate how it may have survived in such an inhospitable location. Another tourist attraction is the "Al Fateh Mosque" which is one of the largest mosques in the world, with a capacity of up to 7,000 people.

The word Bahrain is derived from "Al-Bayran" which translates to "two seas." The two seas refer to the sweet water springs and the salty seas that surround the country. The largest and the Capital City of Bahrain is Manama, which is home to a diverse population over over 150,000 people.

We offer free images of the Bahrain Flag in four sizes (small, medium, large, and high resolution). These images are distributed royalty free for both personal and educational use and are ideal for use in projects and on websites. If you choose to use one of our images, attribution is appreciated, but not required.

The following html code snippets can be copied and pasted to add an image of the Bahrain Flag to your website: