We carry authentic Burkina Faso Flags in both indoor and outdoor varieties. Our flags are proudly made in the United States from durable nylon and are printed with vibrant long-lasting inks. The Burkina Faso national flag is often displayed at embassies, outside of businesses associated with Burkina Faso, and at the homes of people who take great pride in their Burkina Faso heritage.

Our indoor flags are finished with a pole hem and your choice of with or without golden fringe. Gold fringe is the traditional way to display an indoor flag, however, some people choose without fringe for a simple and clean look that is also less expensive. If you are looking for a complete indoor presentation set, our Build Your Own Indoor International Flag Set program allows you to select a durable nylon indoor Burkina Faso Flag and choose between premium quality poles, bases, and ornaments, and tassel. For indoor applications, most buyers choose a 3ft. x 5ft. flag with an 8ft. pole, however, if you have a low ceiling, you may opt for a 7ft. pole, which is designed to work with drop ceilings. If you are looking for a very substantial international flag display, our 4ft. x 6ft. indoor flags can be paired with a 9ft. pole for our largest indoor display option.

Our outdoor international flags are finished with a canvas header and brass grommets and are offered in four sizes: 2ft. x 3ft., 3ft. x 5ft., 4ft. x 6ft., and 5ft. x 8ft., to fit any sized flagpole. Typically, outdoor flags are flown outside of government organizations, businesses, and institutions on in-ground and wall-mount flagpoles, however, some people also buy these flags to display their international pride at home. If you are looking for a wall-mount Burkina Faso flag set to display outside of your home, our Build Your Own Outdoor International Flag Set program will allow you to choose between premium quality 6ft. poles and brackets to display the Burkina Faso Flag on your front porch. Outdoor flags can also be displayed indoors on interior walls of your home with screws anchored in the wall to attach to the grommets. 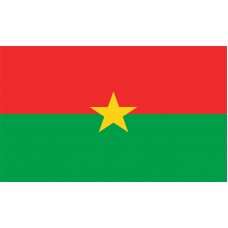 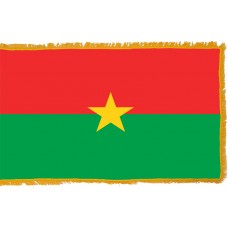 History of the Burkina Faso flag

The Burkina Faso flag features a split design where the top half of the flag has a red background and the bottom half of the flag is adorned with a green background. The central feature of the flag is a yellow, 5-pointed star in the middle. The red color is symbolic for the battles that were fought and the struggle for independence, the green color signifies hope and the vast amount of agriculture within the country, and the yellow star is symbolic of the guiding light of the revolution. The flag is derived from the Ethiopian flag and the colors used are popular pan-African colors. The flag, as a whole and the colors are thought to not only represent the break of the country with its colonial history but also the unity with the other African ex-colonies.

Thousands of years ago, after being first occupied by hunter-gatherers, Burkina Faso was part of the Mossi Empire for over 500 years. Towards the end of the 1800s, Britain, France, and Germany all sought to gain control of the land with France eventually winning and in 1897, Burkina Faso became a French protectorate until 1919. During this period, the French flag was the official flag for Burkina Faso. In 1919, certain regions were divided into a separate colony and Burkina Faso was settled as a self-governing colony with France and was officially known at that time as Upper Volta.

On December 9th, 1959, the Upper Volta flag was adopted. The flag was comprised of 3 horizontal bands with the colors black, white, and red to represent the Black Volta, White Volta and Red Volta seas, which are the three channels of the Volta Rivers. In 1960, Upper Volta gained independence from France and the first president of Upper Volta, Maurice Yameogo was thrust into power. Yameogo is well known for banning all competing political parties. In 1966, after years of many people being unhappy with the government, a military coup occurred which was successful in taking power over the country. In 1983, a new ruler named Thomas Sankara became president and in 1984, he decided to change the name of the country to Burkina Faso, which translates to "Land of Incorruptible Men." At the same time as changing the name of the country, they felt that a new flag should be introduced which is when the Burkina Faso flag used today was officially adopted, on August 4th, 1984.

Burkina Faso is a landlocked country in West Africa. The country shares borders with Mali, Benin, Togo, Ghana, and the Ivory Coast. The largest and capital city in Burkina Faso (also the oldest city on Earth) is Ouagadougou. Burkina Faso is renowned for the strange and original names of its cities, which include Leafy Bobo-Dioulasso, Gorom-Gorom, Bouroum-Bouroum, Tin-Akof, and Rambo.

Burkina is one of the poorest countries in the world, with an economy that is mainly based on agriculture and livestock. Despite being home to many famous and beautiful landmarks, tourism is very limited in the country. The capital city has many attractions including the Cathedral of Ouagadougou. Burkina Faso is also home to the "Mare aux Hippopotamuses" (the Lake of hippopotamuses) which is home to around 100 hippos. The Karfiguela Falls, Lake Tengrela and the Arli National Park which protects the elephant population in Africa are other popular attractions in the country.

Nourished in the lively source of the Revolution,
The volunteers for liberty and peace
With their nocturnal and beneficial energies of the 4th of August
Had not only hand arms, but also and above all
The flame in their hearts lawfully to free
Faso forever from the fetters of those who
Here and there were polluting the sacred soul of independence and sovereignty.

And seated henceforth in rediscovered dignity,
Love and honour partnered with humanity,
The people of Burkina sing a victory hymn
To the glory of the work of liberation and emancipation.
Down with exploitation of man by man!
Forward for the good of every man
By all men of today and tomorrow, by every man here and always!

Popular revolution our nourishing sap.
Undying motherhood of progress in the face of man.
Eternal hearth of agreed democracy,
Where at last national identity has the right of freedom.
Where injustice has lost its place forever,
And where from the hands of builders of a glorious world
Everywhere the harvests of patriotic vows ripen and suns of boundless joy shine.

We offer free images of the Burkina Faso Flag in four sizes (small, medium, large, and high resolution). These images are distributed royalty free for both personal and educational use and are ideal for use in projects and on websites. If you choose to use one of our images, attribution is appreciated, but not required.

The following html code snippets can be copied and pasted to add an image of the Burkina Faso Flag to your website: