We carry authentic South Vietnam Flags in both indoor and outdoor varieties. Our flags are proudly made in the United States from durable nylon and are printed with vibrant long-lasting inks. The South Vietnam national flag is often displayed at embassies, outside of businesses associated with South Vietnam, and at the homes of people who take great pride in their South Vietnamese heritage.

Our indoor flags are finished with a pole hem and your choice of with or without golden fringe. Gold fringe is the traditional way to display an indoor flag, however, some people choose without fringe for a simple and clean look that is also less expensive. If you are looking for a complete indoor presentation set, our Build Your Own Indoor International Flag Set program allows you to select a durable nylon indoor South Vietnam Flag and choose between premium quality poles, bases, and ornaments, and tassel. For indoor applications, most buyers choose a 3ft. x 5ft. flag with an 8ft. pole, however, if you have a low ceiling, you may opt for a 7ft. pole, which is designed to work with drop ceilings. If you are looking for a very substantial international flag display, our 4ft. x 6ft. indoor flags can be paired with a 9ft. pole for our largest indoor display option.

Our outdoor international flags are finished with a canvas header and brass grommets and are offered in four sizes: 2ft. x 3ft., 3ft. x 5ft., 4ft. x 6ft., and 5ft. x 8ft., to fit any sized flagpole. Typically, outdoor flags are flown outside of government organizations, businesses, and institutions on in-ground and wall-mount flagpoles, however, some people also buy these flags to display their international pride at home. If you are looking for a wall-mount South Vietnam flag set to display outside of your home, our Build Your Own Outdoor International Flag Set program will allow you to choose between premium quality 6ft. poles and brackets to display the South Vietnam Flag on your front porch. Outdoor flags can also be displayed indoors on interior walls of your home with screws anchored in the wall to attach to the grommets. 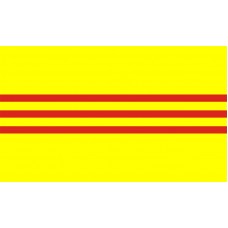 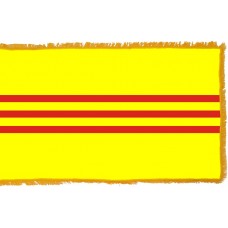 History of the South Vietnam Flag

The South Vietnam flag features a yellow field with three horizontal red lines in the center. There are varied interpretations of what the flag is supposed to represent. The three red horizontal lines are thought by some, to represent the blood that was lost during the struggle for independence. The red lines also represent the symbol for "South" in Daoist trigrams (a group of symbols used to represent something). Another interpretation is that the red lines represent the North, Central, and South Vietnam. The color yellow is a traditional Vietnam color. The South Vietnam flag was officially adopted on 14thJune, 1949 when it was the "State of Vietnam" (when both the North and South were controlled by the French) and still used from 1955 when it became the Republic of Vietnam (South Vietnam) until its collapse in 1975. The state of South Vietnam no longer exists; however, the flag is still used among private citizens in other countries and is often referred to as the "Vietnamese Heritage and Freedom Flag."

South Vietnam was the Southern half of what is now referred to as the "Socialist Republic of Vietnam" and it shared borders with North Vietnam, Laos, Cambodia, Thailand, Philippines, Malaysia, and Indonesia. The capital city of South Vietnam was called Saigon.

In 1859, the French arrived in Vietnam and occupied the city of Saigon, and by 1885, the whole of Vietnam was colonized by the French as well as the bordering countries Laos and Cambodia. It was known as the "French Indochina." In 1945, at the end of WWII, when the Germans had defeated the French, they gave their allies, Japan, control of Vietnam. In 1945, leader Ho Chi Minh (who initially began the independence movement to gain independence from the French Empire), opposed Japan with the support of the Americans. In 1945, the Japanese were driven out of Vietnam and the French, once again, took control. Ho Chi Minh's army (who were known as the Viet Minh) fought for eight years until 1954, when the French were defeated. Following the French's defeat, the 1954 Geneva Conference (a conference of world leaders) decided to divide Vietnam into two separate states with the intentions of uniting them again. North Vietnam was known as the "Communist Democratic of Vietnam" and its capital city was Hanoi and South Vietnam was known as the "Non-communist Republic of Vietnam" and its capital was Saigon.

In South Vietnam, the government was replaced by armed forces and there were people in the South who wanted the South and North to be united. These people were known as the Viet Cong, and they fought against the army of the South, with the support of the Viet Minh (Ho Chi Minh's troops in North Vietnam).

In 1965, the Americans sent troops to South Vietnam to help them to fight against the Viet Cong and Viet Minh, as well as troops from Australia and New Zealand. This war is referred to as the "Vietnam War" even though the Vietnamese people refer to it as the "American War." The war continued for another ten years, despite the Americans dropping bombs and spraying poisonous chemicals to destroy whatever gave shelter and food to the Viet Cong army. In 1972, the Australian army were taken out of Vietnam and in 1974, a ceasefire was signed and all the American fighters were taken out. In 1975, North Vietnam invaded South Vietnam and in April, 1975, South Vietnam surrendered and as a result of this blood war, the South and North joined and became known as the "Socialist Republic of Vietnam."

We offer free images of the South Vietnam Flag in four sizes (small, medium, large, and high resolution). These images are distributed royalty free for both personal and educational use and are ideal for use in projects and on websites. If you choose to use one of our images, attribution is appreciated, but not required.

The following html code snippets can be copied and pasted to add an image of the South Vietnam Flag to your website: