We carry authentic US Virgin Islands Flags in both indoor and outdoor varieties. Our flags are proudly made in the United States from durable nylon and are printed with vibrant long-lasting inks. The US Virgin Islands national flag is often displayed at embassies, outside of businesses associated with US Virgin Islands, and at the homes of people who take great pride in their US Virgin Islands heritage.

Our indoor flags are finished with a pole hem and your choice of with or without golden fringe. Gold fringe is the traditional way to display an indoor flag, however, some people choose without fringe for a simple and clean look that is also less expensive. If you are looking for a complete indoor presentation set, our Build Your Own Indoor International Flag Set program allows you to select a durable nylon indoor US Virgin Islands Flag and choose between premium quality poles, bases, and ornaments, and tassel. For indoor applications, most buyers choose a 3ft. x 5ft. flag with an 8ft. pole, however, if you have a low ceiling, you may opt for a 7ft. pole, which is designed to work with drop ceilings. If you are looking for a very substantial international flag display, our 4ft. x 6ft. indoor flags can be paired with a 9ft. pole for our largest indoor display option.

Our outdoor international flags are finished with a canvas header and brass grommets and are offered in four sizes: 2ft. x 3ft., 3ft. x 5ft., 4ft. x 6ft., and 5ft. x 8ft., to fit any sized flagpole. Typically, outdoor flags are flown outside of government organizations, businesses, and institutions on in-ground and wall-mount flagpoles, however, some people also buy these flags to display their international pride at home. If you are looking for a wall-mount US Virgin Islands flag set to display outside of your home, our Build Your Own Outdoor International Flag Set program will allow you to choose between premium quality 6ft. poles and brackets to display the US Virgin Islands Flag on your front porch. Outdoor flags can also be displayed indoors on interior walls of your home with screws anchored in the wall to attach to the grommets. 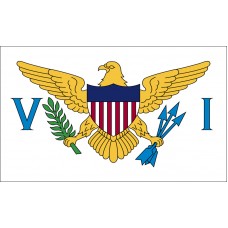 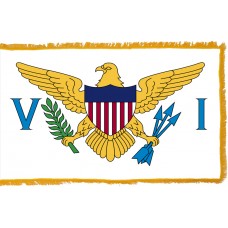 History of the US Virgin Islands Flag

The US Virgin Islands Flag features a white field with a simple version of the Coat of Arms of the United States of America. The coat of arms features a golden American Bald Eagle that is holding a sprig of green laurel in one talon and three arrows in the other talon and has a shield on its breast that is blue with red and white stripes in between a "V" and "I."

The original inhabitants of the US Virgin Islands (officially known as the Virgin Islands of the United States) were the Ciboney, Carib, and Arawaks. The Islands were first discovered in 1493 by Christopher Columbus but were never settled by the Spanish. Christopher Columbus named the islands "Santa Ursula y las once mil virgenes" which translates as "Saint Ursula and her 11,000 virgins." In 1672, the island of St. Thomas was settled by the Danish West India Company, in 1694, the island of St. John was settled and in 1733, the Danish West India Company bought the island of St.Croix from France. In 1754, the islands became Danish Colonies. At the start of WWI, the United States of America approached Denmark to buy the islands as they feared they would get invaded by the Germans during the war. The islands were bought by the Americans from Denmark for 25 million dollars in gold. When the islands were a Dutch Colony, the economy was completely reliant on sugarcane that was produced by the slaves that were brought to the islands. Until slavery was abolished there were approximately 22,867 slaves on St. Croix, 4,634 slaves on St. Thomas, and 2,454 slaves on St. John. The slaves were known as the "Kamina Folk" as "Kamina" symbolized the land that was being cultivated and the black people that were working on the land.

Today, the US Virgin Islands economy is mainly reliant on tourism and is a very popular attraction, especially for shopping.

We offer free images of the US Virgin Islands Flag in four sizes (small, medium, large, and high resolution). These images are distributed royalty free for both personal and educational use and are ideal for use in projects and on websites. If you choose to use one of our images, attribution is appreciated, but not required.

Add the US Virgin Islands Flag to your Website:

The following html code snippets can be copied and pasted to add an image of the US Virgin Islands Flag to your website:

Geographical Location of US Virgin Islands