We carry authentic Bahamas Flags in both indoor and outdoor varieties. Our flags are proudly made in the United States from durable nylon and are printed with vibrant long-lasting inks. The Bahamas national flag is often displayed at embassies, outside of businesses associated with Bahamas, and at the homes of people who take great pride in their Bahamian heritage.

Our indoor flags are finished with a pole hem and your choice of with or without golden fringe. Gold fringe is the traditional way to display an indoor flag, however, some people choose without fringe for a simple and clean look that is also less expensive. If you are looking for a complete indoor presentation set, our Build Your Own Indoor International Flag Set program allows you to select a durable nylon indoor Bahamas Flag and choose between premium quality poles, bases, and ornaments, and tassel. For indoor applications, most buyers choose a 3ft. x 5ft. flag with an 8ft. pole, however, if you have a low ceiling, you may opt for a 7ft. pole, which is designed to work with drop ceilings. If you are looking for a very substantial international flag display, our 4ft. x 6ft. indoor flags can be paired with a 9ft. pole for our largest indoor display option.

Our outdoor international flags are finished with a canvas header and brass grommets and are offered in four sizes: 2ft. x 3ft., 3ft. x 5ft., 4ft. x 6ft., and 5ft. x 8ft., to fit any sized flagpole. Typically, outdoor flags are flown outside of government organizations, businesses, and institutions on in-ground and wall-mount flagpoles, however, some people also buy these flags to display their international pride at home. If you are looking for a wall-mount Bahamas flag set to display outside of your home, our Build Your Own Outdoor International Flag Set program will allow you to choose between premium quality 6ft. poles and brackets to display the Bahamas Flag on your front porch. Outdoor flags can also be displayed indoors on interior walls of your home with screws anchored in the wall to attach to the grommets.

In addition to the flags we offer for purchase, we maintain an archive of the audio and lyrics of the Bahamas National Anthem, historical information about the Bahamas flag, demographic data about Bahamas, and free high resolution images of the Bahamas flag for use in projects and on websites. 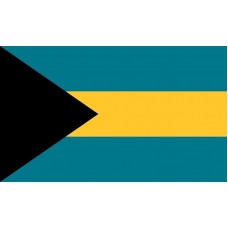 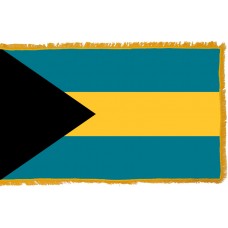 History of the Bahamian Flag

The Bahamian flag consists of 3 equal-sized horizontal bands with the colors, aqua blue, yellow, and aqua blue. On the left side of the flag, there is a black horizontal triangle. The current flag design was adopted on July 10th, 1973, when the Bahamas became independent from the United Kingdom. The aqua blue color on the flag represents the ocean that surrounds the Bahamas, the yellow strip symbolizes the prominent sandy beaches of the 700 Bahamian islands, and the black triangle represents the "strength, vigor and force" of the nation and the people's persistence to develop the island.

On July 10, 1973, The Bahamas gained independence and changed their name from "Bahama Islands" to the "Bahamas." In recognition of their dependence, the country held a contest to design the new Bahamian flag. Instead of just one winner, the flag was a combination of elements from various entries.

During the 18th-19th Century, the Bahamas was a sanctuary for pirates, which the British eventually managed to suppress and convert the islands to a British colony which existed during the period between 1718-1973. During this period, the Bahama Islands used a flag comprised of a blue background with the Union Jack in the canton and the badge of the Bahama Islands featured prominently in the center. The badge featured a British ship chasing away two pirate ships, surrounded by the colonies motto, "Expulsis Piratis Restituta Commercia," which translates from latin to , "Pirates Expelled, Commerce Restored."

Despite the fact that the Bahamas was ruled by the British, many Americans moved to the Bahamas following the American Revolutionary War, many bringing their slaves with them. The British abolished slavery in 1807, however, slavery was not abolished in the Bahamas until 1834. Once slavery was abolished, the Bahamas became a refuge for the freed African slaves.

The Bahamas is geographically positioned on the Tropic of Cancer. The country averages 340 days of sun per year and the temperature of the waters are about 79 degrees Fahrenheit all year round. The capital city of the Bahamas is Naussau, which is home to many beautiful natural features, sights and clear ocean waters. Tourism is the economic engine of the Bahamas, and has made them one of the most prosperous and wealthy countries in the Americas.

The Bahamas is home to some of the clearest waters and most beautiful beaches in the world. Some other popular destinations are the Blue Lagoon Island and Dean's Blue Hole. Blue Lagoon Island is a small private island off the coast of Nassau that offers beautiful beaches and is a relaxing getaway for vacationers. Dean's Blue Hole is the second deepest blue hole in the world with a depth of around 663 feet and featuring deep blue colored waters which results from the increased depth due to a sink hole. The famous and renowned "Lucayan National Park" is another major attraction, home to the longest underwater cave system in the world.

Some travelers will also visit the island to see the famous "Junkanoo" carnival, which is street parade held each year on December 26th and January 1st. Before Slavery was abolished, slaves celebrated Christmas alongside their families with dance, music and costumes; The "Junkanoo" carnival pays tribute to these festivities. Thousands of people are involved in tis event, which takes place in Naussau each year. The parade begins around 1-2am and concludes at 9am. The participants dance through the streets wearing very detailed costumes to celebrate.

Lift up your head to the rising sun, Bahamaland;
March on to glory, your bright banners waving high.

See how the world marks the manner of your bearing!
Pledge to excel through love and unity.

Pressing onward, march together
to a common loftier goal;

Steady sunward, tho' the weather
hide the wide and treachrous shoal.

Lift up your head to the rising sun, Bahamaland,
'Til the road you've trod lead unto your God,
March on, Bahamaland.

We offer free images of the Bahamas Flag in four sizes (small, medium, large, and high resolution). These images are distributed royalty free for both personal and educational use and are ideal for use in projects and on websites. If you choose to use one of our images, attribution is appreciated, but not required.

The following html code snippets can be copied and pasted to add an image of the Bahamas Flag to your website:

Geographical Location of The Bahamas