We carry authentic Congo Republic Flags in both indoor and outdoor varieties. Our flags are proudly made in the United States from durable nylon and are printed with vibrant long-lasting inks. The Congo Republic national flag is often displayed at embassies, outside of businesses associated with Congo Republic, and at the homes of people who take great pride in their Congo Republic heritage.

Our indoor flags are finished with a pole hem and your choice of with or without golden fringe. Gold fringe is the traditional way to display an indoor flag, however, some people choose without fringe for a simple and clean look that is also less expensive. If you are looking for a complete indoor presentation set, our Build Your Own Indoor International Flag Set program allows you to select a durable nylon indoor Congo Republic Flag and choose between premium quality poles, bases, and ornaments, and tassel. For indoor applications, most buyers choose a 3ft. x 5ft. flag with an 8ft. pole, however, if you have a low ceiling, you may opt for a 7ft. pole, which is designed to work with drop ceilings. If you are looking for a very substantial international flag display, our 4ft. x 6ft. indoor flags can be paired with a 9ft. pole for our largest indoor display option.

Our outdoor international flags are finished with a canvas header and brass grommets and are offered in four sizes: 2ft. x 3ft., 3ft. x 5ft., 4ft. x 6ft., and 5ft. x 8ft., to fit any sized flagpole. Typically, outdoor flags are flown outside of government organizations, businesses, and institutions on in-ground and wall-mount flagpoles, however, some people also buy these flags to display their international pride at home. If you are looking for a wall-mount Congo Republic flag set to display outside of your home, our Build Your Own Outdoor International Flag Set program will allow you to choose between premium quality 6ft. poles and brackets to display the Congo Republic Flag on your front porch. Outdoor flags can also be displayed indoors on interior walls of your home with screws anchored in the wall to attach to the grommets. 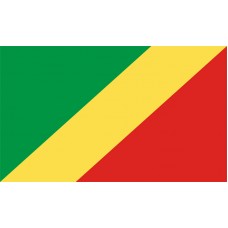 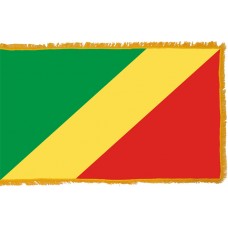 History of the Congo Republic flag

The Congo Republic flag consists of three colors: green, yellow, and red. A diagonal yellow stripe starts from the bottom hoist-side corner of the flag and runs to the top fly-side corner. The triangle formed above the stripe is green, while the triangle beneath is red. From 1880, the country was a French Protectorate until 1910, when it became a colony of French Equatorial Africa. The current design of the Congo Republic flag was adopted when the country gained independence from France. The new flag was adopted on September 12th, 1959 to replace the French tricolor flag. The designed remained in use until 1970, when the country became, The People's Republic of Congo. This new communist country used a red flag with a green coat of arms in the upper hoist-side corner. In 1991, due to economic problems and breakdowns, the People's Republic of the Congo collapsed and the original flag adopted in 1959, was restored.

The green color of the flag symbolizes the rich agriculture of the country and the rainforests and the yellow color signifies the friendship and nobility of the people. There has been no formal explanation for the red color. The Congo Republic flag utilizes the Pan-African colors including the same colors as the Ethiopian flag, which is the oldest independent country in Africa. The Congo Republic flag, is the only national flag that has a diagonal design. To celebrate their independence from the French, the flag was first raised on top of the building that was previously the home of the French High Commission.

The Congo Republic is located in Central Africa and shares borders with Gabon, the Atlantic Ocean, Cameroon, Central African Republic, Democratic Republic of Congo, and the Angolan exclave of Cabinda. The largest and capital city is Brazaville, which is located on the Congo River. Brazzaville obtained its name from the French explorer, Pierre Savorgnande Brazza, who helped establish the country as a French Protectorate. The capital city faces the capital of the Democratic Republic of Congo (Kinshasa) making them the two closest national capitals, following only Rome and the Vatican City.

The Congo Republic is mainly covered by rainforest and is home to many beautiful sights and landmarks. Diosso Gorge is a natural formation that is sometimes referred to as the "Grand Canyon of the Congo." The formation features red ridges and cliffs as well as rainforest. The Basilica of St. Anne monument in Brazzaville is an architecturally stunning building that draws many visitors each year. Likewise, the Odzala National Park is one of the most important areas for the conservation of forest elephants and western gorillas in Central Africa.

We offer free images of the Congo Republic Flag in four sizes (small, medium, large, and high resolution). These images are distributed royalty free for both personal and educational use and are ideal for use in projects and on websites. If you choose to use one of our images, attribution is appreciated, but not required.

The following html code snippets can be copied and pasted to add an image of the Congo Republic Flag to your website: