We carry authentic Equatorial Guinea Flags in both indoor and outdoor varieties. Our flags are proudly made in the United States from durable nylon and are printed with vibrant long-lasting inks. The Equatorial Guinea national flag is often displayed at embassies, outside of businesses associated with Equatorial Guinea, and at the homes of people who take great pride in their Equatorial Guinea heritage.

Our indoor flags are finished with a pole hem and your choice of with or without golden fringe. Gold fringe is the traditional way to display an indoor flag, however, some people choose without fringe for a simple and clean look that is also less expensive. If you are looking for a complete indoor presentation set, our Build Your Own Indoor International Flag Set program allows you to select a durable nylon indoor Equatorial Guinea Flag and choose between premium quality poles, bases, and ornaments, and tassel. For indoor applications, most buyers choose a 3ft. x 5ft. flag with an 8ft. pole, however, if you have a low ceiling, you may opt for a 7ft. pole, which is designed to work with drop ceilings. If you are looking for a very substantial international flag display, our 4ft. x 6ft. indoor flags can be paired with a 9ft. pole for our largest indoor display option.

Our outdoor international flags are finished with a canvas header and brass grommets and are offered in four sizes: 2ft. x 3ft., 3ft. x 5ft., 4ft. x 6ft., and 5ft. x 8ft., to fit any sized flagpole. Typically, outdoor flags are flown outside of government organizations, businesses, and institutions on in-ground and wall-mount flagpoles, however, some people also buy these flags to display their international pride at home. If you are looking for a wall-mount Equatorial Guinea flag set to display outside of your home, our Build Your Own Outdoor International Flag Set program will allow you to choose between premium quality 6ft. poles and brackets to display the Equatorial Guinea Flag on your front porch. Outdoor flags can also be displayed indoors on interior walls of your home with screws anchored in the wall to attach to the grommets. 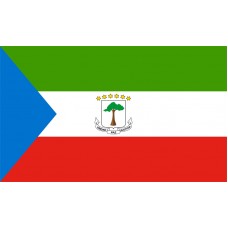 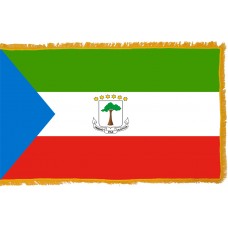 History of The Equatorial Guinea flag

The Equatorial Guinea flag has been in use since 1979, and serves a representation of the young country's independence. The flag features three equally sized horizontal bands, a triangle at the left, and the country's coat of arms in the center. The triangle is blue and points inwards, and the three bands are green at the top, white in the middle, and red at the bottom.

The flag's blue triangle is positioned on the left hand, or hoist side flag and is designed to point inwards from the flagpole when the flag is hoisted. In the case of Equatorial Guinea, the blue triangle represents an arrow which connects the country's island and mainland parts. The blue color represents the sea.

The Portuguese navigator Fernando Po is thought to be the first European to set foot in Equatorial Guinea, which is located in the south Atlantic Ocean, off the west coast of Africa. He gave his name to one of the islands which form part of the country. Fernando Po was in search of a sea route to India. He was one of the first explorers to set off from a European country to find wealth in the New World. He landed in what is now called Bioko in 1472, 20 years before Christopher Columbus landed in the Americas. Bioko is one of the six islands that form Equatorial Guinea, and is represented as a star on the country's coat of arms.

The other five stars on the Equatorial Guinea flag represent the country's mainland and four of its largest islands. These territories were transferred from the Portuguese to the Spanish empire in 1778. The area was a vital part of the slave trade which fueled the growth of the Portuguese, Spanish, and British empires. Equatorial Guinea is now valued as having Africa's largest oil reserves.

The green band at the top of this flag represents the natural beauty of the country, the white band represents peace, and the red represents the bloodshed by freedom fighters who won independence. As with most countries in Africa, Equatorial Guinea's valuable natural resources have been and continue to be highly sought after. The country has seen a lot of violence and upheaval, as foreign powers vie for its oil reserves resources.

Equatorial Guinea has been under the rule of many empires, and is a french-speaking country. The motto on the coat of arms of the Equatorial Guinea flag reads Unidad, Paz, Justicia, or unity, peace, and justice. In combination with the flag's other symbols, these words symbolize both the country's past and hopeful future.

We offer free images of the Equatorial Guinea Flag in four sizes (small, medium, large, and high resolution). These images are distributed royalty free for both personal and educational use and are ideal for use in projects and on websites. If you choose to use one of our images, attribution is appreciated, but not required.

The following html code snippets can be copied and pasted to add an image of the Equatorial Guinea Flag to your website: