We carry authentic Hungary Flags in both indoor and outdoor varieties. Our flags are proudly made in the United States from durable nylon and are printed with vibrant long-lasting inks. The Hungary national flag is often displayed at embassies, outside of businesses associated with Hungary, and at the homes of people who take great pride in their Hungary heritage.

Our indoor flags are finished with a pole hem and your choice of with or without golden fringe. Gold fringe is the traditional way to display an indoor flag, however, some people choose without fringe for a simple and clean look that is also less expensive. If you are looking for a complete indoor presentation set, our Build Your Own Indoor International Flag Set program allows you to select a durable nylon indoor Hungary Flag and choose between premium quality poles, bases, and ornaments, and tassel. For indoor applications, most buyers choose a 3ft. x 5ft. flag with an 8ft. pole, however, if you have a low ceiling, you may opt for a 7ft. pole, which is designed to work with drop ceilings. If you are looking for a very substantial international flag display, our 4ft. x 6ft. indoor flags can be paired with a 9ft. pole for our largest indoor display option.

Our outdoor international flags are finished with a canvas header and brass grommets and are offered in four sizes: 2ft. x 3ft., 3ft. x 5ft., 4ft. x 6ft., and 5ft. x 8ft., to fit any sized flagpole. Typically, outdoor flags are flown outside of government organizations, businesses, and institutions on in-ground and wall-mount flagpoles, however, some people also buy these flags to display their international pride at home. If you are looking for a wall-mount Hungary flag set to display outside of your home, our Build Your Own Outdoor International Flag Set program will allow you to choose between premium quality 6ft. poles and brackets to display the Hungary Flag on your front porch. Outdoor flags can also be displayed indoors on interior walls of your home with screws anchored in the wall to attach to the grommets.

In addition to the flags we offer for purchase, we maintain an archive of the audio and lyrics of the Hungary National Anthem, historical information about the Hungary flag, demographic data about Hungary, and free high resolution images of the Hungary flag for use in projects and on websites. 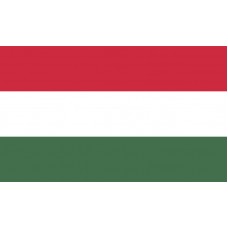 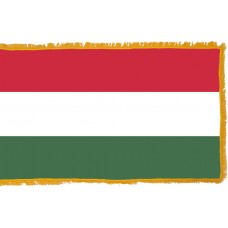 History of the Hungary Flag

The Flag of Hungary consists of three colors which sit horizontally and are of equal size. The colors are red, white, and green. This has been the country's official flag since May 23rd, 1957 and was fully adopted on October 1st, 1957.

The tricolor concept of the flag was based on the French flag reflecting ideas of the French revolution, whilst the red, white, and green colors are borrowed from the ancient Hungarian coat of arms. The stripes are horizontal in style to stop any confusion with Italy's flag of the same colors.

There have been various attributes to the colors over time, including folklore listing red as a sign of strength, white being the faithful representative, and green being a color of hope. A second interpretation is that the red represents the blood spilled in the fatherland, with the white symbolizing freedom, and the green being symbolic of the pasture land in Hungary.

The National Freedom Movement existed in Hungary before 1848 and the Hungarian revolution. At that time an independent republic was formed which was in opposition to the monarchy and in conflict with the Habsburg Empire.

The period after this of 1848-1849 was a time of revolution with the Hasburg Empire (also known as The House of Austria), having control over Hungary and as a result, the Austrian Emperor banned the three-color flag. Eventually a compromise was reached in 1867 which legalized the flag allowing it to become the official flag of Hungary again but with some minor changes. The flag now bore a Minor Arms called the Kossuth Coat of Arms depicting archangel supporters which remained on the flag until the cessation of the Habsburg Empire in 1918.

Turbulent years were to follow with many small changes on the flag, including a solid red banner which was used for just four and a half months in 1919, representing the Hungarian Soviet Republic. There was also a Coat of Arms with a Crown added for a short period which was replaced by a red star when the Communists ruled in 1949. A hammer and sickle were also added as part of a new coat of arms but after the anti-Soviet uprising in 1949 the hammer and sickle were cut from the flag leaving a hole to act as a symbol of the revolution.

The Stalinist restoration followed and in 1957 were defeated by the Soviet Red Army. The new government designed a new coat of arms, which never officially made it on to the flag. As such, since 1957, the official flag has remained the pure red, white, green tricolor flag.

Hungary is bordered by Austria, Romania, Croatia, Serbia, Slovakia, and the Ukraine. It is located in Central Europe and the capital city is Budapest. The language is known as Magyar, directly descended from the Huns dialect. There are two languages in Europe related to it, these are Finnish and Estonian.

O, my God, the Magyar bless
With Thy plenty and good cheer!
With Thine aid his just cause press,
Where his foes to fight appear.
Fate, who for so long did'st frown,
Bring him happy times and ways;
Atoning sorrow hath weighed down
Sins of past and future days.

By Thy help our fathers gained
Karpat's proud and sacred height;
Here by Thee a home obtained
Heirs of Bendeguz, the knight.
Where'er Danube's waters flow
And the streams of Tisza swell
Arpad's children, Thou dost know,
Flourished and did prosper well.

But, alas! for our misdeed,
Anger rose within Thy breast,
And Thy lightnings Thou did'st speed
From Thy thundering sky with zest.
Now the Mongol arrow flew
Over our devoted heads;
Or the Turkish yoke we knew,
Which a free-born nation dreads.

O, how often has the voice
Sounded of wild Osman's hordes,
When in songs they did rejoice
Oâ€™er our heroes' captured swords!
Yea, how often rose Thy sons,
My fair land, upon Thy sod,
And Thou gavest to these sons,
Tombs within the breast they trod!

Though in caves pursued he lie,
Even then he fears attacks.
Coming forth the land to spy,
Even a home he finds he lacks.
Mountain, vale -- go where he would,
Grief and sorrow all the same --
Underneath a sea of blood,
While above a sea of flame.

'Neath the fort, a ruin now,
Joy and pleasure erst were found,
Only groans and sighs, I trow,
In its limits now abound.
But no freedom's flowers return
From the spilt blood of the dead,
And the tears of slavery burn,
Which the eyes of orphans shed.

Pity, God, the Magyar, then,
Long by waves of danger tossed;
Help him by Thy strong hand when
He on grief's sea may be lost.
Fate, who for so long did'st frown,
Bring him happy times and ways;
Atoning sorrow hath weighed down
All the sins of all his days.

We offer free images of the Hungary Flag in four sizes (small, medium, large, and high resolution). These images are distributed royalty free for both personal and educational use and are ideal for use in projects and on websites. If you choose to use one of our images, attribution is appreciated, but not required.

The following html code snippets can be copied and pasted to add an image of the Hungary Flag to your website: